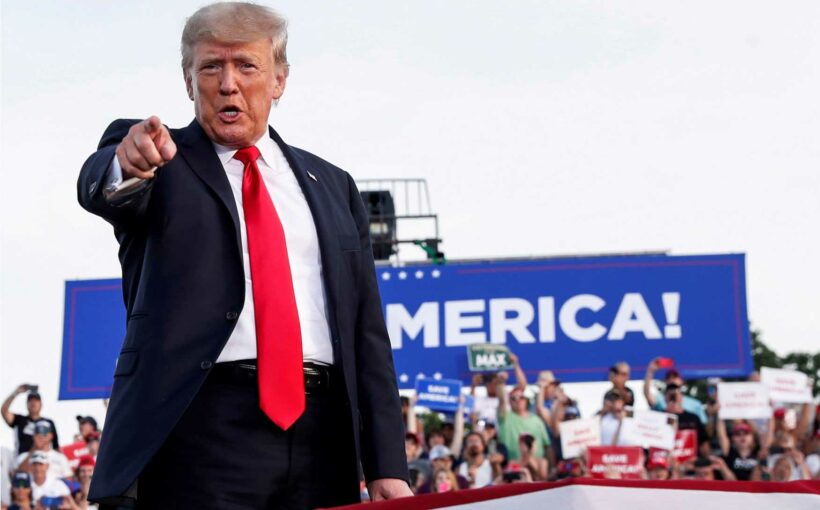 A dark money group that once promoted former President Donald Trump's policies is joining forces with a think tank headed in part by former key members of his administration, including Larry Kudlow and Linda McMahon.

America First Works launched after Trump's 2016 victory and was previously known as America First Policies. It was reformed and changed its name after Trump lost his bid for reelection.

Now the group is working directly with another freshly formed nonprofit organization, think tank America First Policy Institute, according to Ashley Hayek, a Trump campaign veteran who has a leadership role at America First Works and is also chief engagement officer for the think tank.

Other leaders at the AFPI think tank include:

Neither America First Works nor America First Policy Institute is required by law to publicly disclose their donors. America First Works has given money to a group that claimed to have helped write Georgia's voting law and another organization that is pushing to amend the Constitution to further impose limits on the federal government's powers.

The groups' collaboration comes as Trump considers running for the White House again in 2024. They could provide another platform for Trump and his allies to keep his "America First" agenda in the spotlight. Members of the think tank have been moving ahead with publicly promoting these pro-Trump policies through op-eds, interviews and pre-recorded videos.

While it's unclear how much cash AFPI has on hand, Axios reported that it has a first year budget of $20 million. It was launched earlier this year. America First Works finished 2020 with just over $7 million in assets, according to their annual 990 tax filing.

Hayek told CNBC that America First Works was formed "as a new organization to work closely with AFPI" and as "an extension of AFPI, it is entirely focused on advancing policy at all levels of government, including to promote economic opportunity, school choice, affordable healthcare, foster care reform, election integrity, and criminal justice reform."

Trump himself has openly supported the America First Policy Institute.

The former president spoke during a gala for the nonprofit earlier this month at his private Mar-a-Lago resort in Florida. While he promoted accomplishments from his time in office, some members of the crowd cheered "Let's go Brandon," a slogan used by pro-Trump conservatives to mean "F***k Joe Biden," according to a video of his remarks posted by the group. Trump also took aim at Senate Minority Leader Mitch McConnell, R-Ky., calling him an "old crow."

The America First Policy Institute says its research focuses on analyzing the policies that Trump and his allies termed as "America First." They have pushed back on elements of President Joe Biden's agenda, including with how his administration has handled illegal border crossings and a Covid vaccine mandate for private businesses. The group recently published a video that takes aim at Biden's pick for comptroller of the currency, Saule Omarova, who has been subject to attacks on her upbringing as well as critiques of her policy ideas.

The think tanks policy priorities include criminal justice reforms, fighting back against Big Tech companies and lowering taxes. The group also lists as their priorities as "election integrity" and "critical race theory" as areas of concern.

The group has supported voting laws recently passed in Texas that critics say restrict access to the ballot box. In op-eds posted on AFPI's website, leaders of the think tank have called on parents to fight back against the teachings of critical race theory, a college and post-graduate academic that examines the impact of racism on American institutions and policies. It became a hot-button issue that was used by Republican Glenn Youngkin in his successful gubernatorial campaign in Virginia.

Almost half of the nearly $40 million in grants from America First Works last year went to its affiliated super PAC, America First Action, according to AFW's most recent 990 filing. America First Works also donated to other conservative organizations that continue to wield influence across the country. The filing was first reported on by the Center for Public Integrity.

Previous tax records show that America First Works, formerly known as America First Policies, never doled out this much cash in one year. The 990 form shows that as of the end of 2020, it was also chaired by McMahon. Longtime Republican operative Brian O. Walsh is listed as the president of the group.

The nonprofit also had a record fundraising year, raking in just over $50 million, with the form listing top individual donations of $5 million. Just like other dark money groups, America First Works is not required to publicly disclose the names of their donors. MapLight reported that previous corporate donors to America First Policies included utilities firm Southern Company, CVS Health and Dow Chemical.

Heritage Action has also claimed credit for helping create voting laws that advocates say limit access to the ballot box. Mother Jones obtained a video showing Jessica Anderson, the executive director of Heritage Action, speaking to donors about how the group helped craft such laws in Georgia and other states.

"In some cases, we actually draft them for them, or we have a sentinel on our behalf give them the model legislation so it has that grassroots, from-the-bottom-up type of vibe," Anderson is seen saying on the recording.

Heritage Action's website takes aim at the "For the People Act,"  also known as H.R. 1, which was introduced by Democrats and passed in the House. Democrats say the legislation would help people have better access to the ballot box. It is unlikely to pass in the Senate since Democrats do not have enough votes to overcome a Republican filibuster. The site features a script for anyone interested in volunteering to call up their House or Senate representative to push back against the Democratic bill.

America First Works also gave $250,000 to a group called the Convention of States Action, which has been pushing state lawmakers to bring together a convention to amend the U.S. Constitution to limit the government's powers.

"Washington, D.C., is broken. The federal government is spending this country into the ground, seizing power from the states and taking liberty from the people. It's time for we the people to take a stand against tyranny with a coordinated, nationwide effort to curb the unrestrained and growing power of the federal government," Convention of States Action's pocket guide says. The group's website says that over a dozen states have passed Convention of State resolutions that could lead to an Article V convention.

The New American Populist, a nonprofit group that claims to want to "empower citizens and encourage greater involvement in the government process," received just over $1 million from America First Works in 2020.

Jeff Webb, the group's president, has also funded two Republican super PACs, including one with an identical name as the nonprofit he runs, according to data from the nonpartisan Center for Responsive Politics. Webb is the founder of cheerleading company Varsity Spirit and is the president of the International Cheer Union.

Webb, of Tennessee, has ties to Trump ally Charlie Kirk and his own organization, Turning Point USA, a nonprofit that tries to promote conservative voices on high school and college campuses.

Webb was a speaker at Turning Point's Student Action Summit earlier this year. His speech took aim at progressives, saying they want to alter capitalism.

"The left's real goal is to reshape American capitalism. To move us to a more socialist model. One where the American economic engine runs more like a European system. They do so in the name of equity," Webb told the crowd at the time.

Webb joined Kirk on the Turning Point USA's podcast in March to discuss, among other things, how populism is gaining power in the Republican Party post Trump's loss.

"I think there's no doubt that the populist movement within the party is winning. And it's irreversible," Webb said then.