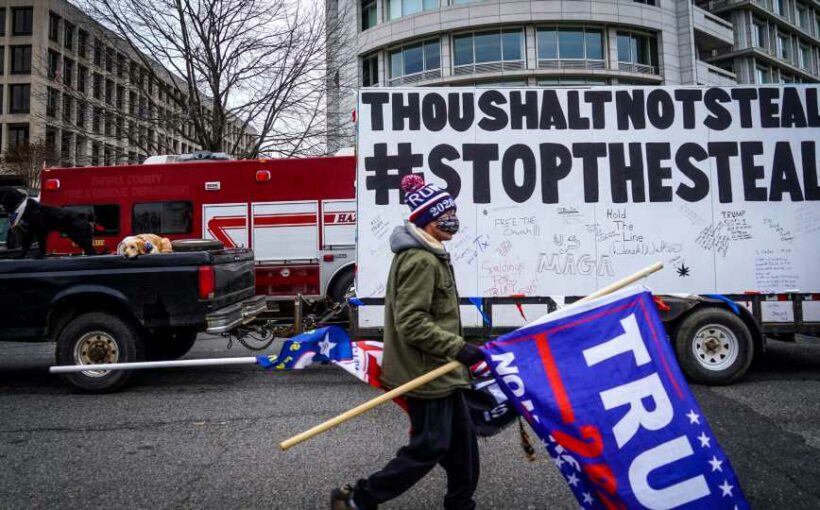 It’s been about a year now since Donald Trump started ramping up what had been an already simmering campaign to destroy the public’s faith in U.S. elections. He’s certainly convinced his followers that the 2020 election was flat-out stolen by pro-Biden communists, but maybe even more concerning is the degree to which he’s filled the air with a vague sense that may be some reason to doubt all elections being held in the world’s longest-running Democracy. A much larger portion of the country than many realize is inhaling the shit out of it.

According to a Politico/Morning Consult poll released Wednesday morning, 35 percent of voters — including 60 percent of Republicans — think the 2020 election should “definitely” or “probably” be overturned. One more time for the people in the back: Over one-third of voters believe the 2020 election was illegitimate, despite President Biden having cleaned up in the Electoral College and winning the popular vote by over seven million, and despite countless audits, lawsuits, and investigations turning up no evidence of significant fraud.

The poll is a sobering reminder of the effectiveness of Trump’s relentless messaging that the 2020 election was fraudulent, which has now become the chief animating principle of the Republican Party. Underlying this principle is an equally sinister proposition: that violence is the proper corrective to elections that don’t go the way Trumps followers would like. Some conservative lawmakers are saying it implicitly by not doing more to repudiate the Jan. 6 insurrection and support the House committee investigating it. Some, like Rep. Marjorie Taylor Greene (R-Ga.), have said it more explicitly.

Their followers are listening.

During a Senate Committee on Rules and Administration hearing on Tuesday about the emerging threat to America’s election administration, Chairwoman Amy Klobuchar (D-Minn.) spoke of the threats election workers have received across the country, noting that one in three feel unsafe because of their job, while one in six have received threats of violence. “In the face of these threats confronting our elections, it is up to us to take action to address this head-on,” said the senator, who in August introduced the Protecting Election Administration from Interference Act.

Top election officials have been bombarded with threats, too. CNN reported on Tuesday that secretaries of State across the nation, as well as their staffs, are living in fear because of constant death threats from election conspiracy theorists. Kathy Boockvar, who was Pennsylvania’s secretary of State until February, told CNN she didn’t feel safe walking her dog on the street. Colorado Secretary of State Jena Griswold has had to use her office’s budget to contract private security after receiving numerous death threats. Jocelyn Benson, Michigan’s secretary of State, has at times had to have 24-hour police protection. Last December, dozens of people showed up outside her house.

Biden won Michigan handily, but the state’s Republicans are pushing for a forensic audit that would cost millions. One of the movement’s leaders, Matthew DePerno — also known as the man whose lawsuit inspired the conspiracy theory that Dominion Voting Systems rigged the election in Biden’s favor — is running against Benson to become secretary of State. Regardless of how that election turns out, Republicans have already begun weeding out their party’s own county election officials who acknowledged Biden’s victory as legitimate, a recent investigation by The Detroit News revealed. They’re being replaced by Trump loyalists.

One of the few states that may be racked with more electoral tension than Michigan is Arizona, which has spent most of the year conducting its own forensic audit, a costly circus that has yielded no evidence of significant fraud. Secretary of State Katie Hobbs also spoke to CNN about the threats she has received. She appeared at the Senate hearing on Tuesday, as well, noting that the state is hemorrhaging election workers because of the incessant abuse. “We’re already seeing high turnover among election staff,” she said. “I fear that many more will reach a breaking point and decide that this line of public service is no longer worth it.”

The problem for Republicans who have followed Trump down the anti-democracy rabbit hole is that their voters may now also feel like it’s no longer worth it. The Politico story around the poll results released Wednesday morning outlines just how scared some Republicans, including Rep. Greene, are that the party’s promotion of election conspiracy theories may be convincing their supporters to stay at home.

“When my fellow Republicans are focused on the wrong things, when they’re focused on conspiracies about secret algorithms on voting machines, and they’re focused on ideas there is a group of ballots printed in China snuck in the back door of the board of elections — all those things are easily disproven,” Republican Ohio Secretary of State Frank LaRose told Politico. “But a focus on those things distracts from what I consider the real concerns about election integrity.”

Republican voters not participating would certainly be good for the chances of Democratic candidates promising to support voting rights legislation and other measures to safeguard America’s election systems. Make no mistake, though: Voters losing faith is the democratic process is very, very bad. Trump and Republicans seem determined to make it get worse — and, perhaps, more violent — as 2022 and 2024 draw near.