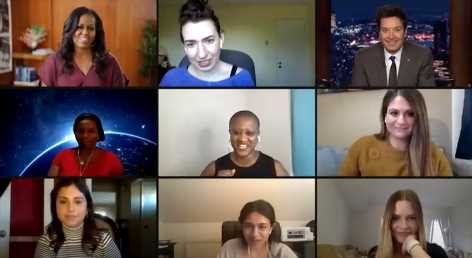 Michelle Obama and Jimmy Fallon don't need an invitation when it comes to Zoom meetings!

On Thursday's episode of The Tonight Show Starring Jimmy Fallon, the late-night host and the former first lady had fun crashing a series of online group meetings.

"We're about to surprise some people on Zoom who think they're in a focus group about a cooking show. They have no idea this is going to happen," said Fallon, 46.

For their first unexpected visit, the duo pretended like they were about to sit down for an interview.

"Michelle, thank you for coming on the show, I'm excited for our interview," Fallon said, as the rest of the people on the Zoom call tried to figure out what was going on.

"Thanks so much for having me," replied Obama, 57, before addressing the elephant in the room. "Are these all your friends?" she asked Fallon. Keeping up the ruse, Fallon replied, "I thought these were your friends."

"Is this real?" asked one person in the Zoom call.

"It is real. We're in the wrong Zoom call," the host said, as he and Obama made a swift departure from the room.

Switching it up, the pair went on to playfully disguise themselves upon first entering another meeting room, with Obama hiding her face behind her best-selling memoir, Becoming.

After slowly revealing herself to the group, the former first lady looked over to Fallon — who was hiding behind a copy of her husband Barack Obama's A Promised Land.

"Jimmy, wrong book!" she exclaimed, before he said, "I think we're in the wrong Zoom."

"No, you're in the right Zoom," interjected one person, while another added, "Stay!"

Want to get the biggest stories from PEOPLE every weekday? Subscribe to our new podcast, PEOPLE Every Day, to get the essential celebrity, entertainment and human interest news stories Monday through Friday. In her new show, which began streaming Tuesday, she helps kids learn how to prepare healthy foods, alongside puppets and celebrity guest chefs.

"Waffles + Mochi, the entire concept is fun. It's approachable, it's an adventure, it's exciting, it's funny," she recently told PEOPLE. "More importantly, it's something that I would watch even if no kids were around."