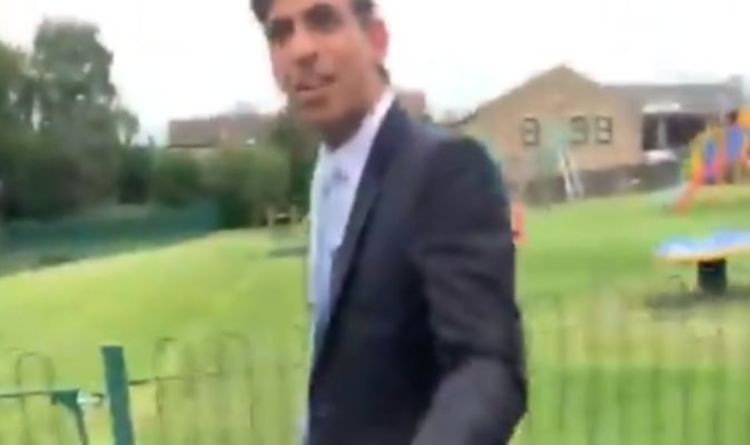 A Green New Deal Rising activist who is being called Fatima online confronted Rishi Sunak as he walked through a park with his aides and demanded he addressed the climate crisis by increasing green policy funding. Fatima said she wanted him to invest in the green economy which the calm Chancellor told her to look at the Prime Minister’s “fantastic” 10-point plan. The video, seen over 100,000 times on social media, saw Mr Sunak list of the Government’s green transport plans off the cuff before he was being accused of “running away” by Fatima who noted she was “terrified” for the future.

In the video, Fatima was calling for Mr Sunak to invest in the green economy and accused him of blocking it.

Mr Sunak told Fatima to look at the Prime Minister’s “fantastic” 10-point plan which will try to make the UK net-zero by 2050.

The plan also will look at advancing offshore wind farms, the creation and adoption of more zero-emission vehicles and investment into carbon capture technology.

Fatima says there is “no time” to implement the 10-point plan as the pair went back and forth on spending figures.

The green activist pointed out Mr Sunak was investing £27billion into new roads but alleged he was only spending £5billion on green policies.

She wondered if the priorities were right and added she was “terrified” for the future.

The pair again went back and forth on electric vehicles and charging points with Mr Sunak eventually wishing her a goodbye.

Fatima accused the Chancellor of “running away” and called it “really sad”.

Viewers online were split on the green issues but the majority praised Mr Sunak for how he calmly handled the situation.

One wrote: “I don’t like the guy at all but he handled it better than most.”

Another added: “He handled that well, nothing he said would have pleased somebody ready to attack after every answer.”

But supporters of Fatima rallied behind her and attacked Mr Sunak for refusing to answer her questions directly.

One wrote: “Top work for calling Rishi Sunak out, I can’t thank you enough.

“His pathetic responses prove that he has zero understanding of the climate and ecological crisis and simply sees it as a PR issue.

“This makes him unfit for high office.”