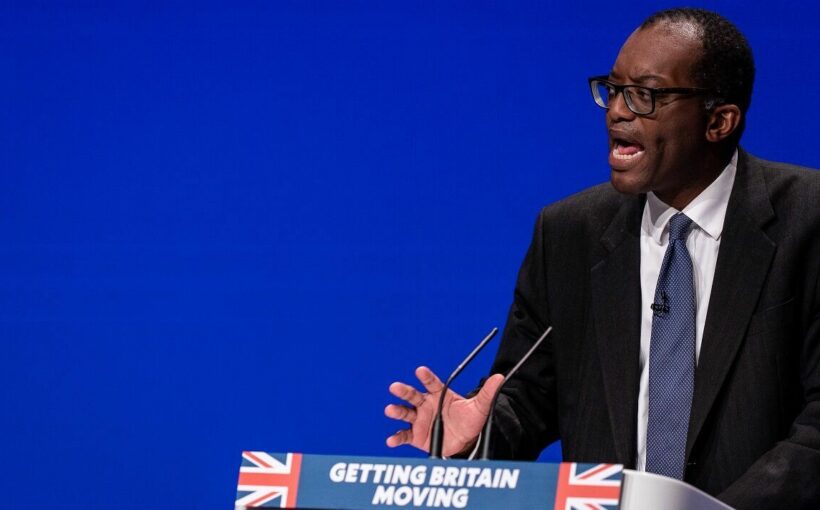 The embattled Chancellor insisted the measures were not “irresponsible” and would deliver much-needed growth for Britain. His set-piece speech at the Conservative Party conference came just hours after he abandoned his plan to scrap the 45p income tax rate for people earning more than £150,000 to stave off a mounting Tory revolt.

Mr Kwarteng told the audience in Birmingham: “What a day. It has been tough but we need to focus on the job in hand.

“We need to move forward, no more distractions, we have a plan and we need to get on and deliver it.”

But he acknowledged what he had put forward only 10 days ago had “caused a little turbulence” – comments which led to some laughter in the audience.

His mini-Budget triggered turmoil in the City and was criticised by the International Monetary Fund, resulting in a £65billion emergency intervention by the Bank of England to restore order. 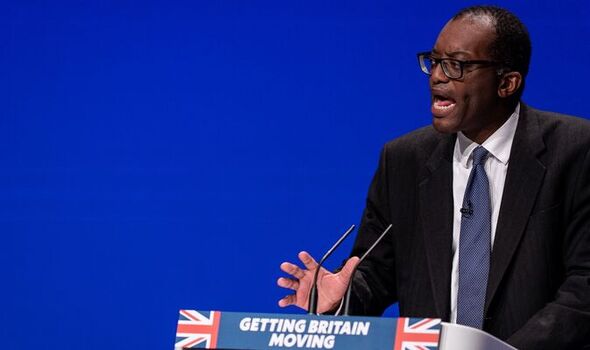 But it was the 45p rate that attracted the biggest political backlash, with senior Tory Michael Gove spearheading a revolt to ditch the plan.

Mr Kwarteng said: “I get it. I get it. We are listening and have listened, and now I want to focus on delivering the major parts of our growth package.”

He defended the concept to cut taxes in the search for economic growth. Despite the U-turn on the 45p rate, he said he is still committed to taking 1p off the basic rate of income tax, reversing April’s increase in national insurance and scrapping the planned increase in corporation tax.

The Chancellor told the conference: “While we all believe in growth, we as Conservatives also believe that it is an important principle that people should keep more of the money they earn.

“That isn’t radical, that isn’t irresponsible. It is a deeply held belief that we all share as Conservatives.

“We were faced with a 70-year high tax burden.We were confronted with low growth and the path we were on was clearly unsustainable. So that’s why we’re cutting taxes for working people.

“We needed a new approach focused on raising economic growth because that is the only real way to deliver opportunities, to deliver higher wages, to deliver more jobs and, crucially, to deliver that revenue to fund our precious public services.

“It is the best and only way of achieving long-term fiscal sustainability. It is only by raising economic growth that we will spread opportunity and prosperity to every corner of our country.”

The stability that the announcement of his U-turn will bring will be a boost right across the board. It was particularly pleasing to pensioners, who had seen thousands wiped off their retirement pots.

Chloe Smith, the Work and Pensions Secretary, speaking from the main stage of the conference, had stressed how “protecting the most vulnerable” is a priority for her. She noted the Government has confirmed that pensions “will again be supported by the triple lock”.

Ms Smith went on: “I can say today that, as a part of continuing what we’ve done with our broader cost-of-living payments, to help the pensioners, to help the disabled people, to help those on the lowest incomes, we are making the next payments in the month of November and I know that will be welcome news to many.

“We do understand that these are very anxious times for people, we know that people are struggling with some of the costs that are rising. That’s why protecting the most vulnerable is a vital priority for me and to this Government.”

Mr Kwarteng declined to reveal whether benefits will be increased in line with inflation. He insisted during a radio interview that he is “not committed to any spending”.

Failing to keep pace with rising prices would leave some of the poorest households facing a real-terms cut in their incomes. Pressed on the issue of benefits uprating, Mr Kwarteng said: “What we are focused on is the growth plan, we have got a medium-term plan which will set out more spending policies in the near future.”

John O’Connell, chief executive of the TaxPayers’ Alliance, said: “The Chancellor was right to try to reassure taxpayers of his plans for growth. But without a clear strategy to control spending, there can be no path to economic prosperity. Kwasi now needs to lay out his roadmap to get the cost of the government crisis under control.”

Mark Littlewood, from free-market think tank the Institute of Economic Affairs, said: “The Chancellor is right that there is a need for radical reform to jumpstart our economic growth – a tax-cutting, supply-side reforming agenda will be essential to boosting Britain’s prosperity.”

But shadow chancellor Rachel Reeves called for Mr Kwarteng and Liz Truss to reverse “their whole economic, discredited trickle-down strategy” claiming the U-turn had come “too late for the families who will pay higher mortgages for years to come”.

Chief Secretary to the Treasury Chris Philp also declined to say whether benefits will be uprated in line with inflation next year.

Mr Kwarteng insisted he had “not at all” considered resigning despite the scrapping of the key part of his financial plans.