Home » Politics » ‘What we waiting for!’ Britons demand Truss trigger Article 16 – ‘No more talks to be had’ 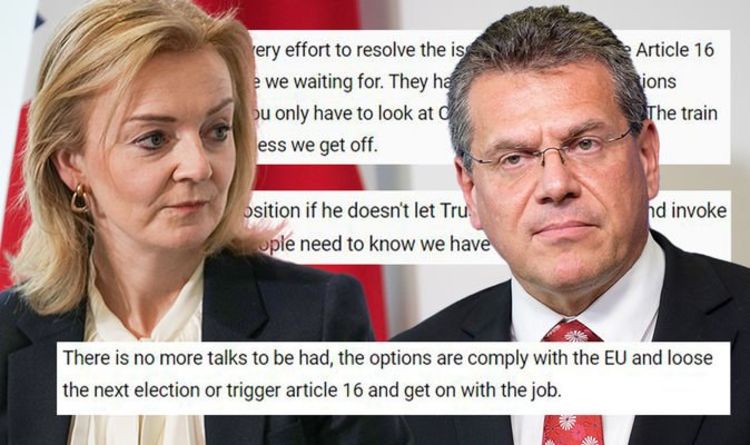 The UK’s Foreign Secretary Liz Truss, who took over responsibility for Brexit talks with the EU last month following the departure of Lord Frost, is coming under increased pressure as talks with Brussels continue to collapse. The Article 16 safeguard mechanism allows one side to unilaterally suspend the rules of the treaty if a deal cannot be agreed upon. Henry Hill, news editor of the British right-wing blog Conservative Home, wrote: “Having this decision in Truss’s hands rather than Frost’s does change the calculation in a potentially dangerous way, for one simple reason: she is a contender for the Conservative leadership, and he was not.

“This does not mean that the Foreign Secretary will conduct the negotiations with that fact solely or even uppermost in mind.

“But she surely cannot help but factor it into her calculations.

“Being seen to roll over for Brussels will do her prospects no good; standing up to the Eurocrats has seldom damaged the standing of a Conservative politician with the party selectorates, in the Commons or the country.”

He argued that as a potential leader, Ms Truss now has the “personal motivation” to stand up to the EU – regardless of the wishes of Prime Minister Boris Johnson.

Now Britons have had enough and have demanded Ms Truss ramp up the pressure on the EU by finally triggering Article 16 of the Northern Ireland Protocol.

Reacting to our initial story, Express reader Denal raged: “If the EU don’t make every effort to resolve the issue the rules require Article 16 to be invoked.

“What are we waiting for? They have not entered negotiations honestly for 6 years.

“You only have to look at Canada and Switzerland.

“The train will roll on for years unless we get off.”

Several others warned voter support for the Tories could crumble if the UK doesn’t act now in talks with the EU.

Express reader Flash wrote: “There are no more talks to be had.

“The options are comply with the EU and loose the next election or trigger Article 16 and get on with the job.”

Trig said: “Boris is in a no-win position. “

If he doesn’t let Truss do the business and invoke A16, he will be gone.

“People need to know we have left the EU.”

Ms Truss will host European Commission vice president Maros Sefcovic for talks in London on Thursday, with the ongoing row over the implantation of the Northern Ireland Protocol in real danger of exploding further.

Last weekend, the UK’s Foreign Secretary warned she is prepared to trigger Article 16 if talks with the EU continue to collapse.

Writing in the Sunday Telegraph, Ms Truss said she will suggest “constructive proposals” to her EU counterpart Mr Sefcovic during Thursday’s talks, insisting it is her “absolute priority” to resolve the “unintended consequences” created by the protocol to maintain peace in Northern Ireland.

She warned: “I am prepared to work night and day to negotiate a solution.

“But let me be clear, I will not sign up to anything which sees the people of Northern Ireland unable to benefit from the same decisions on taxation and spending as the rest of the UK, or which still sees goods moving within our own country being subject to checks.

“My priority is to protect peace and stability in Northern Ireland.

“I want a negotiated solution but if we have to use legitimate provisions including Article 16, I am willing to do that.”