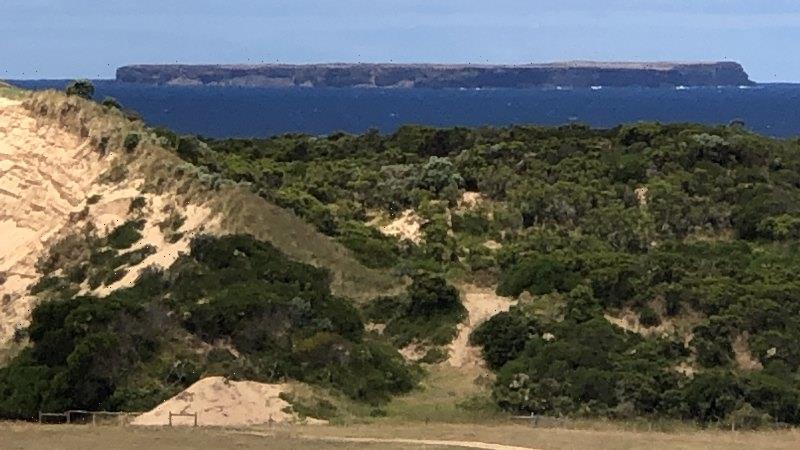 If you were to stand upon a dune above a rocky shore known as The Crags, between Port Fairy and the village of Yambuk in south-west Victoria, you’d look directly at a long flat island about 12 kilometres to the south-south-west. 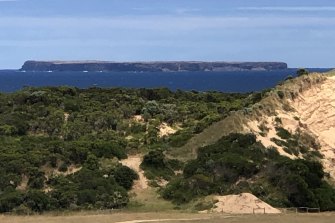 Deen Maar, off the south-west coast of Victoria.Credit:Tony Wright

It began its life around 8 million years ago as a volcanic eruption beneath the sea, exploding again about two million years later, by which time it had reared above the water.

It has since been worn down by fierce gales and wild seas until, from a distance, it looks like a tabletop resting on the horizon.

Perhaps four airmen lost in a storm hoped it was tabletop-smooth when they attempted a crash landing there during World War II. They died when their plane overshot and toppled into the wild ocean.

You may not have heard of this island, but that seems likely to change, largely because of those powerful winds that sweep the great empty bay in which it sits. 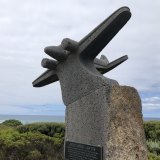 A memorial to the air crew that tried to land on Deen Maar in a storm in February 1944. Credit:Tony Wright

It appears destined to become a watery battleground between an unimaginably old culture and the modern search for renewable sources of energy – specifically, wind power.

A couple of weeks ago, the power company Alinta Energy floated the concept of building a giant wind farm in the sea to provide enough renewable energy to run the power-hungry Portland aluminium smelter nearby.

It was a mere idea, requiring much investigation and consultation and fancy-figuring to make it economically viable, considering early estimates of the cost are around $4 billion.

Still, in the search for renewable energy in a world threatened by climate change, it seemed potentially inspired: Portland’s Alcoa smelter devours 10 per cent of Victoria’s entire electricity supply, most of it from coal-fired generators.

Alinta issued a map of its “investigation area”. It showed a 500-square-kilometre area of sea that runs out to a loop around the island off the coast between Port Fairy and Portland.

And therein lies a problem born in an ancient past.

The island is sacred to the Gunditjmara and Eastern Maar peoples who live along that coast. Their elders believe any imposition of huge wind towers in the sea thereabouts would confront and overshadow the cultural meaning of their island.

“This is a proposal that we can never accept or approve,” says John Clarke, general manager of cultural landscapes for the Eastern Maar Aboriginal Corporation.

Damein Bell, CEO of the Gunditj Mirring Traditional Owners Aboriginal Corporation, is equally dismayed. He points out that in October, the federal government gave traditional owners just a month to submit proposals for the expansion of Sea Country Indigenous Protected Areas.

Both the Eastern Maar and Gunditj Mirring corporations submitted their wishes for their seas, including Deen Maar.

Suddenly, days after the proposals were lodged, came Alinta Energy’s idea of a forest of wind turbines sprouting from the sea.

But why is this obscure island, inhabited by Australia’s largest colony of fur seals and patrolled by great white sharks, so special?

The island has two names, one ancient, the other tacked on by British navigators intent on re-naming everything in sight.

It has been known as Lady Julia Percy Island since Lieutenant James Grant sailed by in 1800 and Matthew Flinders followed two years later. The name honours either the wife or a daughter of Hugh Percy, the 2nd Duke of Northumberland, a man said to be immensely generous with his wealth, which might have inspired the adventurous navigators to lavish the Percy name on the rock in the first place. 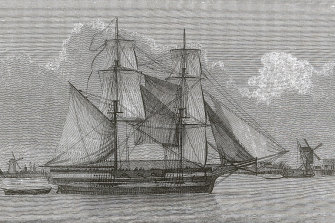 An engraving of Lieutenant James Grant’s ship, Lady Nelson, in the Thames. On it he would map parts of the southern coast of Victoria, giving Deen Maar the name Lady Julia Percy Island.

Deen Maar, however, is more satisfying. It has been the island’s name since before our knowledge of time began, with a meaning that hoists an otherwise obscure chunk of basalt into the realm of spirituality and mythic poetry.

It is the place where the Gunditjmara believe their spirits go when they die. Once there, they ascend from the island into the Beyond.

The importance of Deen Maar was explained way back in 1881 by James Dawson, pastoralist, guardian of Aboriginal people and author of Australian Aborigines: the Languages and Customs of Several Tribes of Aborigines in the Western District of Victoria, Australia.

“On the sea coast, opposite Deen Maar – now, unfortunately, called Julia Percy Island – there is a haunted cave called Tarn Wirring, ‘road of the spirits’, which, the natives say, forms a passage between the mainland and the island,” Dawson wrote.

“When anyone dies in the neighbourhood, the body is wrapped in grass and buried; and if, afterwards, grass is found at the mouth of the cave, it is proof that a good spirit, called Puit Puit Chepetch, has removed the body and everything belonging to it through the cave to the island, and has conveyed its spirit to the clouds.”

Myth, certainly – but in the 1960s the anthropologist and former curator of the National Museum of Victoria, Aldo Massola, declared he had found the Tarn Wirring cave near The Crags, right across from Deen Maar.

Alinta Energy, you’d think, might need a crash course in ancient culture before consigning billions of dollars to a wind farm in the sea near this sacred place.