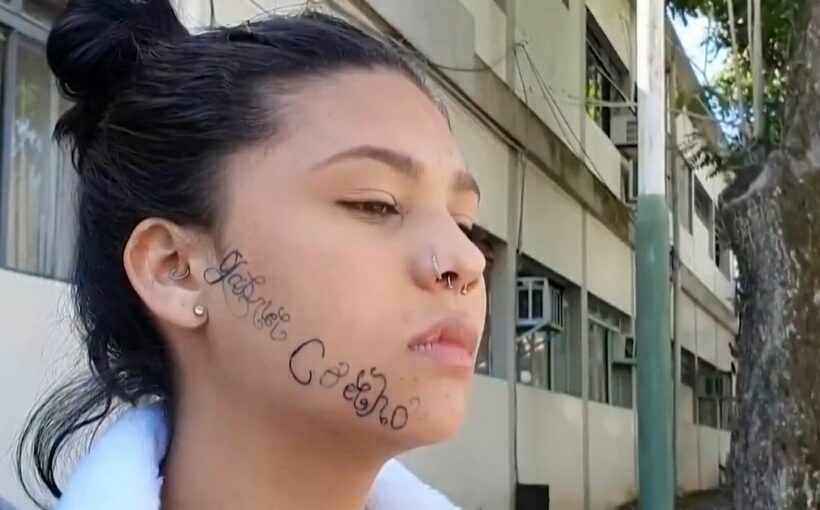 An abused teen who was kidnapped by her ex-boyfriend and branded with a face tattoo in a revenge attack has started laser treatment to get it removed.

Tayane Caldas, 18, was forced into her former partner's car and taken against her will while she was on her way to class in Taubate, south-eastern Brazil on May 20.

The thug, who has been identified as suspect Gabriel Henrique Alves Coelho, brutally beat her up before subjecting her to having her face inked with his name.

Her mum alerted the police after she returned home the following day, covered in bruises as part of a sick punishment for the break-up.

Alves Coelho, 20, was arrested for bodily harm and breaching his restraining order after he tattooed his name on her breast and bikini line in a previous incident.

After her story hit headlines, Tayane was flooded with support online and received several offers of assistance to remove her tattoo.

She has now expressed her "sense of relief" after undergoing her first tattoo removal session at a clinic in Taubate on May 25.

A few days later, Tayane's lawyer Cinthia Souza released footage of the session online as she hailed the teen for her bravery.

She wrote: "Tayane, you are free! God made you like this… Owner of you!

"We wish with all our hearts that you reframe your suffering and that this feeling is transformed into love.

"And may your story transform lives. Lives of women who go through the cycle of domestic violence but don't know how to recognise how harmful it is.

"You were created in the image and likeness of God and no one has the right to 'mark' your face and body without your free consent.

"Be happy, Tay. We will always be here watching closely and supporting you.

"May these first four laser tattoo removal sessions bring you the hope and fresh start you've dreamed of."

In her post, Souza tagged Brazilian YouTuber Peter Jordan, who heard about Tayane's plight and offered to pay for her treatment.

Tayane herself explained that the session was the first of several and that the ink does not come out "overnight".

She said: "It takes several sessions to reach the final result, and between each session, you have to wait a period of 30 to 40 days to do the next one. So it's going to be a very long process to remove everything."

Cinthia Diaz, the professional who is removing Tayane's tattoo, said: "It is a treatment, it will take a while. But just taking the first step is a relief for her. And the good thing is that we did it as soon as possible to not allow time for this pigment to settle in her skin."

Cinthia said she was expecting excellent results from the treatment.

The alleged attacker Alves Coelho is under police investigation.