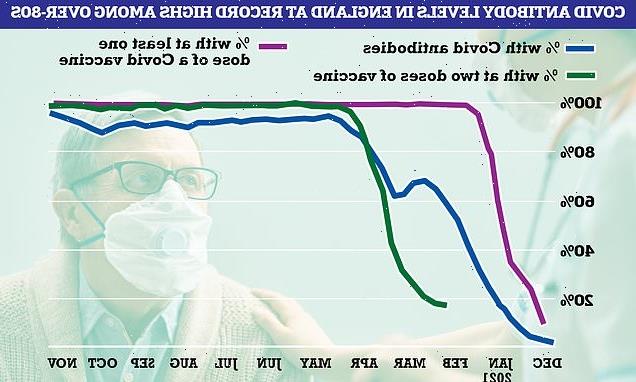 More over-80s have Covid antibodies than ever before just two months after the booster roll out began, official figures suggest.

The latest Office for National Statistics blood testing study estimated that 95.8 per cent of people over 80 in England were positive for the proteins by November 7.

This is the highest level ever recorded for the 2.8million-strong age group since samples started to be collected last December.

It is slightly higher than when second doses were rolled out to over-80s in May, when 94.4 per cent had antibodies.

The booster campaign was launched on September 16 and targeted elderly Britons first.

But 16 to 24-year-olds are currently thought to have the highest antibody levels, after 96.1 per cent tested positive in the latest week, due to high levels of infection in the age group.

Antibodies are gained either through natural infection or in response to vaccination and form one part of the immune response to Covid. They generally mean someone has at least some protection against the virus.

Over-80s were prioritised in the first roll out and for boosters because they are most at risk of being hospitalised or dying if they catch the virus.

Some 79 per cent have now got their booster after appointments were opened for bookings from six months following a second dose.

The ONS uses blood tests to randomly check 30,000 people for antibodies every week as part of the project.

Antibodies bind to the spike protein of the virus — which it uses to invade cells — preventing an infection.

They are present in the blood in high levels after infection or vaccination but fade over time.

T cells, which are harder to test for, are memory cells which store information on how to fight a virus long after antibody levels fade.

What are antibodies? How do they prevent infections?

Antibodies are proteins produced by the immune system to fight diseases.

They latch on to viruses and bacteria to stop them getting inside our cells. Antibodies stick to the spike protein on the surface of coronavirus.

This neutralises the virus as the spike protein is the ‘key’ that helps it unlock human cells.

How do they prevent future infections?

It takes two to three weeks after infection or vaccination for the body to make enough antibodies to fight the virus.

After recovering, a small number of antibodies which specifically target Covid continue to circulate in the blood.

This means if the body encounters Covid again the immune response is faster and antibodies can neutralise the virus before it infects cells.

Can you still get infected if you have antibodies?

Yes, there are still ‘breakthrough’ infections.

Some coronavirus variants, such as the Indian or Delta variant, appear to be better at dodging antibodies.

Antibody levels among over-80s have been rising week-on-week since the start of October when they hit a low of 87.9 per cent.

This comes about two weeks after the booster drive began, the time taken for a vaccine to take effect.

In Scotland, more over-80s are also estimated to have Covid antibodies than ever before.

Latest estimates showed 92.3 per cent now have them.

And in Northern Ireland among over-70s some 89.7 per cent were estimated to have Covid antibodies, compared to 84.7 per cent a month ago.

In England, over-80s and 75 to 79-year-olds have the second highest proportion of people with Covid-fighting antibodies at 95.8 per cent.

But 16 to 24-year-olds have the highest proportion at 96.1 per cent despite not being offered boosters.

Separate figures show, however, that the infection rate in this age group is several times higher than among older adults which could be driving higher immunity levels.

Britain has offered booster doses to over-50s since September, which they can get from six months after their second dose.

But after many elderly people complained they could not find out where to get the top-up jabs, bookings were opened from five months after the second dose.

Yesterday over-40s were also invited to book their extra jabs as the drive was expanded to younger age groups.

Ministers have hinted that everyone could be offered a booster dose eventually.

Britain is currently rolling out some 348,000 boosters a day, more than three times the rate when the drive began in September.

It has so far dished out some 15.3million top-up doses, putting its drive far ahead of its European neighbours.

The proportion of people inoculated with boosters in the UK (22 per cent) is almost twice as high as that in Austria (13 per cent), and three times the level in Germany (7 per cent).