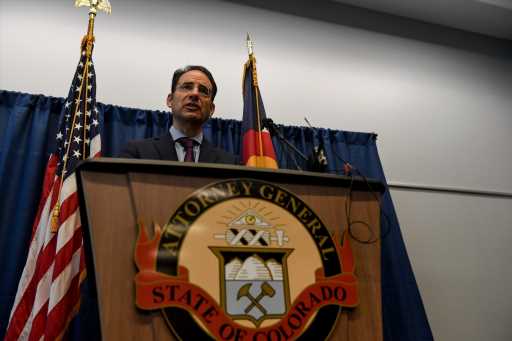 The Aurora Police Department will enact changes to use-of-force policies, hiring and training as part of a multi-year agreement with the state’s top law enforcement official, the Colorado attorney general announced Tuesday.

The Colorado Attorney General’s Office and the leaders of the Aurora police and fire departments agreed in what’s known as a consent decree to make changes to a wide breadth of policies and practices. The decree announced by Colorado Attorney General Phil Weiser on Tuesday — one of the first in the country enacted by a state official — followed an investigation by the attorney general’s office that found a pattern of racially biased policing and routine use of excessive force.

The city is required to hire an outside consent decree monitor to track progress on the requirements. The monitor will also engage the community around the changes and give final approval to any policy changes made by the agencies while the decree is in effect. The monitor will have full access to Aurora police and fire documents and will regularly report progress — or lack thereof — to the judge overseeing the decree.

The decree is expected to last approximately five years. Aurora leaders will have two years to change policies and procedures and will then undergo monitoring for an additional three years.

The consent decree is the first enacted after the passage by Colorado lawmakers of a 2020 police reform bill that gave the attorney general the authority to conduct pattern-and-practice investigations into how law enforcement agencies in the state conduct themselves. A handful of other state attorneys general have powers to implement a consent decree, Weiser said, though they are typically mandated by the U.S. Department of Justice.

The changes required by the decree in Aurora focus on use of force, police stops, the use of sedatives by paramedics, hiring and discipline.

The agreement requires the police department to track use-of-force incidents and conduct complaints more closely in order to detect patterns and make policy and training changes as needed. Aurora police will be required to develop and implement training that focuses on what officers should do instead of what they legally can do. Aurora police will also undergo training on combatting bias, avoiding escalation and keeping precise and accurate records on police interactions.

“The City shall create a culture of enforcement that prioritizes de-escalation when possible in accordance with Colorado law, but does not compromise officer safety when force must be used,” the decree states. “The City shall improve and develop accountability measures that consistently identify excessive uses of force, situations where force should not have been used even if it was legal, and recurring training and tactical issues related to use of force.”

The police department already contracted with the Boston-based Crime and Justice Institute for a review to improve their use of force policies, the decree states. The institute’s experts will look at policies related to deadly force, investigations of use of force and working with people with mental health needs.

The consent decree monitor will track the number and severity of use-of-force incidents as well as officer and community complaints to evaluate the success of the reforms.

The police department will also be required to create new policies on when officers can legally stop someone and provide practical guidance on exercising that discretion. Outside experts hired to investigate the death of Elijah McClain in the custody of Aurora police and paramedics found that the officers who stopped the 23-year-old as he walked home from a convenience stop had no basis to detain him.

The agreement forbids Aurora Fire Rescue from starting the use of ketamine without approval from the consent decree monitor. The fire department halted the use of the sedative in 2020 and department leaders have said they don’t plan to reinstate the use of the drug. Aurora Fire Rescue paramedics injected McClain with a too-large dose of the sedative while he was in custody. The paramedics who injected him were indicted on homicide and manslaughter charges in September — along with the police officers involved in McClain’s arrest — in connection to his death.

Aurora Fire Rescue must also create a process to review all drugs used to restrain people in the field and how those incidents are resolved. The monitor will then look over those reports for other potential issues.

The decree will require the city to re-work its hiring process for police and firefighters. The decree requires that the departments be more involved in the early stages of the hiring process and have the final say on which candidates are hired. The city’s Civil Service Commission currently handles all stages of hiring up until a candidate is assigned to the training academy.

Both Aurora Fire and the police department will be required to create a written recruitment plan that outlines how the agencies will recruit and hire a more diverse workforce. The city will also have to hire an outside expert on hiring a diverse public safety workforce.

The consent decree also requires the city to change its disciplinary process and “substantially reduce” the amount of time it takes for such cases to conclude. The Civil Service Commission, which hears appeals of disciplinary decisions, will also be required to make as many proceedings as possible easily accessible to the public.