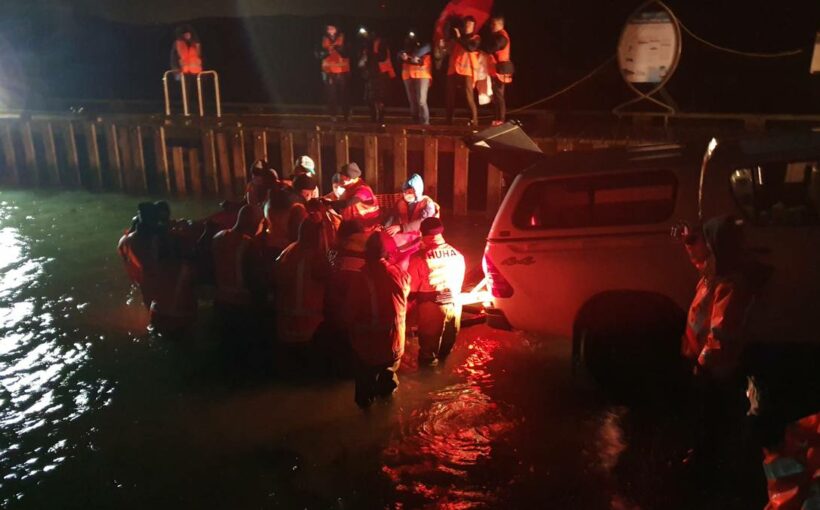 Orca calf Toa was moved back into a sea pen near the Plimmerton boat ramp overnight.

The move was planned after the Department of Conservation (DoC) determined it would be in the best interest for the orca’s health.

The juvenile orca aged between 2 and 6 months was found stranded on rocks at Plimmerton beach near Porirua on July 11.

Search efforts that have taken place over the past 12 days to find the calf’s pod have been so far unsuccessful, leaving him in the care of the Department of Conservation (DoC), Whale Rescue and volunteers.

“The calf has injuries to his pectoral fins and tail fluke and needs to stretch out in deeper water.

“It also has an issue with an inflamed eye which vets believe would respond better in salt water.”

He said the aim is still to reunite the calf with its pod.

Toa had been kept in a 32,000-litre temporary pool since last Thursday due to a storm that hit the Wellington region threatened to put volunteers and the animal at risk.

The aftermath of the weather caused contaminants to spill into the harbour forcing Greater Wellington Regional Council to issue a no swim notice.

The Plimmerton Boating Club site remains closed to the public to reduce stress for the orca calf.

Anyone who sights orca pods is urged to provide as much information as possible to DoC, via [email protected] or by calling 0800 DOC HOT.

Essential information includes location of the pod, direction of travel of the animals, and photographs or videos which clearly show the saddle/back markings of the animals and their dorsal fins.