Home » World News » BBC Weather: Flood warning for Europe as up 250mm of rain to cause disruption 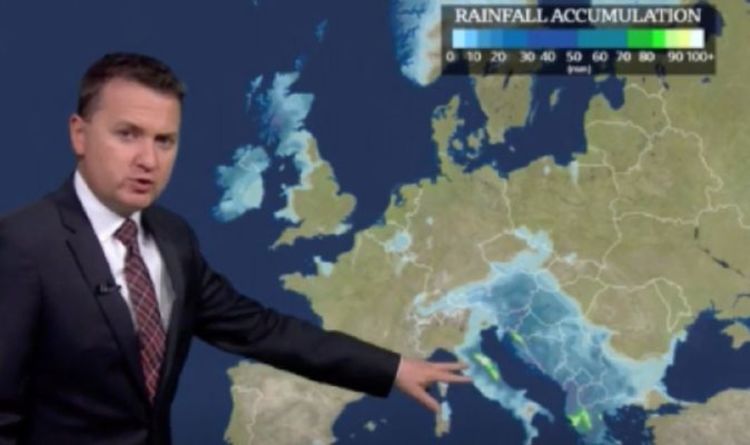 BBC Weather forecaster Matt Taylor warned of up to 250mm of rain for Italy on Friday. He noted that much of Italy and parts of the Balkans could see flooding due to the heavy rain. Elsewhere in Europe, it does remain dry with temperatures above average in some parts.

Mr Taylor said: “We started this week with flooding in parts of France and western Italy.

“At the moment we are looking towards the east of Italy, the Balkans and also Greece.

“This chart shows how rainfall totals mount up over the coming days.

“The brighter colours are in eastern Italy, parts of northern Greece into Albania.

The BBC Weather forecaster noted how in the south west part of Europe they will see the most rain on Friday.

Temperatures in the region are expected to still be warm however.

Mr Taylor continued: “There is an area of low pressure on Friday circulating to the south of Italy.

“There will be strong winds on the northern edge, buffering parts of northern Italy, Croatia and the northern Adriatic.

“But it is across Greece into the southern Balkans, the south and east of Italy where the rainfall just continues.

“This is the reason for the increased flood risk.”

In the west of Europe, the weather is considerably drier.

British campers are braving the wild weather – ‘We loved it!’ [INSIGHT]
UK set to bathe in sunshine as rain makes way for highs of up to 17C [ANALYSIS]
How to clean your home this autumn: Lynsey Crombie’s TOP tips [VIDEO]

The weather forecaster continued: “Much of western Europe will see unusual October warmth.

“Temperatures will be above average for the time of year, it feels quite pleasant out there.

“Into Saturday you can notice we still have that cloud and outbreaks of rain in the far southeast of Italy and in towards parts of Greece and the Balkans.

“Whereas in the north and west it is looking dry for many.

“Although though parts of the UK and Ireland will see rain make it way in.”