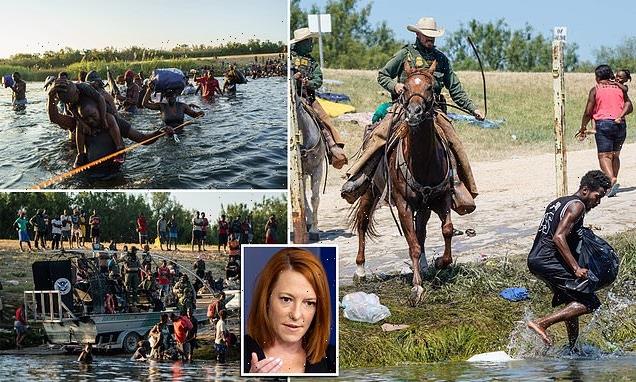 The White House is reacting to disturbing images that surfaced on Sunday of Border Patrol agents appearing to whip Haitian migrants desperately trying to cross the Rio Grande river into the United States.

‘I don’t know what the circumstances would be, it’s obviously horrific,’ Press Secretary Jen Psaki said of relevant footage from the border on Monday.

Psaki was asked about the images at her daily White House briefing.

‘I’ve seen some of the footage, I don’t have the full context, I can’t imagine what context would make that appropriate but I don’t have additional details,’ she said.

‘I don’t think anyone seeing that footage would think it was acceptable or appropriate.’

She added that it was ‘horrible to watch.’

A video obtained Sunday night shows Border Patrol officers on horseback, waiting on the US side of the Rio Grande as migrants – some of them families with young children – wade through chest-deep waters trying to cross.

Officers can be seen charging their horses toward migrants carrying food and supplies. Some of them are swinging what appears to be lariats. 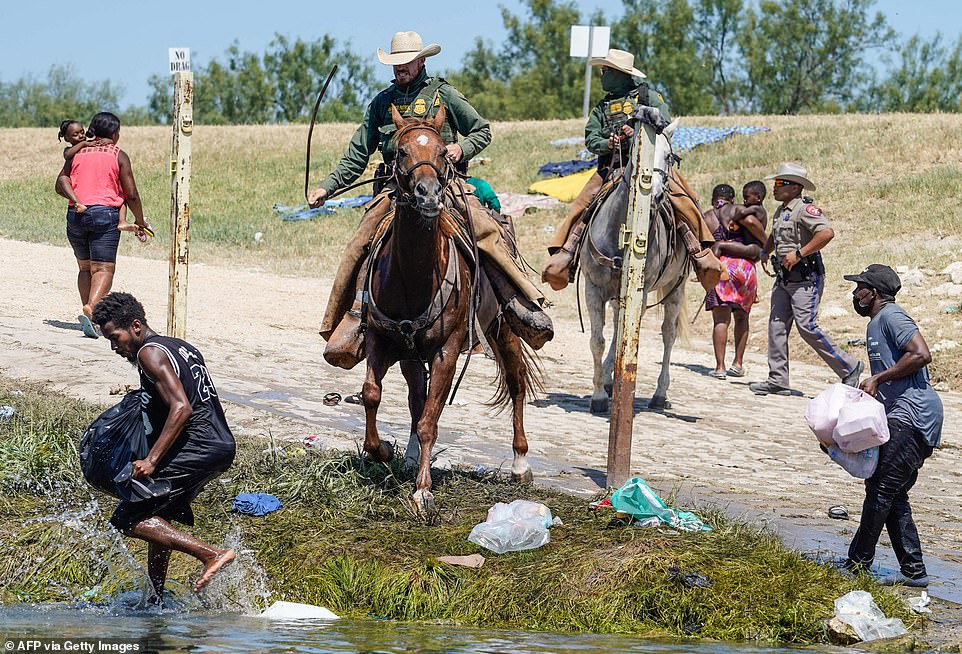 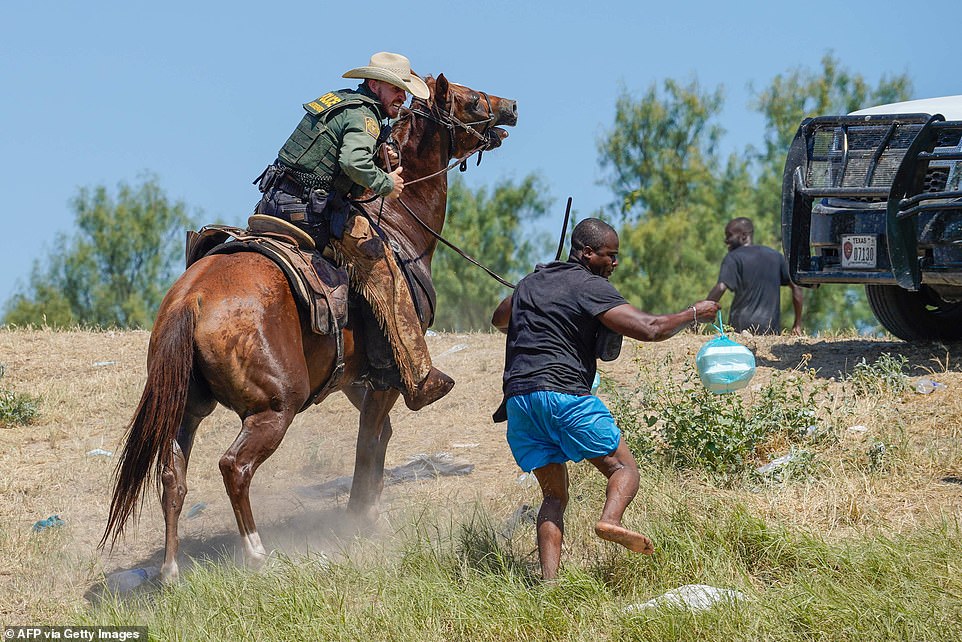 The devastating images were captures as migrants were trying to return to their encampment from Mexico, where they were buying much-needed supplies 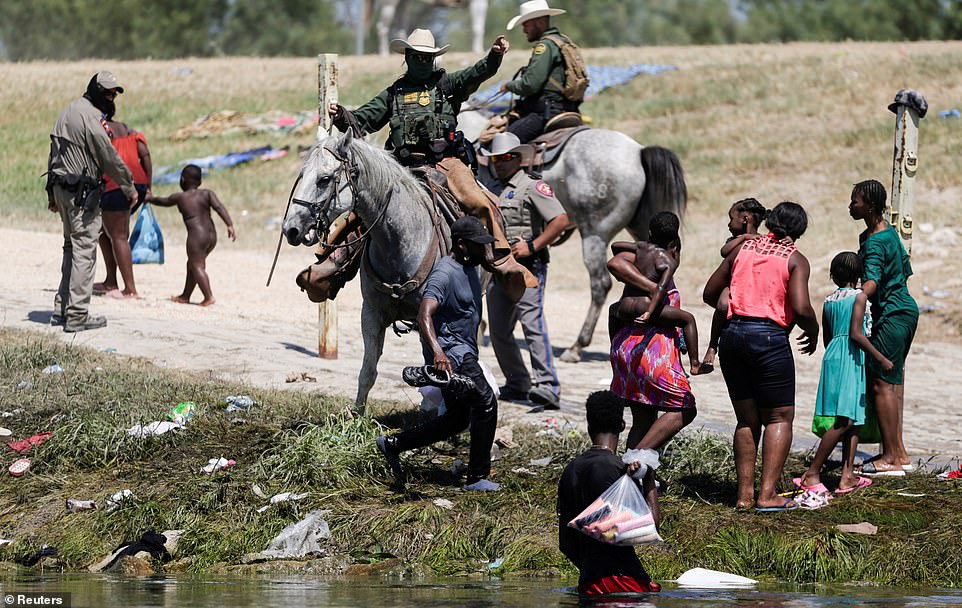 U.S. border patrol officers cut the way of migrants asylum seekers as they are trying to return to the United States 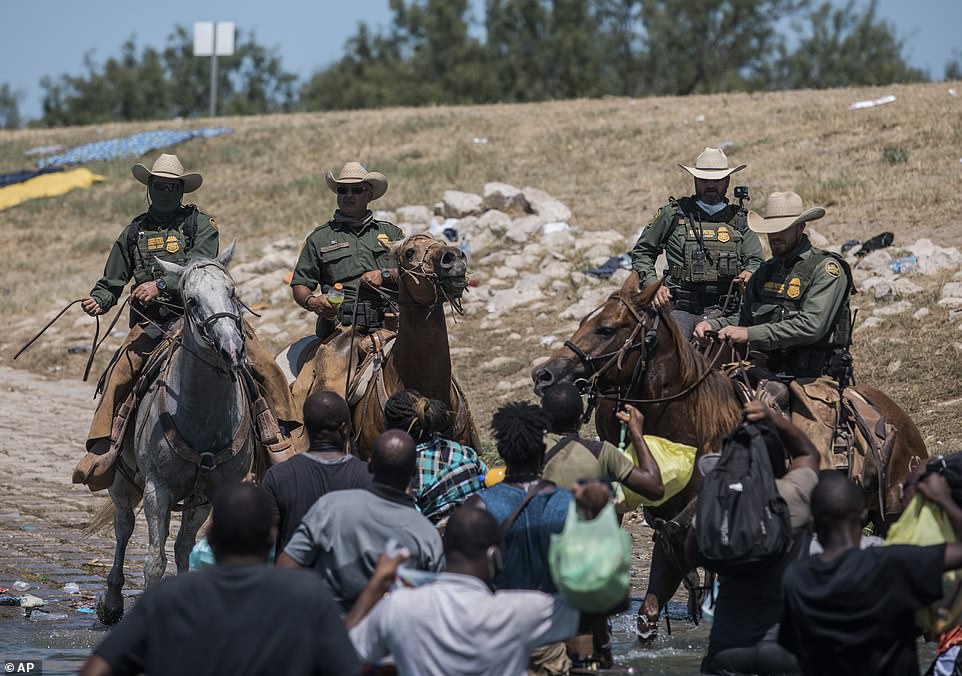 Other officials can be seen reaching down to violently grab migrants by the sleeve or collar.

At one point, a Border Patrol officer appears to hit a man, sending him falling back into the water.

Many of those migrants were reportedly already camped out in a makeshift tent city under a bridge in Del Rio, Texas. They had crossed back to Mexico to purchase water, food and diapers in Ciudad Acuña.

Psaki was asked on Monday if there would be consequences against the officers involved.

She didn’t say whether they’d lose their jobs but suggested ‘they should never be able to do it again.’

The Biden administration has been grappling with an influx of migrants since the Democrat took office in January. 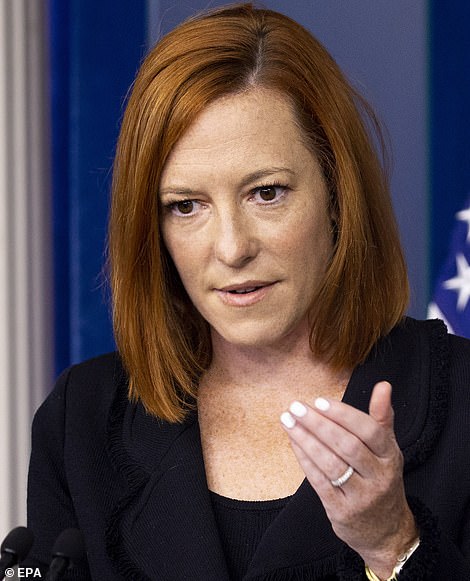 Migrants began flowing back into the Mexican side of the southern border on Monday from Del Rio, Texas as the Department of Homeland Security plans to ramp up deportation flights to seven per day.

Video emerged today of scores of mostly Haitian migrants making the trek back across the Rio Grande River to Mexico from the US after three flights full of migrants from the US landed in Port-au-Prince, Haiti on Sunday.

Up to 15,000 migrants set up camp under and around the Del Rio International Bridge, using a dam area to cross between the Mexico and US side of the border.

The massive encampment of migrants has brought up several issues, including health concerns in the midst of the coronavirus pandemic as DHS Secretary Alejandro Mayorkas revealed they are not vaccinating migrants.

Mayorkas said Sunday that he will visit the southern border, as President Joe Biden and Vice President Kamala Harris, who was put in charge of the border crisis, have remained silent on the recent developments of mass migration among Haitians.

‘I will be traveling to the border myself,’ Mayorkas told CNN, adding he speaks regularly with the White House and President Joe Biden about the issue. 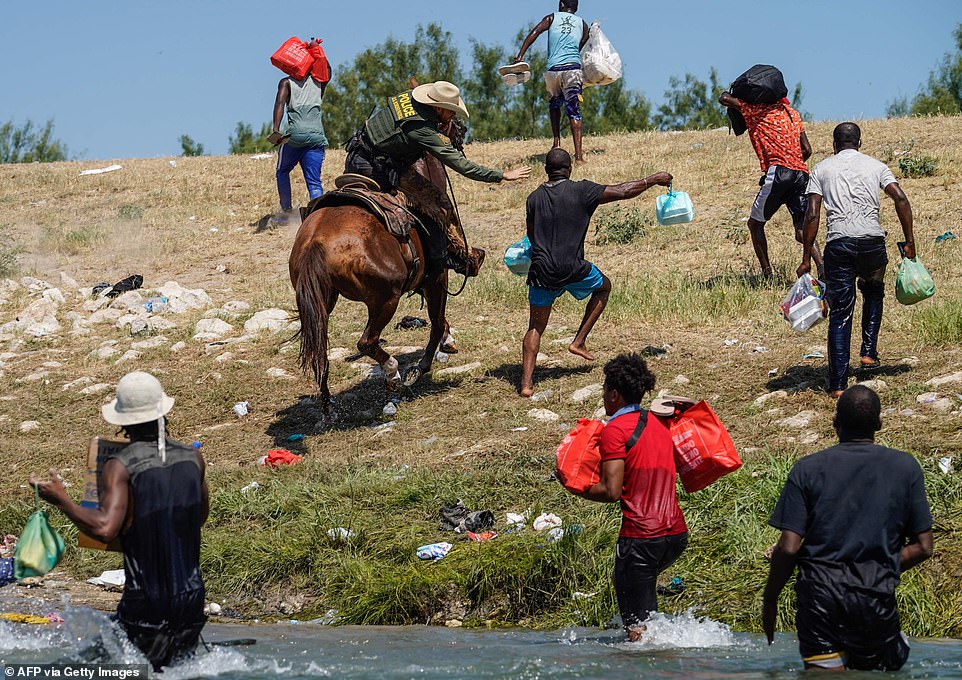 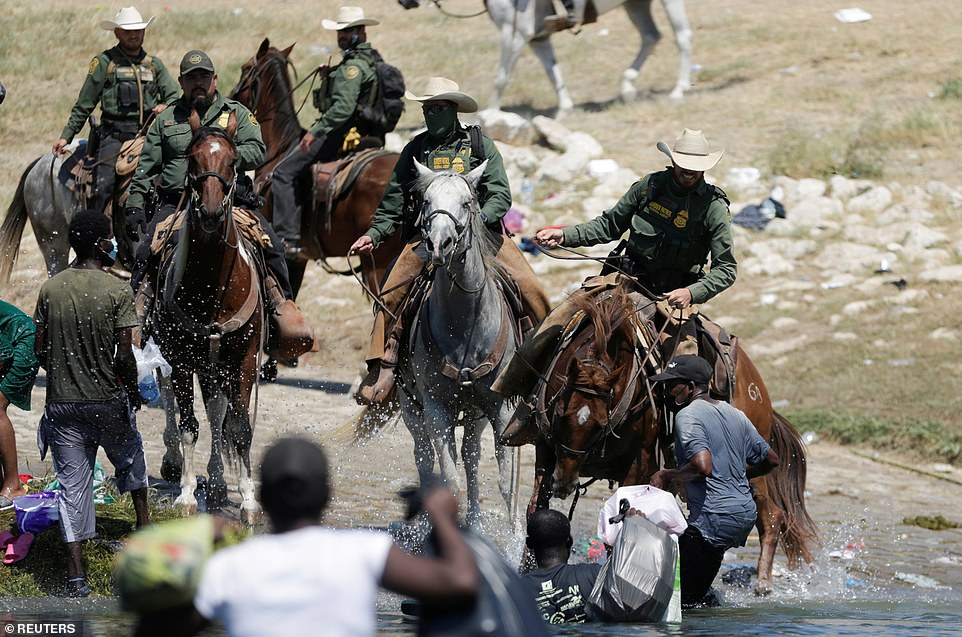 Many of those migrants were reportedly already camped out in a makeshift tent city under a bridge in Del Rio, Texas. They had crossed back to Mexico to purchase water, food and diapers in Ciudad Acuña 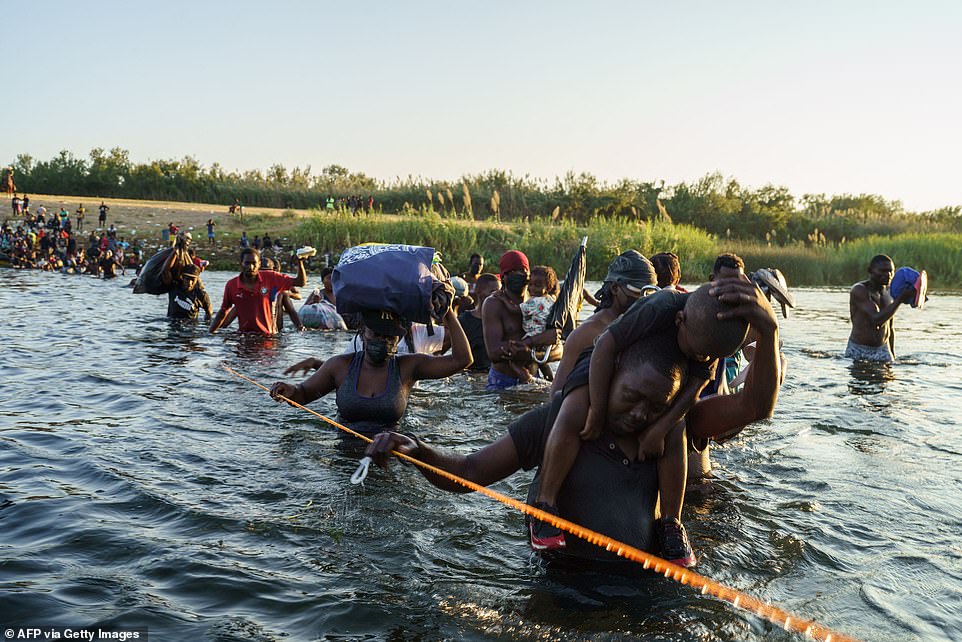 Haitian migrants are seen crossing the Rio Grande valley on Monday as thousands more are camped out under a bridge near Del Rio, Texas 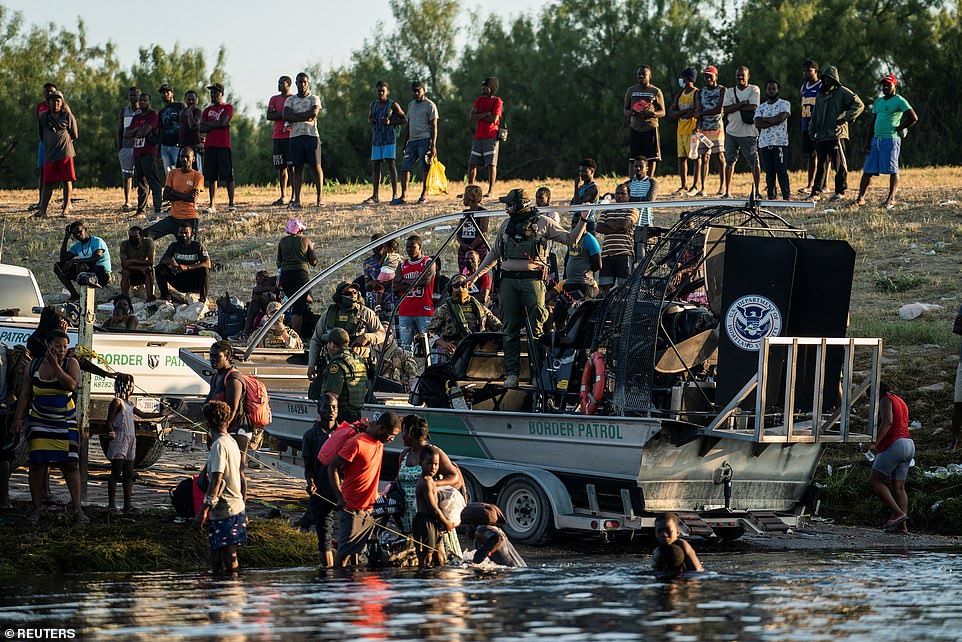 U.S. Border Patrol agents deploy a boat into the Rio Grande river on the U.S. side of the bank as migrants seeking asylum in the U.S. cross the river into Mexico 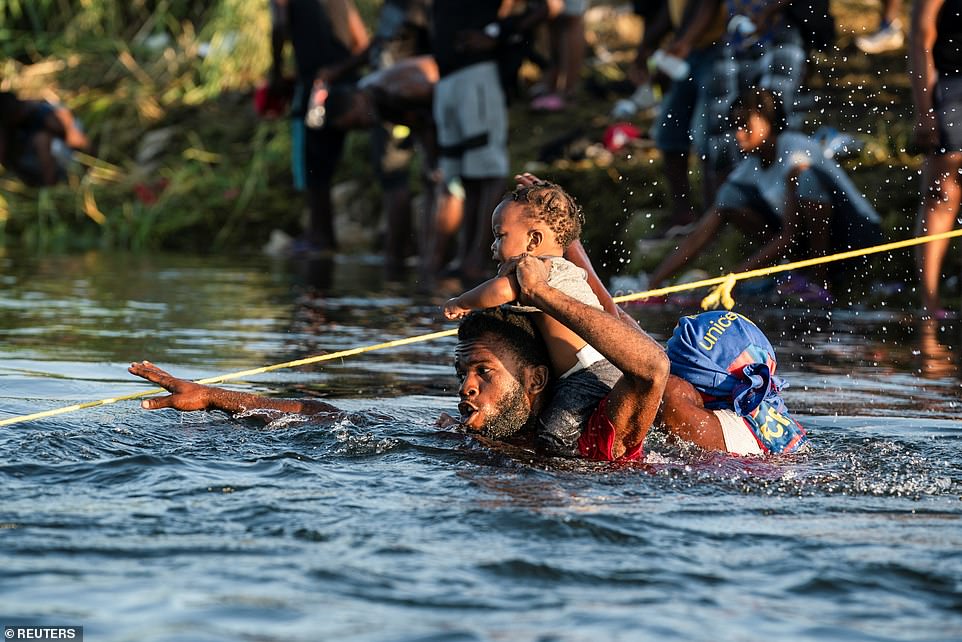 Migrants seeking asylum in the U.S. grab onto a rope to guide them through the current while crossing the Rio Grande river into Mexico near the International Bridge between Mexico and the U.S.

The Haitian migration crisis is exacerbated by those who left Haiti after the 2010 earthquake to settle in South and Central America who are now desperate to leave there due to the coronavirus pandemic and economic collapse.

At that time many flew to Ecuador where there’s no visa requirements – then proliferated to Brazil and Chile.

They are now leaving there and making their way up to Mexico anyway they can.

Images from Del Rio, Texas began emerging over the weekend where thousands of mostly Haitian migrants used a dam to cross between Mexico and the US On Sunday, three removal flights of migrants arrived back in Port-au-Prince, Haiti.

The developing crisis forced the Biden administration to close six crossing points along the border and send in at least 400 troops to help stop the flow and round up migrants for deportation.

Haitian migrants set up a massive makeshift camp under the Del Rio International Bridge in just the last weeks, with the number swelling from around 400 to 14,534 in just one week, according to Del Rio Mayor Bruno Lozano.

DHS revealed over the weekend that it would ramp up and accelerate its removal efforts of migrants as Biden continues to face widespread criticism for his handling of the humanitarian and national security crisis at the southern border. 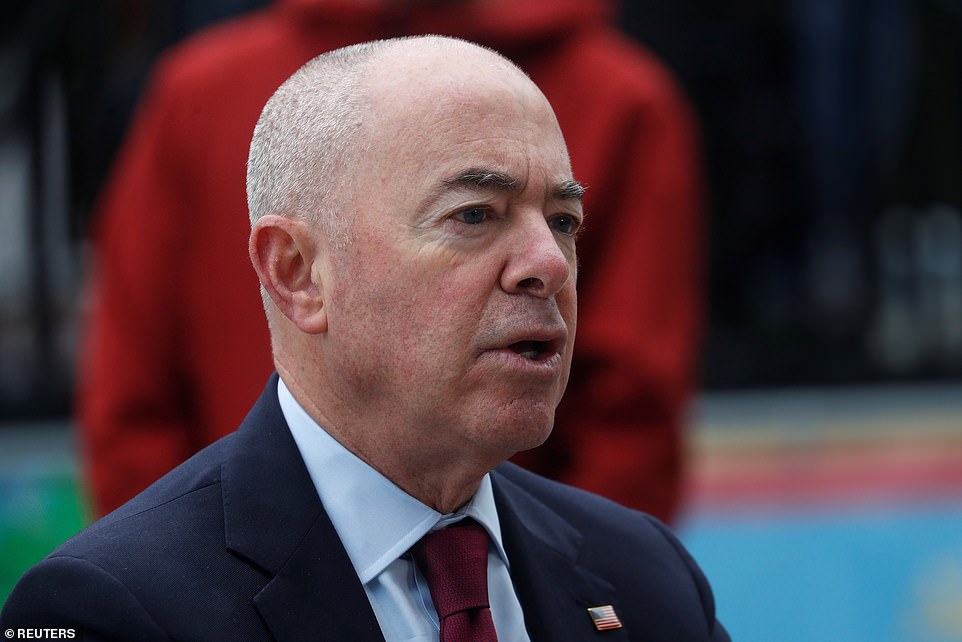 Biden and Harris have not visited the US side of the Rio Grande Valley – where the majority of the migration crisis has taken place.

Neither the president or vice president have addressed the latest developments or the new DHS strategy to deport these migrants.

On Monday Psaki was asked about a double standard in letting Afghan refugees resettle in the US but forcefully turning away Haitian refugees at a time when the country is dealing with the aftermath of an earthquake and a presidential assassination.

‘Our immigration policy is not about one country or discriminating against one country over another. We want to end that and we want to put an end to what we saw over the last four years,’ she said, referring to the Trump administration.

Psaki added that Haitians are encouraged to apply for temporary protected status to remain in the US.

She also said the federal government was working with Haiti’s government to help the country recover and accommodate the Haitians being sent back.