London: The exhaustion was etched on his face as he laid the crimson Queen’s Company Camp Colour on his beloved mother’s coffin.

After a remarkable week of sorrowful stoicism, it was the simple yet solemn act that signalled to those watching that this was finally the end. 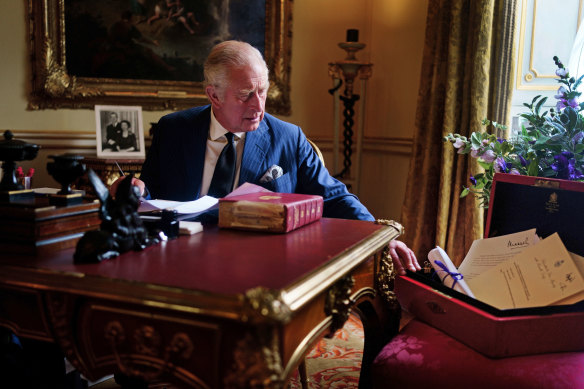 As the King this week retreated to Balmoral to privately mourn Queen Elizabeth II’s death after the very public spectacle of the previous 10 days, he could rest assured of a difficult job well done.

From his warmly received first walkabout as King outside Buckingham Palace, before he gave his heartfelt speech to the nation, to his tearful final farewell on Monday, the new monarch, 73, has conducted himself with dignified diligence.

With his visits to the four corners of the UK and multiple public meet and greets – not to mention hosting the biggest state reception in recent memory, the King has brought his subjects welcome reassurance that the show can and will go on.

Yet as he prepares to leave Birkhall, his Highlands retreat, once the official period of royal mourning ends tomorrow, Charles III will be under no illusion about his burgeoning in-tray. 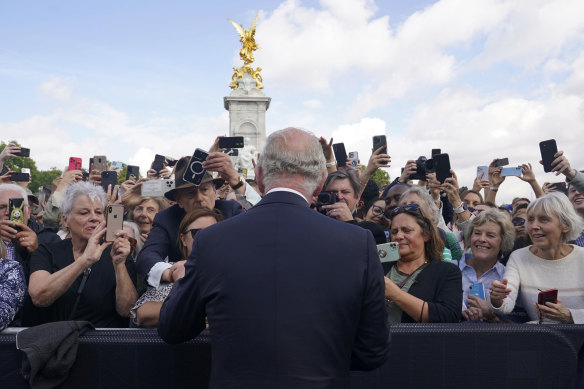 King Charles III greets well-wishers as he walks by the gates of Buckingham Palace following the death of Queen Elizabeth II, in London, on Friday, September 9, 2022.Credit:AP

First there is the matter of staffing. The King faces the difficult task of merging two households – his late mother’s and his own at Clarence House – into one.

Staff are already said to be “fuming” after his private secretary Sir Clive Alderton sent a letter to employees saying they may face redundancy.

The timing of the notice, which was sent just two days after Queen Elizabeth’s death on September 8, has been questioned although as Dickie Arbiter, her former spokesman, pointed out: “There is never a good time to tell staff they might lose their jobs.”

In his letter, Sir Clive pointed out that, “the portfolio of work previously undertaken in this household supporting the former Prince of Wales’s personal interests, former activities and household operations will no longer be carried out,” although added that certain staff providing “direct, close, personal support and advice” to Charles and Camilla would remain in post. 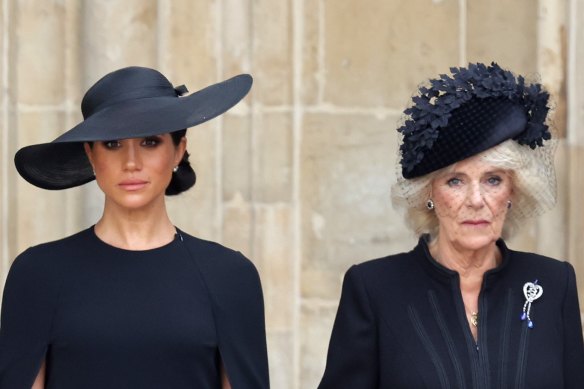 Meghan, Duchess of Sussex, and Camilla, Queen Consort, during the funeral.Credit:Getty Images

The trouble for the King, however, is that the one employee who provided the most direct, close personal support and advice is no longer with him at the time when he arguably needs him the most.

As Prince of Wales, Charles once lamented: “I can manage without just about anyone except for Michael”, referring to his former valet Michael Fawcett, who had worked with him since the late 1980s.

Yet last September he was forced to resign from his post as chief executive of the Prince’s Foundation amid an alleged cash-for-honours scandal.

The father -of-two, 59, was accused of offering to help secure a knighthood and British citizenship for a Saudi billionaire donor. 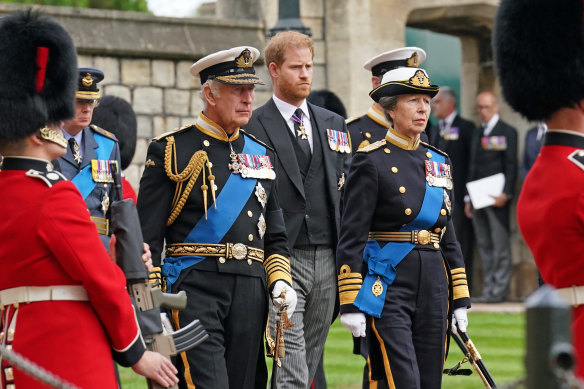 The forthcoming autobiography by Prince Harry will bring fresh challenges for the new king.Credit:Getty Images

At the time Douglas Connell, chair of the Prince’s Foundation, said: “Michael fully supports the ongoing investigation and has confirmed that he will assist the investigation in every way.”

While Fawcett’s departure may have helped to protect the King, who was said to have had “no knowledge of the alleged offer of honours or British citizenship on the basis of donation to his charities”, it has apparently left him “bereft”.

According to one source: “His loss is enormous. Michael was the King’s absolute closest confidant. He provided the boss with camaraderie and reassurance, which is exactly what he needs right now.”

Fawcett’s absence has also caused a rebalance of power behind palace walls.

It has been suggested that both Sir Clive and the Queen Consort rather resented the influence the indispensable aide had over the King.

As the source added: “Now he has gone, Clive and Camilla are in full control – although the reality is it’s the Queen Consort who is now calling the shots.

“The King used to think that Fawcett and Camilla were the only people who understood him and now Fawcett’s gone, she’s got the monopoly.

“To be fair to her, she is the King’s rock. She is a stabilising and reassuring presence. She makes him laugh and they have been through the mill together so they have got so much shared experience.

“He, in turn, completely adores her.”

Those viewing the Queen Consort as a sort of jovial “plus one” misunderstand her influence not only on the monarch but also his court.

It was Camilla, for instance, who insisted on the appointment of former newspaper executive Tobyn Andreae as the King’s new spokesman, a move that apparently even blindsided Sir Clive, who is not thought to have sat in on the interview.

The Queen Consort is thought to have closely consulted with her friend Geordie Greig, a former newspaper editor, who is believed to have personally recommended Andreae for the position. He will replace Simon Enright, 52, who joined Clarence House in May last year after serving as communications director for NHS England during the pandemic.

Although widely respected as a journalist – and described by those who know him as “straight-talking, terribly nice and incredibly well-connected” – some fear old Etonian Andreae lacks the public relations experience required at such a pivotal time. The appointment also raised eyebrows because Andreae used to work for the Mail on Sunday, which has been the subject of two recent legal actions brought by the Duke and Duchess of Sussex over its coverage of the couple.

However, he will no doubt be able to bring his wealth of news experience to the fore to manage the fallout from the publication of Prince Harry’s memoirs in the coming months.

Although the autobiography has been delayed until after Christmas, neither the palace powers-that-be nor the royals have been given prior approval – posing another potential headache for the King after being the subject of several negative claims in the couple’s Oprah Winfrey interview.

Speaking to the US chat show host in March last year, Harry said his father “stopped taking my calls” and cut him and Meghan off financially.

Sources close to the King have denied the claims, pointing out that he funded them throughout their time in the royal family, including helping to pay for the renovation of Frogmore Cottage, their Windsor home.

The last thing the King needs right now is to be the subject of yet more salvos from his son (and by proxy, his daughter-in-law, who suggested in a recent interview that Harry felt he has “lost his father” through the Megxit process.

It goes without saying that such stories, however historic, are deeply unhelpful to the King’s reign at a time when he is trying to emulate some of his late mother’s magnanimous magic.

With the country facing a cost of living crisis, and now the instability caused by the loss of a beloved monarch, it has never been more crucial for the King to channel Queen Elizabeth’s unparalleled ability to keep calm and carry on.