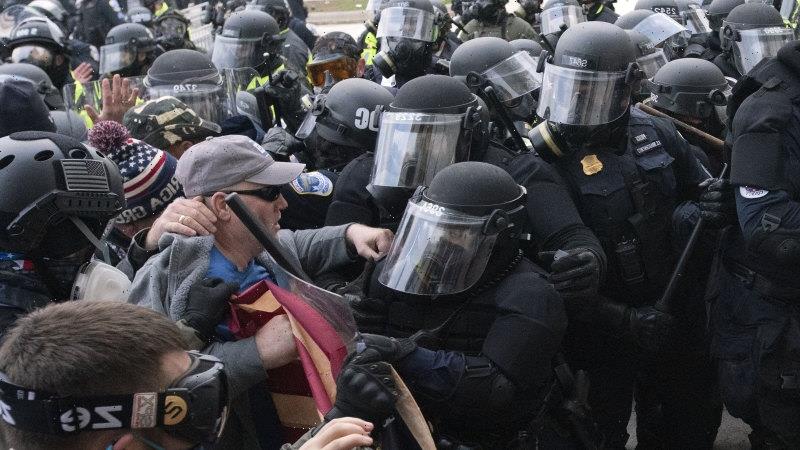 Washington: Seven US Capitol Police officers are suing former president Donald Trump and more than a dozen alleged participants in the January 6 riot at the US Capitol, saying the defendants are responsible for the officers being “violently assaulted, spat on, tear-gassed, bear-sprayed, subjected to racial slurs and epithets, and put in fear for their lives”.

The lawsuit, filed in US District Court in Washington, alleges that Trump, by falsely claiming the presidential election was rigged, incited a mob of his supporters to storm the Capitol in an effort to stop Congress from confirming President Joe Biden’s victory. 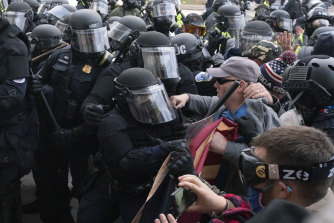 Capitol police officers in riot gear push back demonstrators who try to break a door of the US Capitol on January 6.Credit:AP

The complaint describes an array of abuse endured by the seven officers, who collectively “have dedicated more than 150 years” to protecting Congress “so that it can carry out its constitutional responsibilities safely and openly.”

While hundreds of demonstrators besieged the historic building, many of them armed with bludgeons, cans of noxious spray and other weapons, the lawsuit says, Trump “reportedly was watching live television coverage” and “refused to call off the attackers, whom he had personally directed to the Capitol just moments before.”

The complaint says Trump and other defendants, including the former president’s longtime friend Roger Stone, “encouraged and supported acts of violence, knowing full well that among his supporters were such groups and individuals as the Proud Boys, who had demonstrated their propensity to use violence” against Trump critics. 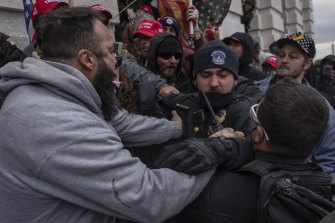 Demonstrators clash with a US Capitol police officer as they attempt to breach the Capital building on January 6.Credit:Bloomberg

Representatives for Trump did not respond to a request for comment, but his lawyers in similar lawsuits have argued he has absolute immunity from lawsuits over official actions taken while he was in office and his comments are shielded by the First Amendment. A spokesman for Trump has also said he did not plan or organise the January 6 rally on the Ellipse that preceded the riot or incite or conspire to incite violence at the Capitol.

In a statement via text, Stone called the lawsuit “baseless” and a textbook example of political harassment because it requires those sued to spend hundreds of thousands of dollars to defend themselves.

“The basic premise of today’s frivolous civil suit is deeply flawed. I never instructed anyone to hurt people at the Capitol, let alone a police officer, on January 6 or at any other time, nor did I conspire to deprive anyone of their civil rights,” Stone said. He again called “categorically false” any claim that he “had any involvement in, or knowledge of, the commission of any unlawful acts by any person or group” in Washington that day.

The case, filed on the officers’ behalf by the Lawyers’ Committee for Civil Rights Under Law, is similar to lawsuits filed separately against Trump this year by Congress members including Democrats Bennie Thompson and Eric Swalwell. Those civil actions also accuse Trump of being responsible for violence allegedly planned and carried out in large part by such far-right groups as the Proud Boys and the Oath Keepers. Thompson in July dropped out of his case against Trump because he was selected chairman of the Select Committee to Investigate the Capitol attack and wanted to avoid the “appearance of a conflict,” but 10 other legislatiors continue as co-plaintiffs.

The lawsuit does not seek a specific monetary award but asks for compensatory and punitive damages “in an amount to be determined by the jury at trust.”