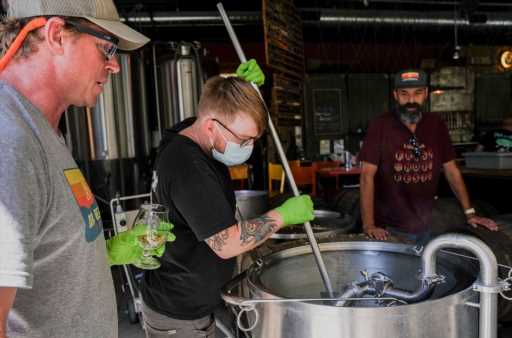 A little more than 10 years ago, when Charlie Berger and Patrick Crawford were still building out Denver Beer Co. on Platte Street in Denver, the two friends sat in front of the dusty construction site, offering baby hop plants to anyone who walked by.

“We’d tell them about hops and why we wanted them to grow them, that we were starting a brewery,” said Berger. “It was pretty guerilla marketing right then.”

A few months later, when the brewery finally opened, they invited those citizen farmers to bring in their crops of green, pine cone-like flowers — one of the four main ingredients in beer — then stick around to help brew a pale ale using the fresh hops.

As Denver Beer Co. has grown, the brewery has continued its “hop swap” and fresh hop beer tradition, sending out hundreds of tiny hop starters each spring to (hopefully) grow and flourish in Denver backyards. Since the pandemic forced them to put the annual program on hold last year, the brewers — and their volunteer crew of hop farmers — are extra jazzed about the 2021 Hop Swap Pale Ale, brewed in mid-September and on tap starting in early October.

“We get really excited as brewers when we get to dig our hands into the hop cones, lift them up to our noses and just smell what this next year’s worth of beer is going to be like,” Berger said. “We’re as passionate about the raw materials as we are about the beer itself. It’s definitely an exciting time of year.”

During harvest season in August and September, brewers have a once-a-year opportunity to make beer with fresh, rather than dried, hops. The resulting fresh hop, or wet hop, beers tend to taste fresher, brighter and have slightly more vegetal notes.

“Think of using fresh herbs versus dried — they’re extremely similar at their base, but you get a little extra pop out of the fresh,” said Dave Bergen, co-founder of Joyride Brewing Company in Edgewater, which is hosting a fresh hop beer festival featuring 14 Colorado craft breweries on Oct. 9.

Before you dive head-first into the toasty, spicy flavors of fall, give summer one last sip with these Colorado fresh hop beers.

Brewery owner John Hoxmeier took matters into his own hands to make this beer, harvesting fresh Chinook and Cascade hops from his own Fort Collins backyard. The resulting 7.3-percent beer has resinous pine, grapefruit and stonefruit notes.

Made with 650 pounds of fresh Strata hops that were picked at 3:30 a.m. in Oregon, flown straight to Colorado and thrown into Odell’s kettle 13 hours later, Odell’s Strata Fresh Hop IPA has notes of passionfruit, strawberry and fresh-cut grass.

Made with 100 pounds of five-hour-old, fresh Cascade hops from High Wire Hops in Paonia, then dry-hopped with Amarillo, Citra, Galaxy and whole-cone Cashmere hops, this beer packs a big punch. Expect fruit-forward, citrusy flavors like mandarin, pineapple and mango, plus notes of pine. Call to Arms also has another fresh hop beer right now: Fresh Hop Janet Reno’s Dance Party, which has notes of pineapple and fresh peach and a dank, fresh hop finish.

Named for the 12,000-plus-foot Lone Cone Peak in southwest Colorado, this hoppy, 6.2-percent brew features 100 pounds of fresh Chinook hops from High Wire Hops in Paonia. The brewers describe it as fruit-forward and juicy, with hints of melon rind, pine, white grape juice and just a kiss of caramel.

Edgewater’s Joyride Brewing made two versions of this wet hop IPA: one with fresh Comet hops from Billy Goat Hop Farm in Montrose, and another with fresh Cascade and Chinook hops from High Wire Hops in Paonia. Prepare your tongue for tangerine, lemon, grapefruit and pineapple flavors — with just a hint of gummy bear.

This is a wet hop spin on Cohesion’s standard světlé výčepní pivo (a Czech-inspired pale draft beer), made with Cascade hops from Billy Goat Hop Farm in Montrose. The hops, which Cohesion’s brewers used within 12 hours of harvest, add an extra dose of citrus and freshness to the typical honey and floral notes.

Head north to downtown Berthoud to get your hands on City Star’s Homegrown IPA, an American IPA made from Centennial hops grown right at the brewery. The brewing team picked the hops and added them to the beer in less than an hour (2 pounds of hops per barrel of beer!), which gives this one its super-fresh, hoppy punch.

The soft fruit and citrus notes from the fresh Chinook hops grown at Sweet Ridge Farm in Wheat Ridge pair perfectly with the toffee, caramel, dark chocolate and coffee notes from the four types of malted barley used to make this 6.1-percent black IPA.

Three Colorado breweries collaborated on this aptly named fresh hop hazy IPA. In late August, a contingent of brewers hopped into a single-engine airplane (built by FlyteCo’s Eric Serani and his dad), then took off for the Western Slope. They loaded the plane up with Chinook and Cascade hops from High Wire Hops in Paonia, then jetted off back to Denver to dump them into the brew kettle. This juicy, fruity, citrusy beer gives you a face full of fresh hop aroma, according to Serani.

Comrade makes this award-winning beer with 600 pounds of wet Chinook and Cascade hops from Billy Goat Hop Farm in Montrose and High Wire Hops in Paonia (the fresh hop version won back-to-back Great American Beer Fest silver medals in 2014 and 2015, and the regular version won gold in 2019 and silver in 2020). With a bright, light golden color, this IPA bursts with fresh hop flavors and modest, smooth bitterness. It smells like intense grapefruit, pine, berry and tropical fruit.

For the first time ever, WeldWerks is making a fresh hop version of its popular Juicy Bits New England-style IPA. It’s made with freshly picked Citra and Mosaic hops from Yakima, Washington, that were frozen within a few hours of harvest, then shipped to Greeley in a refrigerated truck.