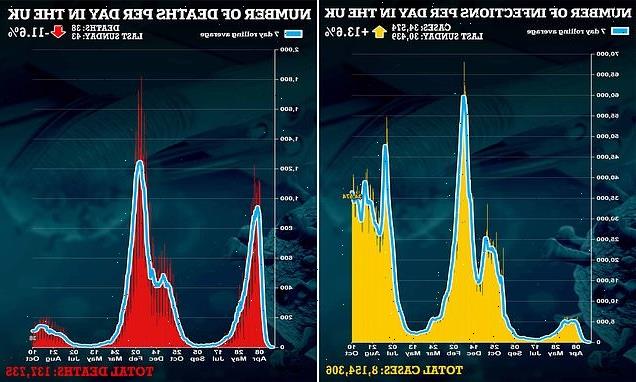 Britain’s Covid outbreak grew again today, with daily cases rising by 13.6 per cent while deaths tumbled from 43 to 38 on last week as officials refused to rule out reimposing another lockdown this winter.

Department of Health bosses posted 34,574 cases today, up from 30,439 last Sunday – meaning that infection rates have risen week-on-week for the fifth day in a row as vaccines appear to blunt the death rate but do not significantly reduce transmission.

Yesterday there were 34,950 cases, up 15.3 per cent on last Saturday’s figure of 30,301. The number of victims losing their lives to the virus also increased, with 133 people dying within 28 days of a positive test. The figure was up 9.9 per cent on last week.

It comes as one of the UK’s leading health bosses today refused to rule out imposing another winter lockdown amid the spread of both coronavirus and flu this season, and urged all those eligible for vaccination to take up the offer to protect themselves.

She said it is difficult to predict what will come with Covid-19 as immunity from vaccines wanes in some older people, but struck an optimistic tone by adding that she believes a winter lockdown is ‘highly unlikely’. 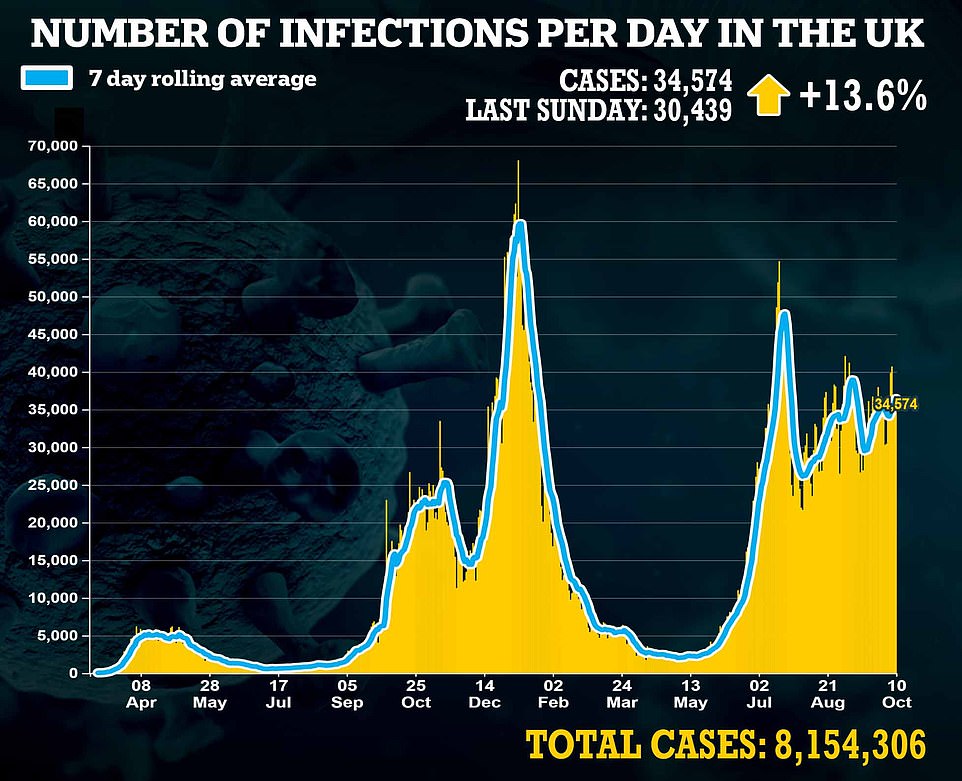 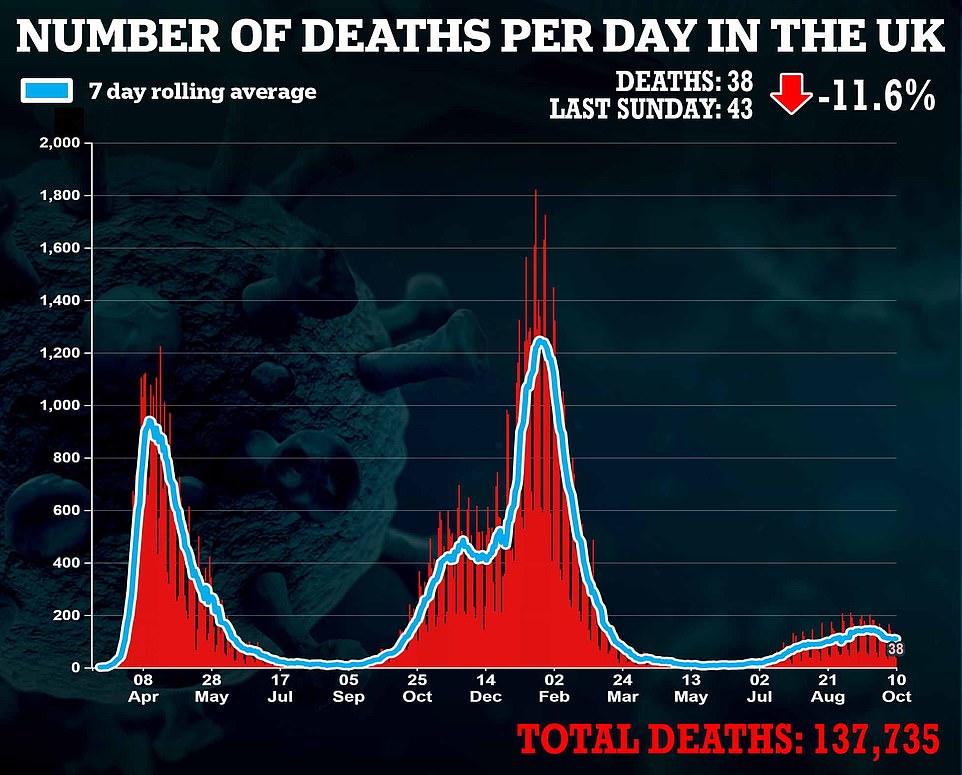 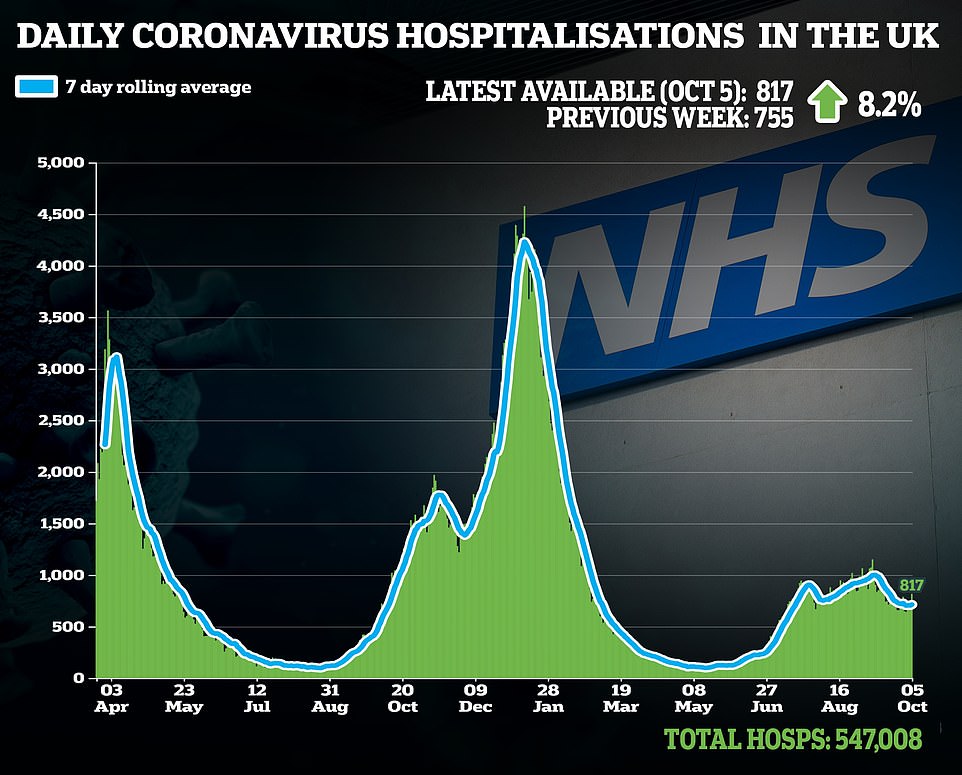 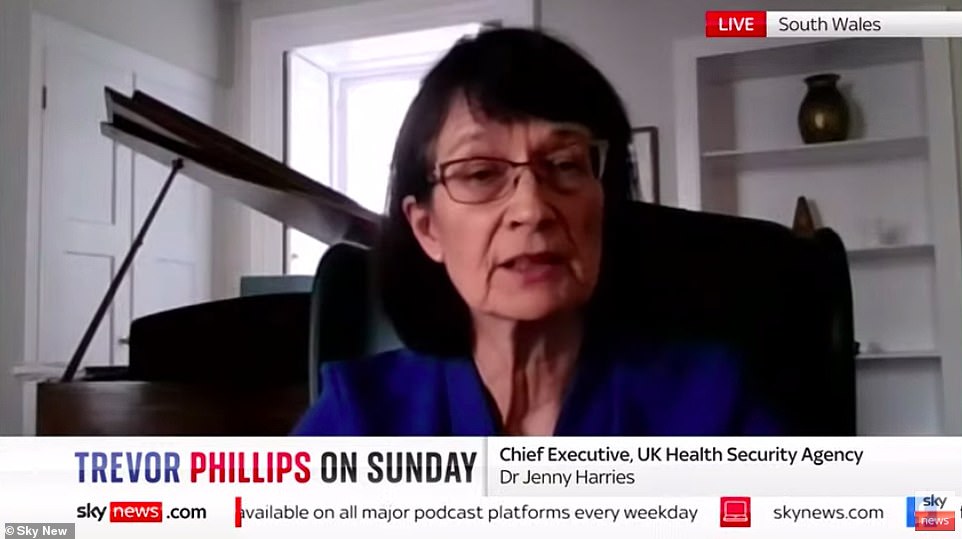 Dr Jenny Harries, the head of the UK Health Security Agency, said the UK is facing an ‘uncertain winter’ because of the potential for people to catch both diseases

Government ministers are said to be considering scrapping the expensive and controversial hotel quarantine programme.

The news comes amid the travel list of ‘red’ nations being slashed to just seven this week and dwindling numbers of those in mandatory self-isolation testing positive for Covid-19.

Double-vaccinated people arriving in England from 47 new countries, including South Africa, Mexico and Thailand, will no longer be required to spend 11 nights in quarantine at a cost of £2,285 per traveller from Monday.

Close to 200,000 people returning from red-list countries have endured mandatory hotel quarantine restrictions since the policy was introduced earlier this year.

But Government data shows the percentage of hotel quarantine travellers testing positive for Covid-19 dipped below the same figure for England’s population for the first time in August, the Telegraph reports.

The number of travellers arriving in the UK testing positive for the virus has remained below that of the general public for more than a month now.

Asked how worried the public should be about flu this winter, she told Sky’s Trevor Phillips On Sunday: ‘We should be worried about flu each winter. I think people still don’t realise it can be a fatal disease.

‘Recent studies suggest that about 25 per cent of us don’t actually understand that. On average, over the last five years, about 11,000 people have died with flu-related conditions.’

This year will be the first time flu ‘in any real numbers’ and Covid will be around at the same time, she said.

She added: ‘So the risks of catching both together still remain. And if you do that, then early evidence suggests that you are twice as likely to die from having two together, than just having Covid alone.

‘So I think it’s an uncertain winter ahead – that’s not a prediction, it’s an uncertain feature – but we do know that flu cases have been lower in the previous year so immunity and the strain types are a little more uncertain.’

A study by Public Health England showed that during the first peak of the pandemic, people who were infected with both coronavirus and flu had a significantly higher risk of death.

The research, published in September last year, saw data analysed in almost 20,000 people who were tested for both viruses between January 20 and April 25 2020.

Fifty-eight were identified as having ‘co-infection’ of the two viruses and overall, 43 per cent of people with co-infection died compared to 27 per cent of those who tested positive for Covid-19 alone.

Explaining that this year’s flu could be made up of different strains, Dr Harries said the vaccine being offered this winter season is to protect against four of those.

She said: ‘We’ve got a pretty good array in our toolbox to try and hit whichever one becomes dominant but it could be more than one this year, and people’s immunity will be lower.

‘So I think the real trick here is to get vaccinated – in both Covid and flu – but obviously to continue to do those good hygiene behaviours that we’ve been practising all through Covid.’

The average flu season sees around 11,000 deaths a year in England.

Dr Harries insisted it is not the case that 120 deaths a day is seen as an ‘acceptable death rate’ for Covid, and said officials are still ‘taking it extremely seriously’.

She told The Andrew Marr show: ‘We are starting to move to a situation where, perhaps Covid is not the most significant element and many of those individuals affected will of course have other comorbidities which will make them vulnerable to serious illness for other reasons as well.’

Natural Covid infection produces a stronger secondary immune response than the vaccine, a study has claimed.

Important components of the body’s immune response called memory B cells continue to evolve and get stronger for at least several months, producing highly potent antibodies that can neutralise new variants of the virus.

By comparison, vaccine-induced memory B cells are less robust, evolving for only a few weeks and never ‘learning’ to protect against variants.

Covid vaccines do induce more antibodies than the immune system does after a coronavirus infection.

But the immune system response to infection appears to outshine its response to vaccines when it comes to memory B cells.

Regardless of whether antibodies are induced by infection or vaccine, their levels drop within six months in many people.

But memory B cells stand ready to produce new antibodies if the body encounters the virus.

She said the ‘extremely good vaccine uptake’ is now preventing ‘very significant amounts of hospitalisation and death’, but added that this is now ‘one of the most difficult times to predict what will come’ with coronavirus.

She said: ‘We have different levels of vaccination, we have a little bit of immunity waning in older individuals, which is why we’re now starting to put in a Covid booster vaccine.

‘We have slightly different effectiveness in different vaccinations that have been provided.’

On a positive note, she said it appears the global dominance of the Delta variant has seen other coronavirus variants ‘become extinct’, but she added that we still need to ‘stay alert’ because it is ‘still very early days of a new virus’.

On schools, Dr Harries said a surge in cases had been expected, and that the important thing is good testing to ensure children are not in class while infectious. She said pupils wearing masks would not be at the top of her list of Covid-safe measures.

Her comments come after education unions urged the Government to consider reintroducing extra safety measures against coronavirus in schools.

A Department for Education spokesperson said the protective measures in schools ‘strike a balance between managing transmission risk’ and reducing disruption to education.

It comes as Lib Dem leader Sir Ed Davey said his party is the only party in the UK to stand in ‘clear and principled’ opposition to ‘unworkable, expensive’ Covid vaccine certificates.

It comes after First Minister Nicola Sturgeon had to apologise for problems with the app for the coronavirus vaccine certification scheme which was launched in Scotland at the start of October.

The new measure requires people going to nightclubs, concerts, some football matches and other large events to prove they have received two doses of coronavirus vaccine.

Wales is also bringing in a similar scheme, due to launch on Monday October 11.

The Lib Dem leader insisted such schemes were ‘not a real solution’ and would ‘place an unfair extra burden on local businesses who’ve been through so much already’.

Cases in Bath and North East Somerset per 100,000 population over a seven-day period 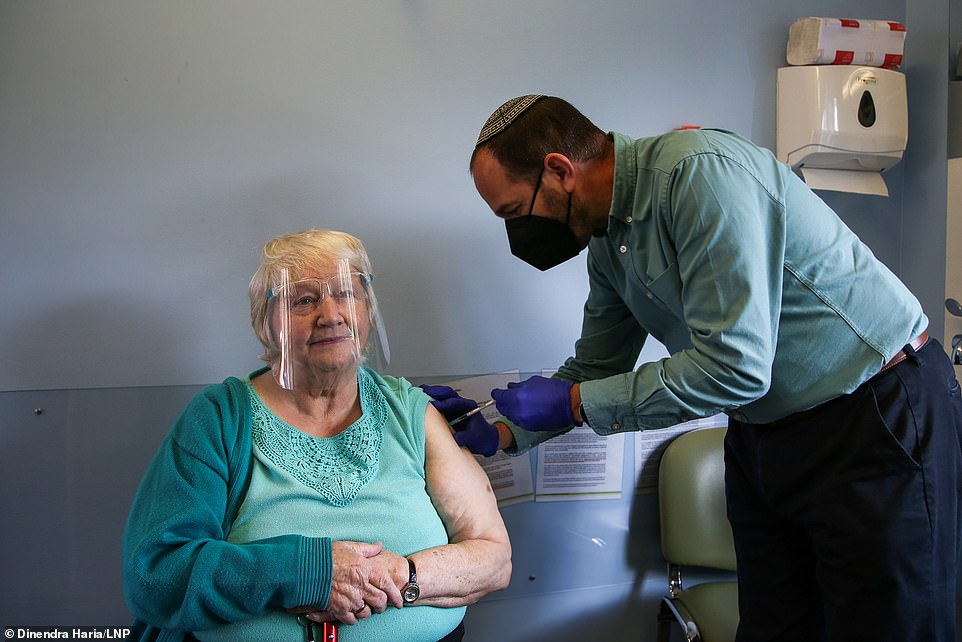 Ms Harries said the ‘real trick here is to get vaccinated’ as he urged people who are eligible to get both the Covid and flu jabs. A vaccination centre in north London is pictured on October 3

Delta Covid variant does NOT cause more severe disease in children than earlier strains, study finds

The Delta variant does not appear to cause more severe disease in children than earlier forms of the virus.

Earlier this year, the research team found the Alpha variant of the virus did not appear to make children sicker than the original form of the virus, first seen in China.

New data suggests that youngsters also do not get any sicker from Delta than they did from Alpha.

The study published in medRxiv ahead of peer review showed children infected with Delta had slightly more symptoms.

But in both groups, very few children needed to be hospitalised and long periods of illness were uncommon.

In both groups, half of the children were sick for no more than five days.

And he contrasted this approach with those of the other parties, saying the Conservatives were ‘pressing ahead’ with plans for vaccine passports in England while at the same time opposing them in Scotland and Wales.

Meanwhile he said: ‘Labour aren’t sure where they stand in England, but they oppose them in Scotland, and are bringing them in in Wales, and they even required Covid ID cards for their own party conference in Brighton.’

The Scottish Greens had ‘seemed to oppose them’ until a co-operation agreement with the SNP took them into government at Holyrood, and then ‘the Greens voted for them’.

Sir Ed insisted: ‘It’s only been us – the Liberal Democrats – with clear principles across the United Kingdom, taking a clear and principled position that unites our party across England, Scotland and Wales.’

The Liberal Democrat leader also used his speech to hit out at Boris Johnson’s ‘cruel’ Conservatives after the UK Government reduced Universal Credit payments by £20 a week, despite criticism from the other parties and anti-poverty campaigners.

He accused the Tories of ‘slashing the incomes of millions of hard-pressed working families by £1,000 a year with their cut to Universal Credit’ at the same time when food bills and heating bills are rising.

‘And the contrast between their policies, their conference and ours, between our party that truly cares about people’s lives, and this Prime Minister who clearly doesn’t… the contrast could not be starker.’

This, Sir Ed added, was a ‘reminder of why we have to win more votes and more seats at the next general election, and get Boris Johnson out of Downing Street and his Conservatives out of Government’.

He also attacked the Labour administration in Wales and the SNP government in Scotland, saying both of them had ‘mismanaged the NHS so badly that they’ve had to call in the army to drive ambulances’.

Sir Ed insisted: ‘Our country needs us too, because we need the Liberal Democrats to stand up and protect our precious union, our family of nations.

‘Our liberal values – of community and internationalism, of openness and tolerance – they are the antidote to the nationalists in Scotland, Wales and England who divide people and who threaten to tear our union apart.’