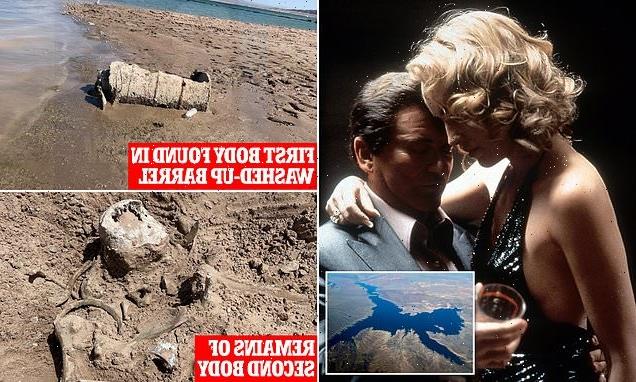 Is this Mob victims’ watery grave? Lake Mead has retreated due to drought, exposing decades of hidden secrets… and several bodies feared to be linked to Mafia hits, including suspected victim of gangster who inspired Joe Pesci’s terrifying turn in Casino

The first body was discovered in May. The skeletal remains of a man were found crammed inside a rusting metal barrel on Lake Mead’s muddy shore. Police said he had been shot in the head, Mob-style, sometime in the 1970s or 1980s.

Since then, the corpses have kept coming out of America’s biggest reservoir, which is giving up its decades-old secrets.

Recently, a new set of human remains proved the fourth such find.

The waters of the 112-mile-long lake on the Nevada-Arizona border are retreating in the wake of a drought, exacerbated by heavy water use by surrounding states.

Treasure hunters have flocked to the area, drawn by reports of what may be revealed: including several ghost towns, an ancient Native American ‘lost city’, a crashed World War II B-29 Superfortress bomber and the buried loot of a notorious gangster.

The lake is notable for being just 20 miles from Las Vegas at its nearest point. So perhaps unsurprisingly, while other drying reservoirs in America’s parched Southwest have revealed wonders such as a fossilised mastodon skull and ancient Native American dwellings, the one closest to Sin City is throwing up more gruesome surprises. 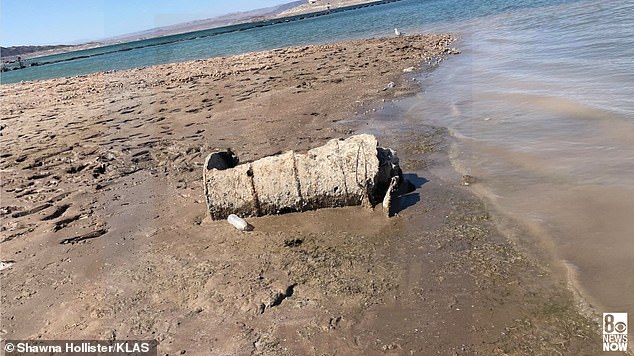 The waters of Lake Mead, on the Nevada-Arizona border, are retreating in the wake of a drought. In May the skeletal remains of a man were found crammed inside a rusting metal barrel on the shore

In its early years, the casino town was so tightly controlled by the Chicago Mafia — the so-called Outfit — and other clans in the Midwest that it was said every other person there claimed to be connected to the Mob. And with so much money to be made by the unscrupulous — not to mention so much potential for them to rip each other off — there were inevitably a lot of casualties.

Although Lake Mead had obvious attractions as a place to dispose of those fatalities, local Mafia experts have long argued that mobsters preferred to bury bodies in the Nevada desert, as they feared that floating corpses in the reservoir would alarm tourists and discourage them from visiting Vegas.

The latest discoveries, particularly the unfortunate man in the barrel, suggest that assessment may have been wide of the mark.

‘This is just the tip of the iceberg,’ said Travis Heggie, a former National Park Service official who has studied deaths at Lake Mead Recreation Area. ‘I’m expecting all sorts of criminal things to show up — and I mean a lot.’

Even if it isn’t more bodies in barrels, he expects they will find an arsenal of guns and knives — and whatever else the mobsters used to kill each other and needed to dump afterwards.

The 86-year-old reservoir is formed by the Hoover Dam on the Colorado River and provides drinking water to California, Arizona, Nevada and parts of Mexico. It is currently filled to less than 30 per cent of its capacity. 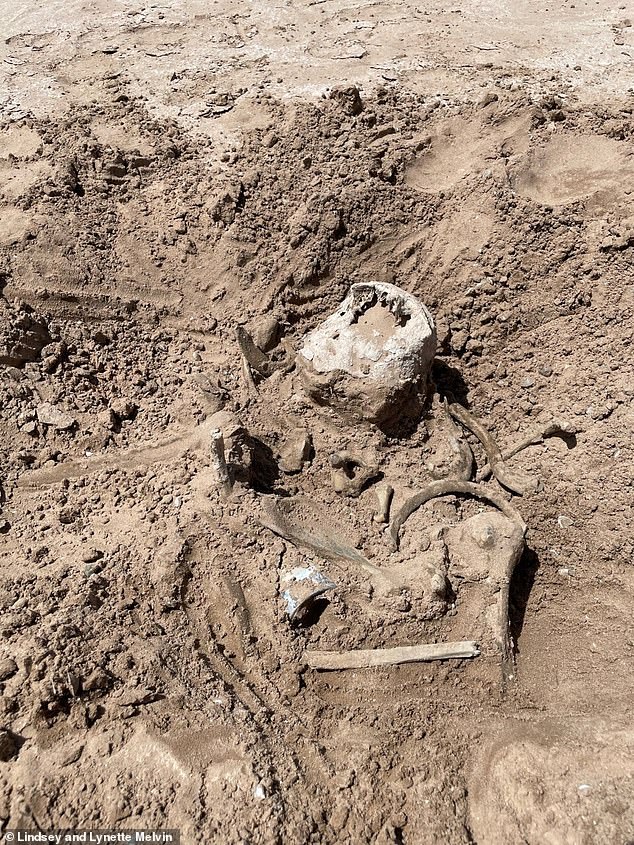 Although Lake Mead had obvious attractions as a place to dispose of those fatalities, local Mafia experts have long argued that mobsters preferred to bury bodies in the Nevada desert (pictured: another body found at Lake Mead)

Although the lake occupies a U.S. national park (so everything found there technically belongs to the federal government), two former police officers have offered a $5,000 reward to anyone who discovers more sunken barrels.

Some of them, it is believed, may contain the missing loot of Bugsy Siegel, who made a fortune as one of Sin City’s early criminal overlords. It’s rumoured he hid his takings in several barrels that were sent to the bottom of Lake Mead shortly before he was murdered in 1947.

But given that stashing victims in barrels has been a popular technique among criminals since the mid-19th century, they may find a few more skeletons before they find Bugsy’s treasure.

After the body in the barrel was found near an area known as Swim Beach on May 1, the shoes of the victim allowed authorities to approximately date the death. A week later, two sisters out paddleboarding found the half-buried remains of someone aged between 23 and 37.

They initially thought it was sheep bones. ‘It wasn’t until I saw the jawbone with a silver filling that I was like, ‘Whoa, this is human!’ and started to freak out,’ said one of the girls.

The local coroner said these second remains were more skeletal than the first, which still bore organ tissue. The cause of death remains unknown.

On July 25, back at Swim Beach, a third set of remains were discovered, encased in mud at the waterline. A fourth set were found on Swim Beach two weeks ago.

Experts say it is too early to work out an identity and cause of death of the latter finds, but staff at Las Vegas’s ‘Mob Museum’ have a shrewd idea who ended up in the barrel. They believe he is Johnny Pappas, who worked in the casino industry but had ‘connections’ to the Mafia. He worked for the Argent Corporation, a front company for mobsters who owned four big Las Vegas casinos from which they ‘skimmed’ the profits (under-reporting takings to the government and pocketing the remainder).

Pappas, a Greek-American, kept a boat on Lake Mead and disappeared one night in 1976, after telling his wife he was going to a restaurant to meet two men who were interested in buying the boat. Three days later, his car was discovered with the keys in the ignition in a casino car park.

The man suspected of killing him was Tony Spilotro, a Chicago ‘enforcer’ and Mafia captain in Las Vegas. The prolific hitman was considered a suspect in almost 20 mob-related murders and disappearances from 1975 to 1977. 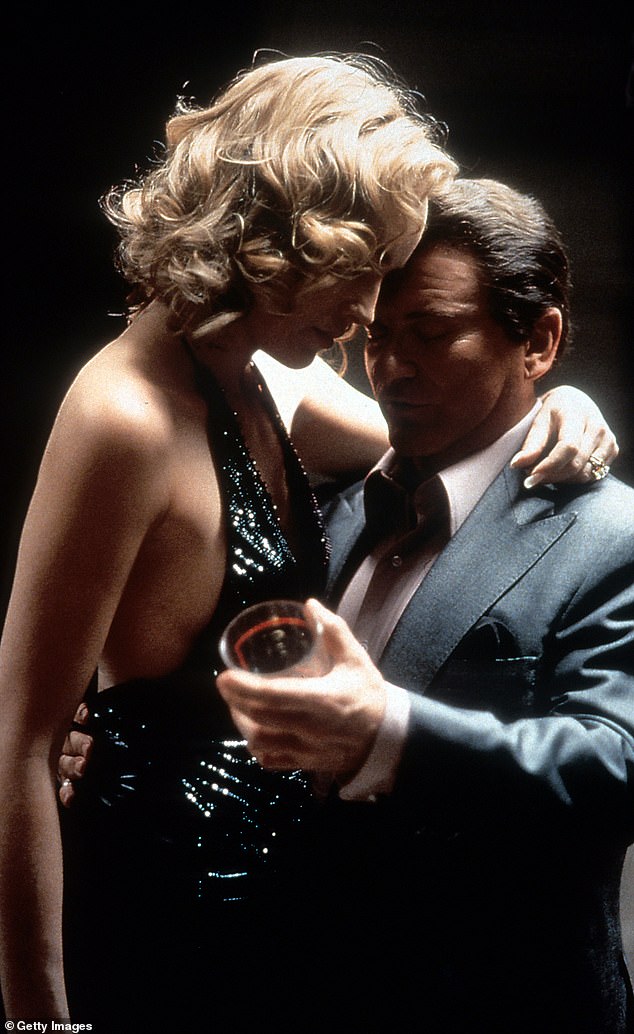 A body found at Swim Beach is believed to have been put there by Tony Spilotro, who inspired the character of Mafia psychopath Nicky Santoro, played by Joe Pesci in the 1995 Martin Scorsese film Casino. Pesci is pictured above with Sharon Stone in a scene from the movie 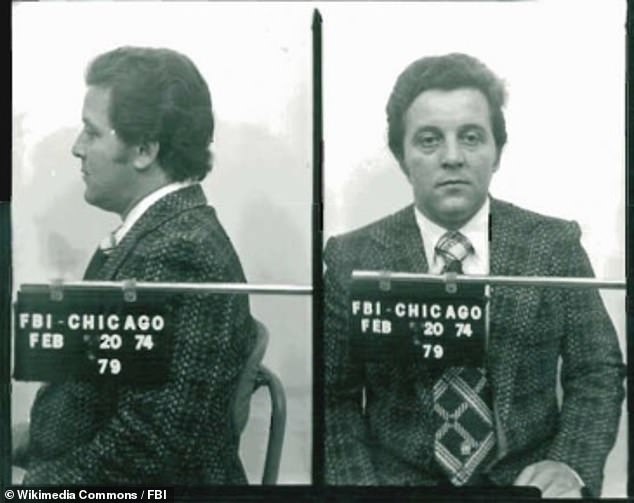 Director Martin Scorsese based his lead character Nicky Santoro on Spilotro in his 1995 hit movie Casino. Spilotro seen in a 1974 mug shot (above)

According to the Mob Museum, his favourite execution method was a shot to the head from a .22 handgun fitted with a silencer.

Given that Sin City in the 1970s has been described as ‘a bloodbath’ — it is calculated there were more gangland killings in Las Vegas between 1971 and 1974 than in the previous 25 years put together — there are plenty more possible candidates for the man in the barrel. One theory is that the killing was carried out by a motorcycle gang who were trying to muscle in on the Mob’s turf.

Another idea is that the victim could be George Vandermark, also a Mob casino manager, who disappeared after allegedly skimming as much as $15 million in coins from the lucrative slot machines at the Argent Corporation’s casinos.

Vandermark, who allegedly cheated not only the U.S. taxman but also his Mafia bosses, was last seen in an Arizona hotel in 1976. His son, who was reportedly in touch with him after he went missing, was found murdered the following year.

The authorities claimed Vandermark fled to Costa Rica, although a Mob informant insisted he had been shot dead and buried in the Arizona desert. His body has never been found. 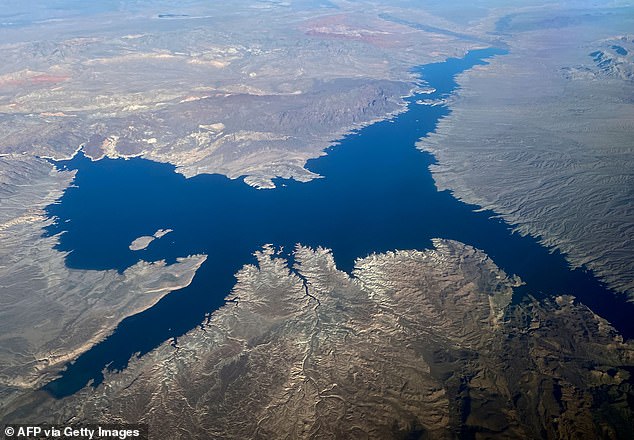 Treasure hunters have flocked to Lake Mead (pictured), drawn by reports of what may be revealed: including several ghost towns, an ancient Native American ‘lost city’ and a crashed World War II B-29 Superfortress bomber

Another possibility is that the barrel victim is a cocaine trafficker named William Crespo, who ‘flipped’ and became a witness for the government, only to disappear in 1983 before he was due to testify against an Argent executive and six of his associates.

There are even candidates the Mob Museum has never heard of — such as a mobster named Bobbi Eugene Shaw, who went missing in 1977. His sister, Barbara Brock, said police had contacted her and her nephew in May about collecting family DNA samples to check for a match. ‘I know he is gone but a definite knowing would make me feel better,’ she said.

And although some might think burying a body in the endless wasteland around Las Vegas couldn’t be simpler, historians say mobsters sometimes preferred a barrel as a more dramatic gesture. In 1976, a Vegas mobster was found dead inside a floating barrel as far away as Biscayne Bay, in Florida.

Whoever the latest barrel occupant turns out to be, it almost certainly won’t be the last grisly revelation from Lake Mead.