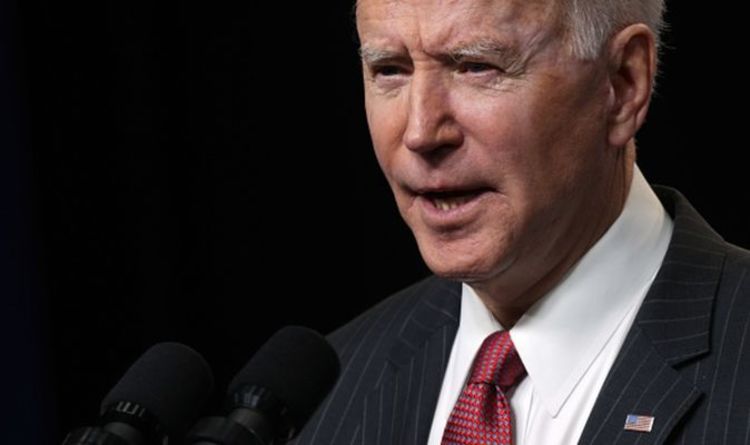 Merkel and Biden have ‘so many differences’ says expert

According to Politico, US officials are urging their Ukrainian counterparts to refrain from criticising Joe Biden’s deal with Angela Merkel on the Russian-German Nord Stream 2 gas pipeline. In a thin-veiled threat to Ukraine, US sources claimed that officials are warning relations between Kyiv and Washington could be at stake if the EU country rebelled against the project.

The pipeline will ship cheap natural gas from Russia to Germany risking key US-EU partner Ukraine to lose out the most from its ultimate completion.

Joe Biden’s administration’s position is at odds with much of Congress and with the Ukrainian government and other Eastern European allies, who have long held that American intervention can still block completion of the pipeline, which is nearly completed.

A source close to Ukrainian President Volodymyr Zelensky told Politico Kyiv’s position is that US sanctions could still stop completion of the project, if only the Biden administration had the will to use them at the construction and certification stages.

The source added Kyiv remains staunchly opposed to the project.

In a bid to reassure Ukraine, the US and Germany said they will take action against Russia if it uses the Nord Stream 2 gas pipeline to harm Ukraine or other Eastern European countries.

The agreement, hammered out in recent months by senior US and German officials and first reported by Reuters on Tuesday, will resolve a long-standing dispute over the $11billion pipeline, now 98 percent complete, being built under the Baltic Sea to carry gas from Russia’s Arctic region to Germany.

US officials insist they continue to oppose the pipeline, but said the US-German agreement would mitigate the possibility of Russia using energy as a weapon against Ukraine and other countries in the region.

The United States worries that Russia could cut off energy supplies to Ukraine or other countries as a form of aggression, and also fears that Ukraine will miss out on transit fees for gas now carried on an existing land-based pipeline.

The agreement will avert, for now, the resumption of congressionally mandated sanctions against Nord Stream 2 AG and its chief executive.

President Biden waived those sanctions in May to allow time for both sides to negotiate a way forward.

But the Biden administration reserves the right to use sanctions on a case-by-case basis, in line with US law, one of the sources said.

Germany also agreed to contribute to a new $1billion fund to help Ukraine transition to cleaner sources of energy and improve its energy security, said one of the sources.

Details about the funding were not immediately available, but the money is likely to come from private sources, backed with government guarantees, one of the sources said.

Bloomberg News reported earlier that Germany would provide an initial investment of $175million.

Mr Biden and Mrs Merkel failed to reach an agreement on the pipeline when they met last week, but said they agreed Moscow must not be allowed to use energy as a weapon against its neighbours.

At the time, Chancellor Merkel said Germany had a number of instruments at its disposal, including the possibility of imposing sanctions through the European Union, to respond to Russia, if needed.

Officials from both countries have continued working out the details in recent days, and senior State Department official Derek Chollet visited Ukraine on Tuesday to discuss the deal.

State Department spokesman Ned Price told reporters on Tuesday that Washington still viewed the pipeline as a bad deal for Germany and Europe but decided that sanctions were unlikely to halt the project and focused instead on addressing Russia’s potential use of energy as a weapon.

He said: “We continue to oppose the Nord Stream 2 pipeline. We view it as a Kremlin geopolitical project that is intended to expand Russia’s influence over Europe’s energy resources and to circumvent Ukraine.”

Mr Price declined to address the reported agreement, but said Germany had “put forward useful proposals” and they had made progress on the shared goal of ensuring that “Russia cannot weaponise energy flows.”

President Biden faces pressure from Congress to block the pipeline.

“Regardless of the foreign policy outcome the administration thinks it has achieved, there are still mandatory sanctions the administration has not imposed,” Senator James Risch, the top Republican on the Senate Foreign Relations Committee, said in a statement, referring to existing US law.