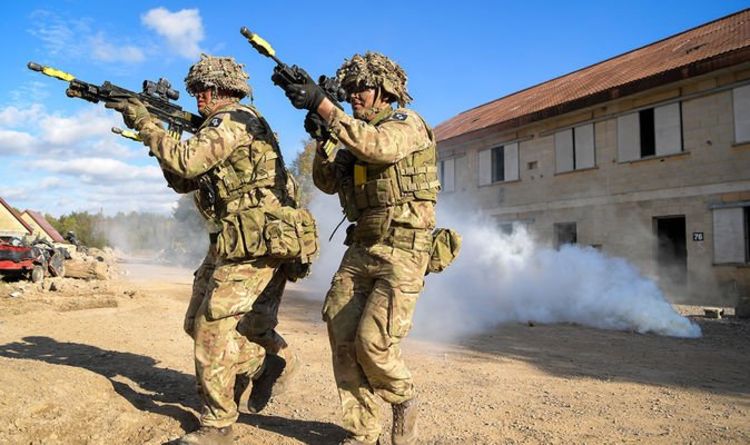 Britain has been praised for setting an example to EU countries after deploying a small team of troops to Poland’s border. This comes as the migrant crisis between Poland and Belarus worsens. Earlier today, the Polish Prime Minister called on NATO to act, saying the alliance must take “concrete steps” to resolve the crisis.

Mateusz Morawiecki added that Poland, Lithuania and Latvia may ask for consultations under Article 4 of the alliance’s treaty.

He said: “It is not enough just for us to publicly express our concern – now that we need concrete steps and the commitment of the whole alliance.”

Overnight, a group of about 50 people broke through defences on Poland’s border with Belarus on Saturday as the situation becomes increasingly tense.

Viktorija Starych-Samuoliene, co-founder and director at the Council on Geostrategy, told LBC’s Iain Dale that she hoped EU countries will follow Britain’s example.

JUST IN: Macron hits out after Britons made it clear ‘they don’t need France’

She said: “Sanctions might be one bit of the package but we also need to strongly consider military support if necessary.

“This is exactly what happened when the UK deployed 150 of its military personnel initially to provide some logistical support.

“This is a very important step to deterring the aggressive Belarusian regime. Hopefully, other European countries will follow.”

This comes as EU foreign ministers consider widening sanctions on Belarus on Monday to include airlines and travel agencies that are thought to have been involved in bringing migrants to the bloc’s border.

Ms Starych-Samuoliene responded: “Well, sanctions is one way we can deal with this aggressive regime backed by Russia and its leader.

“The fifth package of sanctions that could be implemented as early as next week could potentially help the Belarusian leader re-evaluate his actions.”

On Sunday, Russian President Vladimir Putin told state TV that Russia was ready to help resolve the crisis on the border.

The Ministry of Defence said the British military personnel were deployed to look at “how we can provide engineering support to address the ongoing situation at the Belarus border”.

Thousands of migrants, many of them refugees, remain trapped on the border in freezing conditions.

The Polish police also accused Belarus of trying to harm its officers.

The helmet of an officer serving at the border was damaged after a stone was thrown at him.

The spokesperson for Poland’s security services, Stanisław Żaryn, tweeted today that trucks carrying stones and rubble from Belarusian construction companies were seen near the border.