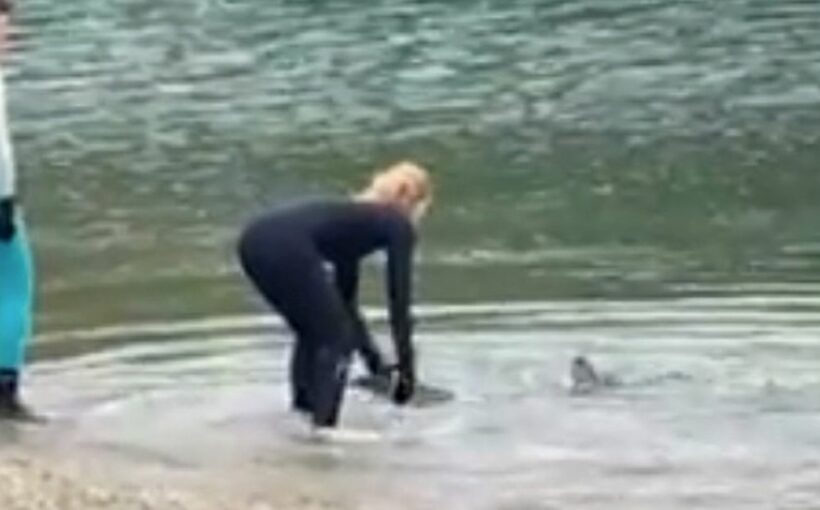 A blue shark has been spotted swimming close to the shore of a UK river, sparking fears for its welfare.

The big fish was seen making its way down Cornwall's River Fal on Wednesday afternoon and was even attended to by a woman trying to ease it away from the bank at Trelissick Gardens, near Feock.

Suzie Francis caught the interaction on camera and it has already prompted mixed reactions from a local fisherman who thinks nothing of it compared to a marine wildlife expert who worries the shark is disorientated, CornwallLive reports.

Suzie told BBC Radio Cornwall: "I thought he was in a bit of trouble, but he was fantastic. I was speaking to a fisherman down there and the fisherman was saying that, actually, he didn't think he was in trouble." Yet Dan Jarvis, of the charity British Divers Marine Life Rescue, told the BBC: "This is a real worry for us because they don't normally come up so close to beaches like this.

"Our worry is that it is injured or unwell and might need some medical attention.

"Our advice is to ignore it and give it a wide berth. It could be disorientated and it's best for our team to monitor it, to give it the space and time to do what it wants.

"It could have just come for a look and will swim off when it's happy to, but if it's unwell we don't want to cause it any more stress by people getting into the water and interfering with it."

Blue sharks are common in UK waters from June to October. They feed mainly on small fish and squid and, despite an incident earlier this summer which saw a blue shark bite a snorkeler during a 'shark dive' experience, they do not tend to attack humans.

The survivor from the attack near Penzance said: “I just wanted to say that despite how the trip ended, it was amazing to see such majestic creatures in the wild and I don’t for a second want this freak event to tarnish the reputation of an already persecuted species.

"Thank you to the trip team for getting me back to shore quickly and carefully and making me feel as safe as I possibly could.

"We all take these risks when we enter the habitat of a predator and we can never completely predict the reactions of a wild animal.“

A spokesperson from Blue Shark Snorkel explained to the Daily Star that they were speaking to shark experts to find out why the usually-harmless and friendly shark sank its jaws into a snorkeler's leg.

They are usually between 10 and 13ft long and it is believed that they can live up to 20 years.