Wellington: Pacific Rim leaders have agreed to do all they can to improve access to coronavirus vaccines and reduce carbon emissions, but geopolitical tensions remained at the conclusion of the APEC summit on Saturday.

US President Joe Biden and Chinese President Xi Jinping were among those taking part in the overnight online meeting of 21 leaders at the end of the annual Asia-Pacific Economic Cooperation (APEC) forum being hosted virtually by New Zealand.

A joint statement by the leaders said widespread access to vaccines was a priority. 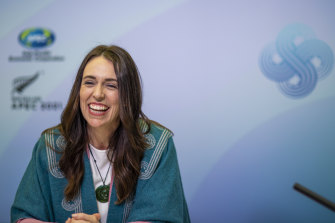 New Zealand Prime Minister Jacinda Ardern smiles as she addresses the APEC Leaders forum via video from Wellington on Saturday.Credit:APEC/AP

“Because nobody is safe until everyone is safe, we are determined to ensure extensive immunisation of our people against COVID-19 as a global public good,” the statement read.

The APEC leaders said they supported efforts to share vaccines equitably and to expand vaccine manufacture and supply, including through the voluntary transfer of vaccine production technology. 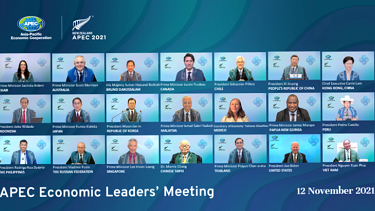 The focus was on areas in which the unlikely mix of leaders could find common ground. But the failure of the group to endorse a US bid to host APEC in 2023 pointed to some of the divisions that lie just beneath the surface.

A Southeast Asian delegate, who spoke on the condition of anonymity for not being authorised to publicly discuss the issue, said Russia had refused to support US hosting the gathering unless some of its diplomats were removed from a US blacklist or allowed to enter the US to participate.

The delegate said the US resisted Russia’s demands because issues involving America’s security were considered “non-negotiable”. And because APEC works on a consensus basis, Russia’s objections were enough to at least temporarily derail the bid. 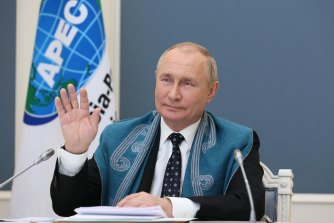 NZ Prime Minister Jacinda Ardern said she expected APEC would reach agreement around the US bid by the end of the year, and said the atmosphere in the room was pragmatic, despite the geopolitical tensions.

“It was constructive, it was positive and convivial, and there was a real common sense of purpose among members,” Ardern said.

Xi and Biden will hold a virtual summit, their first, on Tuesday morning AEDT, the Chinese Foreign Ministry said on Saturday. The leaders will exchange views on bilateral relations and issues of common interests, said spokeswoman Hua Chunying.

The White House confirmed the two would hold the virtual meeting on Monday night, US time, to discuss “ways to responsibly manage” bilateral competition and “to work together where our interests align”. It comes after the US and China surprised the world by announcing a joint effort to combat climate change at the COP26 summit this week.

White House press secretary Jen Psaki earlier expressed gratitude to the “vast majority” of APEC members who support the US as host of the 2023 gathering, but declined to name the lone country that had yet to agree. She was optimistic the matter could be resolved.

“Our hope is certainly that we move past this impasse, that it is resolved and that we can continue the positive momentum on economic cooperation through APEC,” Psaki said.

In a White House statement issued after the meeting, Biden focused on deepening economic partnerships in the region with the goal of fair and open trade, and noted that America has shipped 64 million vaccine doses to APEC economies.

The deep rifts between some members of the group were highlighted during the week by a warning from Xi against allowing tensions to cause a relapse into a “Cold War mentality”.

In other areas of agreement, the group emphasised the importance of the World Trade Organisation as an arbiter of trade rules. APEC said they wanted to see a pragmatic, multilateral response to COVID-19 at a WTO ministerial meeting later this month.

“We acknowledge the need for urgent and concrete action to transition to a climate resilient future global economy and appreciate net zero or carbon neutrality commitments in this regard,” the statement read.

In all, APEC members account for nearly 3 billion people and about 60 per cent of the world’s GDP.

Many countries in Asia face the challenge of balancing Chinese and US influence on the economic and geopolitical fronts.

China claims vast parts of the South China Sea and other areas and has moved to establish a military presence, building islands in some disputed areas as it asserts its claims.

Both Taiwan and China have applied to join a Pacific Rim trade pact, the Comprehensive and Progressive Agreement for Trans-Pacific Partnership, with Beijing saying it will block Taiwan’s bid on the basis that the democratically governed island refuses to accept that it’s part of Communist-ruled China.

Officials said they made significant progress during some 340 preliminary meetings. APEC members had agreed to reduce or eliminate many tariffs and border hold-ups on vaccines, masks and other medical products important to fighting the pandemic.