Home » How can I spot Covid vaccine side effects? 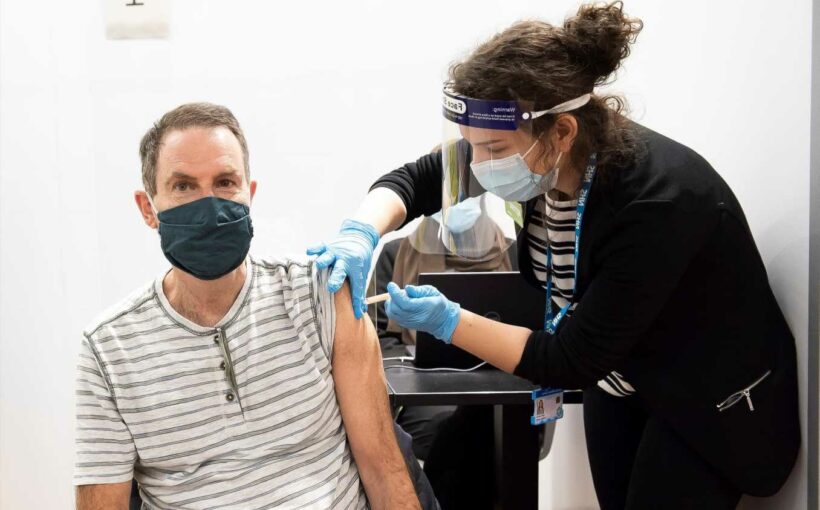 MILLIONS of Brits are yet to receive a Covid vaccine.

And when they do, they may feel under the weather for a couple of days. 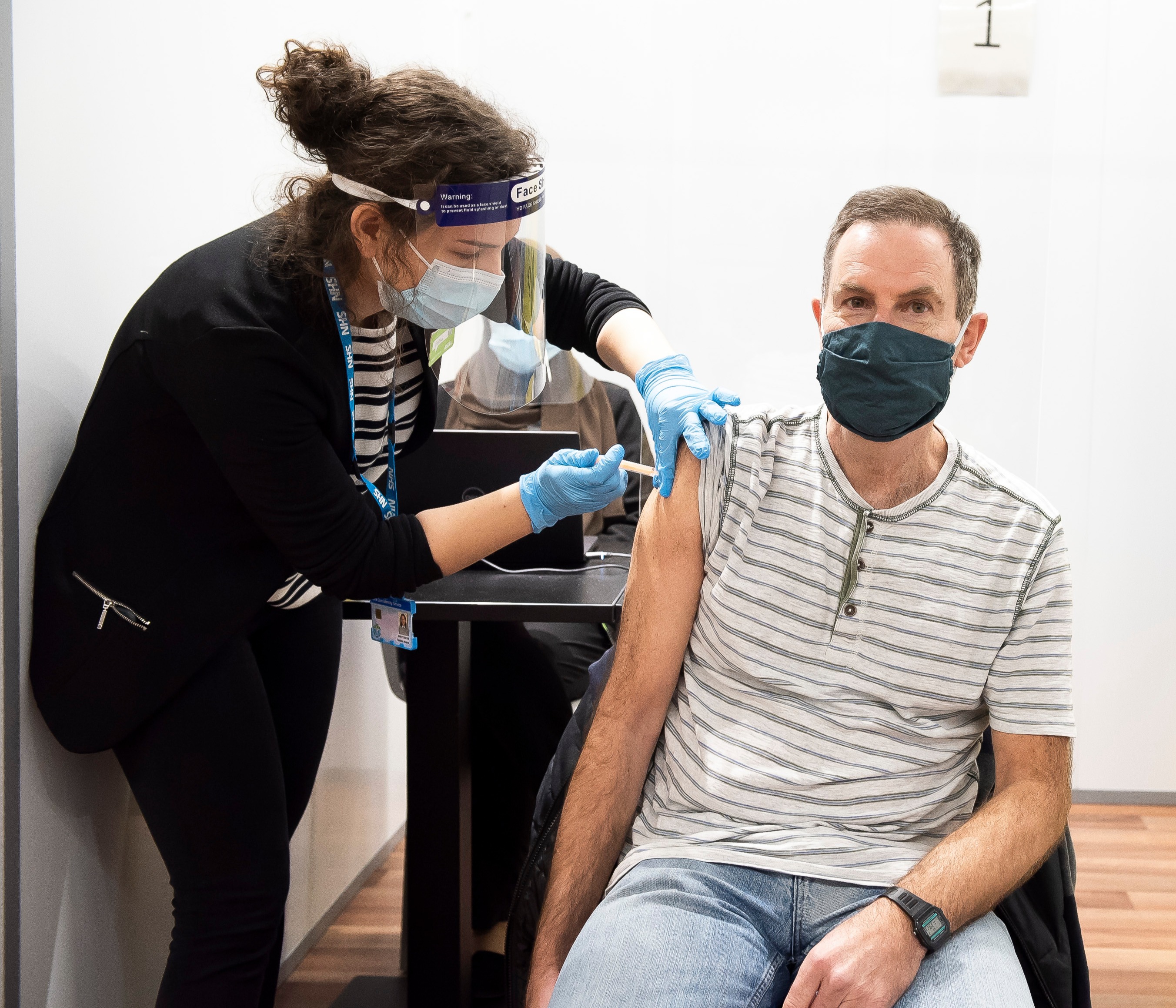 Although proven to be safe and effective, the jabs may cause short-term side effects.

They vary depending on the jab, but overall an estimated one in five people will experience at least one symptom, data suggests.

Pfizer/BioNTech's jab was first to be approved in the UK shortly followed by Oxford/AstraZeneca's vaccine. The Moderna vaccine came on stream in April.

They each require two doses to provide longer-lasting protection, with a maximum interval of 12 weeks between them for each vaccine.

The vaccine programme is in its second phase, speeding through the healthy population under 50 years old.

As the rollout gets closer to those in their 30s, officials are expected to announce that anyone under 40 will be offered an alternative to the Oxford/AstraZeneca jab.

While it is natural to question a new vaccine, experts told The Sun the public can be reassured of its safety.

The evidence shows common side effects are similar to those seen with the flu jab.

Therefore if you are feeling feverish, achey, and a bit like you have a hangover, it's likely to be caused by the vaccine you had in the two days prior.

Speaking to The Sun, Dr Sarah Jarvis, GP and Clinical Director of Patientaccess.com said that all vaccines cause side effects in some people – but that this is largely because they are designed to boost your immune system.

Dr Sarah said: "When your immune system is learning to fight off an invader, lots of white blood cells rush to where they’re needed and produce natural chemicals.

"That means most vaccines, including the annual flu vaccine, can lead to mild redness, tenderness of swelling around the area you had the injection.

"In the Covid-19 vaccine trials, all the side effects seen so far have been mild and very similar to those seen with other vaccines like the yearly flu vaccine."

But there are some signs to be wary of if they occur more than four days after a dose of the AstraZeneca vaccine.

The symptoms could be behind a serious, but extremely rare, type of blood clot.

If you experience any of the following symptoms from around four days after vaccination you should seek medical advice urgently:

How common are side effects?

A recent study from King's College London found that mild Covid vaccine side-effects that make you feel unwell only affect one in four people.

Of 627,000 people given a jab, 25.4 per cent experienced systemic effects – meaning side-effects excluding the injection site such as headache, fatigue, chills and nausea.

Some 66.2 per cent reported local side-effects – where the injection took place in the arm – included pain, swelling, tenderness and swollen armpit glands.

Participants who had previously had coronavirus were more likely to have side effects after a jab by two to three times. And younger people and women are more susceptible.

A report from UK medicine regulators said most people have "mild and short lasting" side effects in line with "a normal immune response to vaccines – including a sore arm and fatigue".

The MHRA found around one in ten people will experience side effects after having the jab, the most frequently reported being injection-site tenderness and pain, headaches, fatigue, joint and muscle pain, fever, chills and nausea.

But there has been a lot of attention on the AstraZeneca vaccine in recent weeks after the MHRA said the evidence was firming up that it caused blood clots.

The events are extremely rare and officials say people should still get the jab if offered it.

Here is everything you need to know about what to expect:

What are the most common side effects?

In clinical trials, the most common side effects of all three vaccines, affecting one in ten people, are:

A range of other side effects have been reported to health regulators both in the UK and US, including a change in menstrual cycles and the onset of tinnitus.

But there is no proof the drug caused the side effect, there just has to be a suspicion that it may have, and it could just be a coincidence.

The most common side effects of the Oxford-created vaccine are injection site tenderness (64 per cent) or pain (54 per cent), fatigue (53 per cent) and headache (52.6 per cent).

Side effects in the Oxford/AstraZeneca vaccine typically affect those who are under 65 years old.

Immune activity declines as we age, which may explain why older people do not feel the effects of the immune system kicking into action.

But this does not mean they have lower antibody levels against the disease once receiving a vaccine.

Medicine regulators in the UK say there is a “plausible link” between the AstraZeneca vaccine and blood clot cases, first flagged in March.

There have been 242 cases of 28.5 million first doses and second doses of the AstraZeneca jab, data to April 28 shows.

It means the overall chance is just 10 in a million.

Although cases have been in people aged up to 93 years old, there is a trend towards younger people, which is why those in their 30s and younger will be offered an alternative.

Cases have mostly occurred in women, but officials say this may only be because more women have had the vaccine as a result of working in the NHS.

The risk of a blood clot is so miniscule that people are better off getting the jab when offered than not, experts say, considering Covid is more likely to cause a blood clot than the vaccine.

One study from the University of Oxford found that the risk of a brain blood clot from Covid is up to ten times higher than after a vaccine.

The risk of a brain blood clot after the AstraZeneca vaccine was five in a million. But for people who had Covid, the risk was almost 40 in a million.

But the researchers said not all cases studied had low blood platelets – seen in people who have had a brain blood clot after the AZ jab. 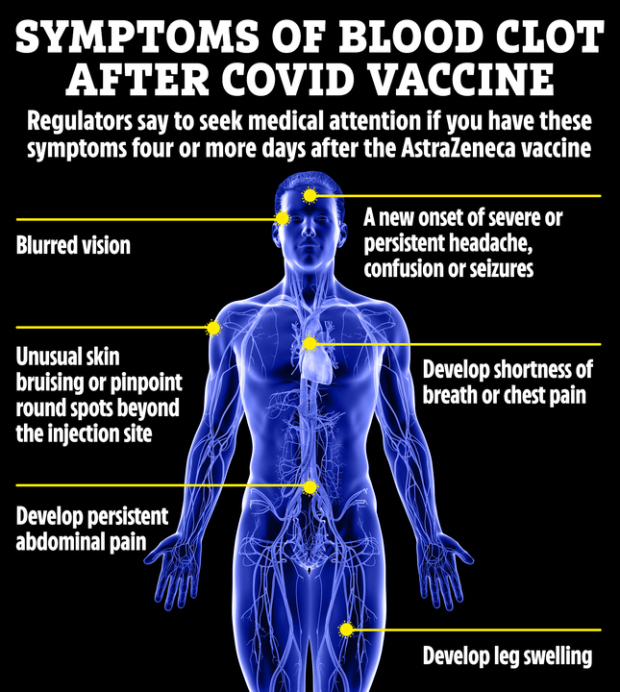 Scientists at Pfizer said their extensive trials showed the vaccine is "generally well tolerated in all age groups".

The Pfizer vaccine has not been linked with the same rare cases of blood clots with low platelets, like the AZ jab.

But after the vaccine started being given to people in the UK in December, some cases of anaphylaxis were reported.

Now, the MHRA does not recommend people who have known allergies to the vaccines' ingredients get the jab. 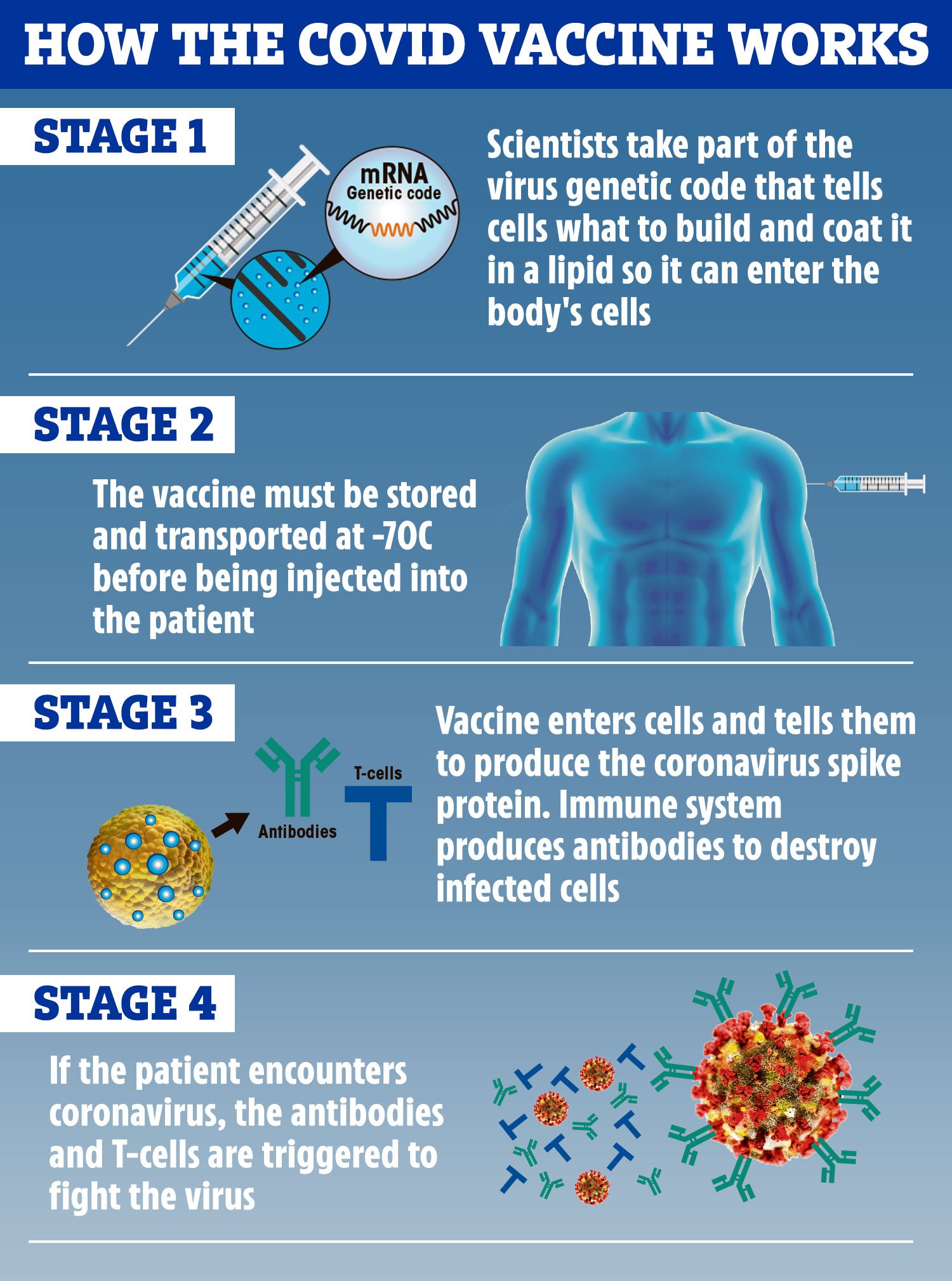 In early trials of the Moderna vaccine – which uses the same technology as the Pfizer jab – half of patients suffered a common side effect.

In a report published in December, the FDA said that 68 per cent of people had fatigue after the jab, and another 63 per cent had a headache.

An analysis of seven cases of Bell's Palsy after the Moderna or Pfizer vaccine, published in the medical journal JAMA, suggested the condition was no more frequent in Covid jab recipients compared with other vaccines.

The authors added, “if an association between facial paralysis and mRNA Covid-19 vaccines exists, the risk is likely very low, as with other viral vaccines”.

The CDC also said that one in ten patients who got a Moderna jab experienced swollen lymph nodes after the first shot, rising to 16 per cent after the second shot.

Experts have previously warned this could be mistaken for breast cancer in women.

The Moderna jab has been linked with "Covid arm" – red and inflamed skin at the injection site after having a dose.

A report in the New England Journal of Medicine revealed that there had been at least 12 incidences and the reactions were seen almost immediately.

"Having a big red splotch on your arm for a couple of days may not be fun but the reality is there's no need to panic and no reason not to get your second shot."

DO VACCINES PROTECT EVERYONE?

No vaccine is 100 per cent effective, therefore some people will still get Covid even if fully vaccinated.

In the Pfizer trials, eight people caught the virus of around 20,000 people were given the vaccine.

This is in contrast to 164 people who fell ill when taking the placebo drug – with nine becoming severely ill.

The researchers only looked for symptomatic Covid-19. Therefore there may have been more vaccinated people who got Covid but showed no symptoms.

It's not known why some people didn't respond positively to the vaccine – but a success rate of 95 per cent is similar to other vaccines.

Experts at Oxford stated that interim results from the UK and Brazil trials showed that the vaccine can prevent 70.4 per cent of Covid-19 cases.

Of 8,597 trial participants who received a vaccine, 84 got symptomatic Covid disease compared with 248 who got a dummy jab – nine of whom got severely ill and two died.