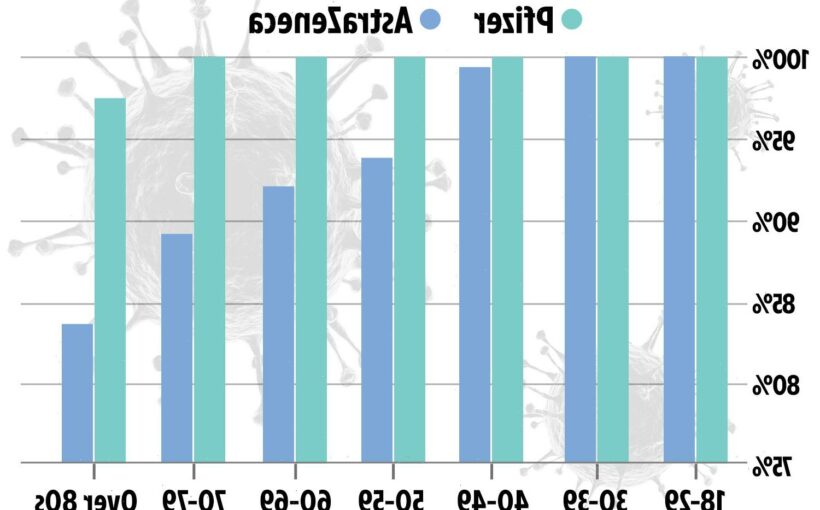 THE AstraZeneca Covid vaccine appears to be slightly weaker than Pfizer's – a major study suggests.

New research found those who had the AZ jab were less likely to have antibodies – key to fighting off the virus. 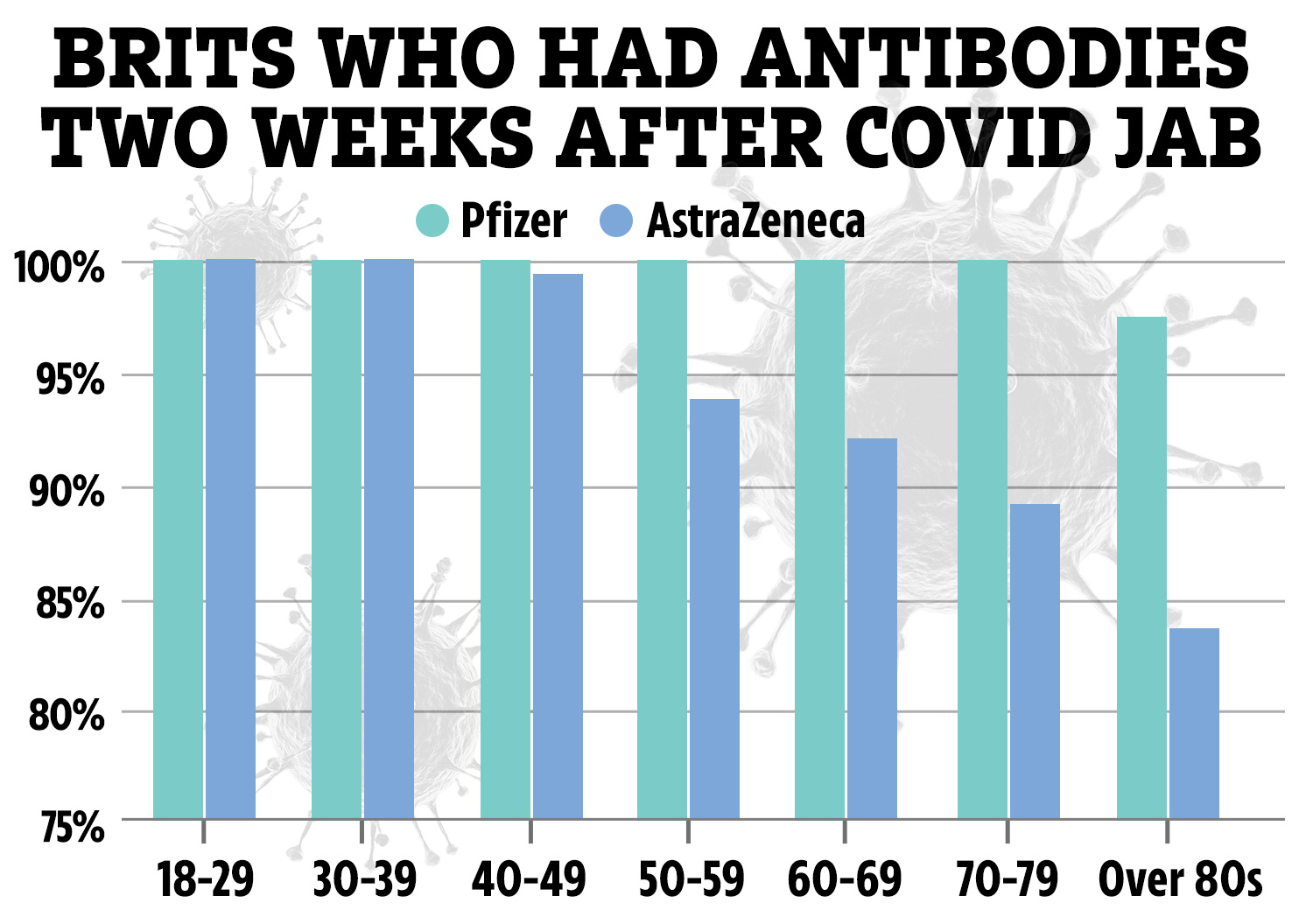 Around 85 per cent of elderly Brits who had two AstraZeneca vaccines had detectable levels of antibodies, Imperial College London researchers found.

Whereas about 98 per cent of those who had both jabs from Pfizer had developed the virus-fighting proteins.

Antibodies are not the only line of defence formed by the body after vaccines, but they are a good measure of how protected a person might be.

Experts were not surprised by the findings, with one saying the AZ jab is less likely to trigger immunity as it uses a weakened cold virus.

However, the level of protection is still good and it is still vital to get both doses of any jab offered to you.

Both Pfizer and AstraZeneca have been shown to be very effective at stopping severe illness and death.

It comes as Brits have again been encouraged to get their second vaccine – as scientists found it strikingly boosts immunity.

The REACT2 study, which has been tracking antibody levels in the population throughout the pandemic, noted the importance of getting both doses.

Their latest results, from May, showed 60 per cent of the population had antibodies – the figure is much higher now.

They also found vaccine take-up to be relatively high – but said antibodies were 30 per cent less likely to be found in men or in people who had had Covid.

Scientists behind the study said having two jabs is vitally important to stave off serious illness from the Delta variant, dominant in the UK.

Antibodies are produced by the first injection, but the amount varies between age groups and vaccine type, with the second jab produced much more.

The report says: "Following two doses of Pfizer-BioNTech vaccine, antibody positivity was 100 per cent at all ages except 80 years and older when it was 97.8 per cent. 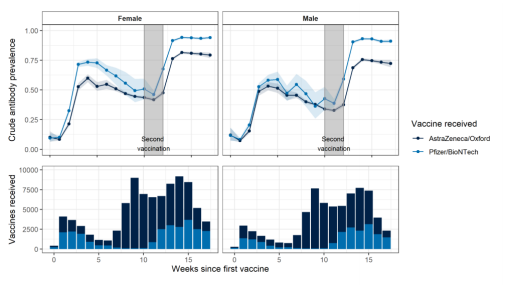 Prof Graham Cooke, Professor of Infectious Diseases, Imperial College London, said: "It's variable as to how many antibodies after one dose of AstraZeneca or Pfizer but second dose overrides that with good response.

"Both of the main vaccines require that second dose to neutralise the virus properly."

Vaccine hesitancy was seen at the time over side effect fears, waiting to see if the jab would have the right effect and long-term health fears.

But the picture could be different now, with more people having had their first and second jabs ahead of Freedom Day on Monday.

All adults over 18 can now get their second vaccine eight weeks after their first now.

Yesterday Dr Yvonne Doyle, Medical Director of Public Health England, said: “Cases are rising rapidly. We knew that as we opened up cases would increase, but thankfully due to the vaccine, deaths and hospital admissions are not rising as fast as cases.

"If you have not had the vaccine, book your first and second dose as soon as you can.

“Restrictions are currently still in place, it is important to follow them, and when they lift on Monday there are still steps we can all take to protect ourselves and loved ones such as wearing a mask in enclosed spaces, opening a window if you’re meeting in close contact indoors, and getting tested and staying at home if you have symptoms.

"The pandemic is not over, and we must all remain vigilant.” 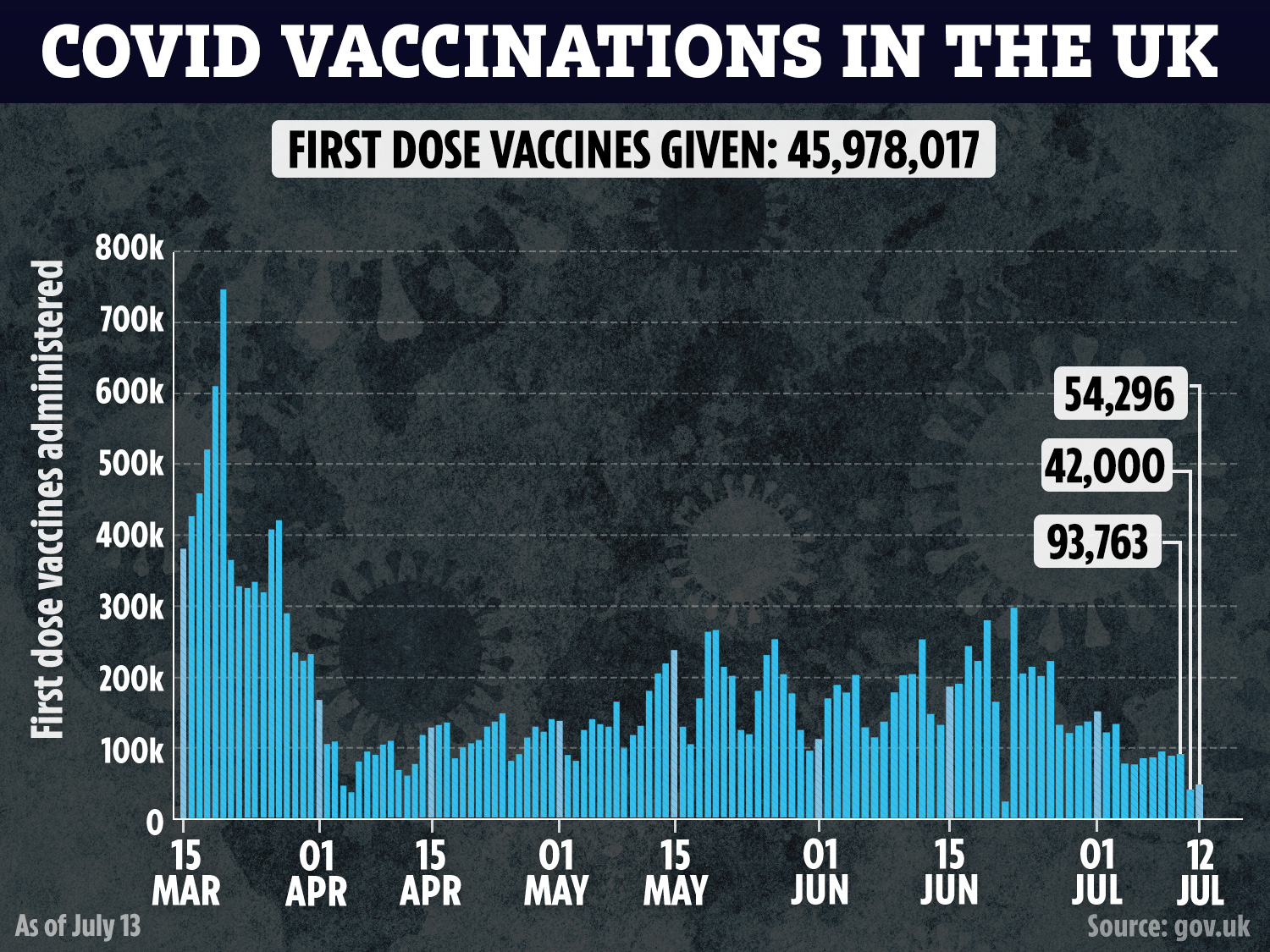