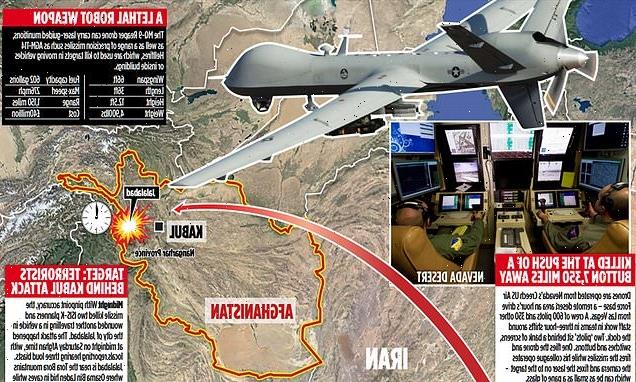 ‘Vaporised’ on a tuk-tuk: Two ISIS-K Kabul bomb plotters were killed by US drone strike while riding on the back of a three-wheeled motorbike in northern Afghanistan

Two senior ISIS-K operatives who plotted the Kabul airport carnage were killed in an American drone strike while riding a tuk-tuk, it has emerged.

The terrorists died immediately – and an associate was injured – in the revenge attack in the remote city of Jalalabad in Nangarhar province near the Pakistan border, the US military said last night.

The men, who were described as ‘planners’, are understood to have been sitting at the back of the moving three-wheeler when they were hit by a missile strike from a MQ-9 Reaper drone. 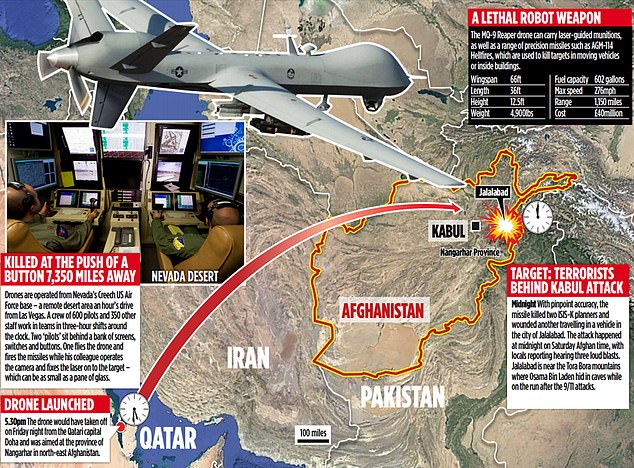 Defence chiefs at the Pentagon refused to release the names of the dead terrorists, but it is thought they were planning more attacks at the airport, where more than 170 died in a suicide bomb blast last Thursday.

According to terrorism experts, ISIS-K is far more brutal than IS in Syria or any of its affiliates. It has targeted maternity wards, schools and vulnerable minority groups in Afghanistan, killing thousands since it was founded in 2015.

Photographs of the burnt-out tuk-tuk emerged on social media last night. It could be seen next to a crater at least 4ft deep.

‘It was a single mission to get these targets. They were ISIS-K planners and facilitators and that’s enough reason there alone. I won’t speak to the details of these individuals and what their specific roles might be,’ Pentagon spokesman John Kirby said last night.

Residents in Jalalabad said they heard at least three loud bangs at midnight on Saturday and added that others were also hit. 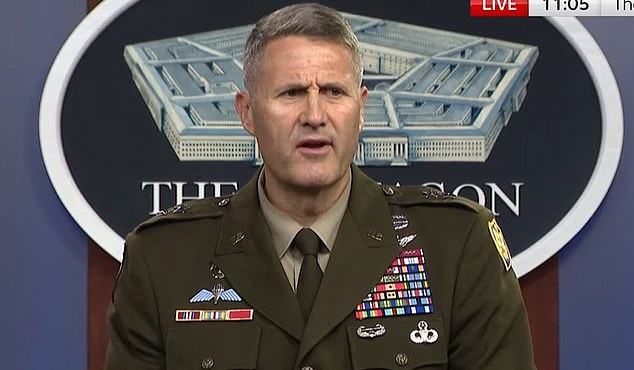 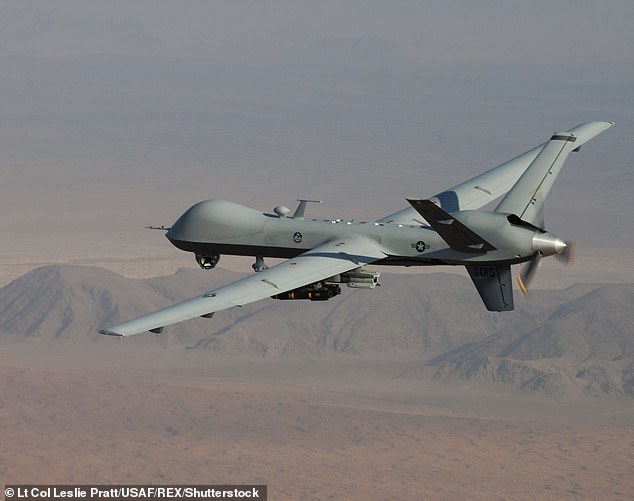 The men, who were described as ‘planners’, are understood to have been sitting at the back of the moving three-wheeler when they were hit by a missile strike from a MQ-9 Reaper drone (pictured)

‘Women and children are among the victims,’ said Malik Adib, a city elder who is helping the Taliban investigate the attacks.

The drone strike was ordered after Joe Biden said there would be a swift response to the airport attack, which left 13 US soldiers among the dead. The President’s national security advisers warned him last night that there could be further attacks at Kabul airport as the US winds down its evacuation programme ahead of Tuesday’s deadline.

With thousands of Afghans still expected to flock to the airport in the coming days, it could provide perfect cover for another suicide bomber to get close to US troops manning the gates.

Mr Biden said last night said there would be further strikes against ISIS-K and warned that the situation on the ground continued to be ‘extremely dangerous’.

He added: ‘This strike was not the last. We will continue to hunt down any person involved in that heinous attack and make them pay.

‘Our commanders informed me that an attack is highly likely in the next 24 to 36 hours. I directed them to take every possible measure to prioritise force protection.’ 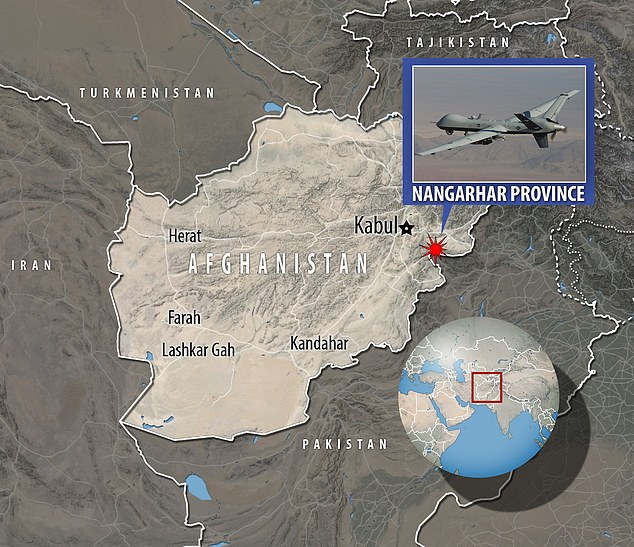 ISIS-K had been a largely spent force until the Taliban retook most of Afghanistan.

Taliban fighters freed prisoners from the Bagram air base jail and from prisons in Kabul, unaware that dozens of dangerous ISIS-K members were being held there. Thousands of other members are thought to have been released in other parts of the country.

Abdul Sayyaf, a terrorism expert on Afghanistan, said: ‘This is the most brutal terrorist group I have seen in Afghanistan, and more brutal than other IS groups.’

ISIS-K launched an attack in a maternity ward in a Kabul hospital in May 2020, killing two babies and 15 mothers and nurses. Earlier this year, a car bombing outside the Sayed al-Shuhada girls’ school in Kabul left 90 dead, most of them girls aged between 11 and 15.

The group has routinely bombed Shia mosques as well as Hindu and Sikh minority communities in Afghanistan.

Like IS in Syria, it is infamous for making gruesome videos of enemies being killed. One video released in 2017 showed ten Taliban fighters being made to lie down on a chain of explosives and then blown to pieces.

A former ISIS-K detainee said the group left a platter of severed heads outside his prison cave and their executioner used a special 2ft-long knife to behead victims.