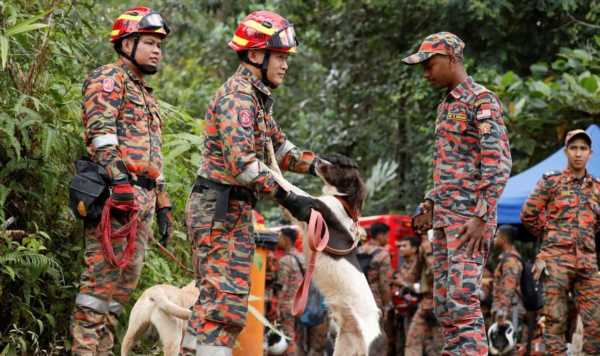 At least 24 campers have been killed and seven hospitalised at an unlicensed campsite in Kuala Lumpur, Malaysia after a landslide happened early Friday morning. Among those killed are seven children, according to officials.

At least 400 rescue workers spent Friday digging through mud to try and find any potential survivors, as nine people are still missing.

Norazam Khamis, the state fire and rescue chief has said the current chances of finding anybody alive is now slim, due to the weight of mud pressing down onto the campsite.

Heavy rain in the area has raised concerns about further landslides taking place, which caused a temporary halt overnight.

However, Mr Khamis confirmed on Saturday that responders were being assisted by rescue dogs and excavators to continue the search.

At least 30 children and 51 adults were registered at the camp for an overnight stay, and Malaysia’s fire and rescue department said a 30m slope impacted the site in a “terrible tragedy”.

The New Straits Times has reported that 20 primary school teachers and their families were also at the campsite.

Health Minister Zaliha Mustafa has said one person injured in the mudslide was a pregnant woman.

A spokeswoman for the Singapore Foreign Ministry has confirmed at least three of its citizens were among those rescued from the landslide.

Singapore’s Prime Minister Lee Hsien Loong has expressed his “heartfelt condolences and sympathies to all those affected by the landslide”.

Nga Kor Ming, the local government development minister, has said the campsite was operating illegally and only had approval to run an organic farm.

Mr Nga said he has ordered all “high risk” camping sites across Malaysia to immediately shut down for the next week.

Those campsites deemed at risk include those near rivers, waterfalls and landslides.

One survivor of the landslide, Teh Lynn Xuan, said she and her mother were saved, but her brother had died and her other brother was injured in the hospital.

In an interview with Malaysian newspaper Berita Harian, she said: “We felt the tents becoming unstable and soil was falling around us.

“My mother and I managed to crawl out and save ourselves.”

A campsite worker, Thawng Uk, told Reuters they only survived the disaster after being awakened by neighbours.

He said: “I have never seen such a horrible incident. I feel so shocked and terrified,

“We could bring nothing at all as we urgently ran. We are asking around where to get shelter and food.”