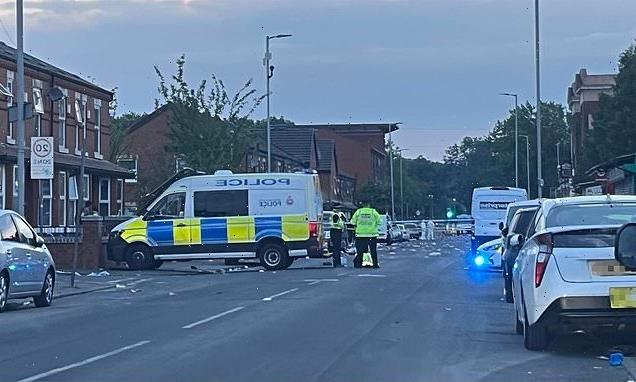 Man is killed in horror shooting in Manchester: Police launch probe after victim is found dying in street in early hours of the morning

A man has been killed following a horror shooting in Manchester in the early hours of the morning.

Emergency services rushed to reports of a firearm being discharged in Claremont Road, Moss Side, at around 12.15am.

The victim, a male believed to be aged between 18 and 25, had suffered serious injuries and was rushed to hospital. He died a short time later.

A large cordon remains in place around at Princess Parkway and Claremont Road, with forensic officers pictured at the scene as police probe the incident.

Police have advised residents to avoid the area, with officers yet to make any arrests in connection with the shooting.

Detective Superintendent Jude Holmes, of Greater Manchester Police, said: ‘Firstly, my thoughts are with the victim’s family and friends at this extremely difficult time in what is a devastating incident.

‘Whilst the investigation is ongoing and at its early stages, we’re working extremely hard to understand the full circumstances. 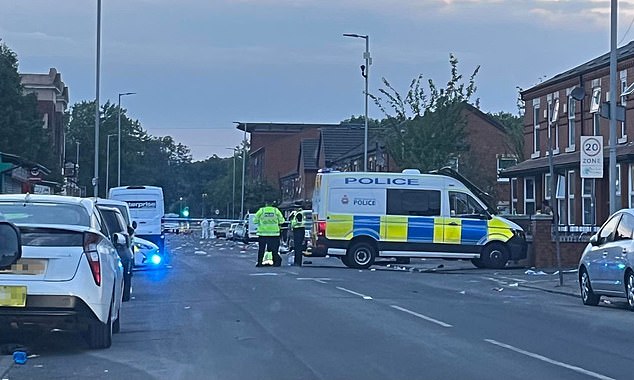 Police at the scene in Claremont Road, Moss Side, Manchester, this morning after a man was shot dead in the street

‘Our response has included increased patrols in the immediate area to keep the community safe, whilst a lot of work has been undertaken overnight and will continue today.

‘Any details that may help us is asked to get in touch, as we know there were a number of potential witnesses to this serious incident.’

It comes after nearby Alexandra Park hosted the Manchester Caribbean Carnival this weekend.

A statement from police added: ‘At around 12.15am on Monday, police were called to a serious incident on Claremont Road to reports of a shooting.

‘A man, who is believed to between 18-25 years-old was found with serious injuries and was taken to hospital where he was sadly pronounced dead a short time later.

‘An investigation has been launched and enquiries are ongoing. A scene is in place at Princess Parkway and Claremont Road so the local public and commuters are advised to avoid the area where possible.’

Anyone with information is asked to contact Greater Manchester Police on 101 quoting log number 40 of the August 15, 2022. Alternatively, details can be passed on anonymously to the independent charity Crimestoppers on 0800 555 111.