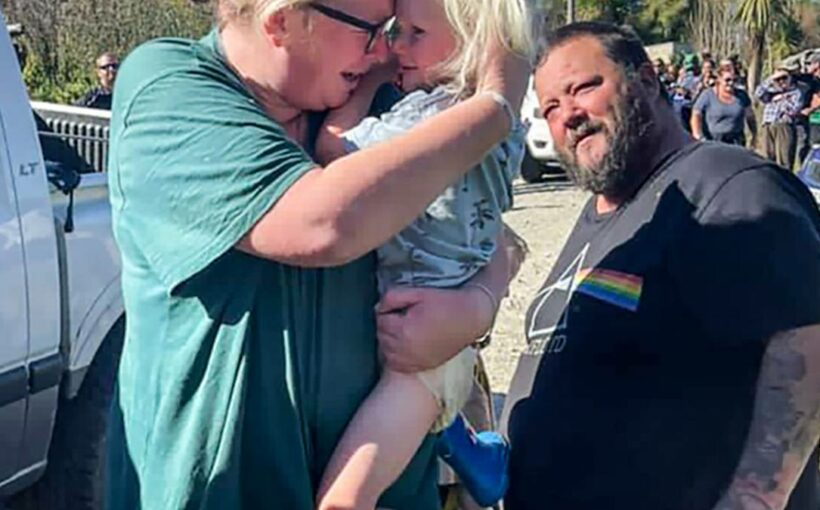 As 3-year-old Axle recovers in the hospital with his mum after spending the night alone in the bush, his family can’t thank their community enough – those who searched non-stop for 21 hours to find their little boy.

The young boy went missing on Tuesday afternoon on foot from his Tolaga Bay home with a small white dog in tow – sparking a massive community and police search effort.

Helicopters, drones and more than 100 volunteers scoured the area looking for the boy, who was found 21 hours later on the face of a hill – “wanting his mum”.

An emotional mum and dad embraced their son after he was found on Wednesday morning, as tears filled their eyes and crowds of volunteers cheered for them.

Dad Glenn was awestruck and emotional on Wednesday evening when asked about how the family was feeling after his son was found.

Any parent would know how difficult the 21 hours he was missing had been for the family, he said.

“There were hundreds of people searching, some people were even jumping into the river at 10.30pm yesterday looking for him.

“If I had to put [how we’re feeling] into a sentence it’d be that I wish every community in New Zealand was like this. They were amazing.

“It was unreal. I expected him to be dead,” he later told RNZ’s Checkpoint.

“When your child goes missing you can’t sleep, you can’t get warm. Every time you get cold you go to put a blanket on, you think ‘how could I do that when my child’s freezing?’ That’s what happens.

“He’s 3 years old in a nappy and T-shirt. Like I’ve said to everyone, if that was me last night in my undies and a T-shirt I would be dead. I’m not joking saying that. I don’t know how he did it.

“I just told him how much I loved him,” he said.

The boy was found 3km from home “wanting his mum”.

“Any 3-year-old boy who is away from their mum is going to be really upset.

“I never thought at any time that we’d lost hope. Certainly, time was against us but we kept open-minded.

“We’re really, really pleased with this outcome for not only the family but the community.”

He thanked the Tolaga Bay community and the volunteers who supported the search effort.

“Lots of aroha was passed on by New Zealand.”

But police had to keep optimistic as the best information they had was that Axle had wandered off.

“It’s one thing being in the bush cold over night, it’s another thing being three and on your own,” he told Newshub.

He said any distance for a young child to be on their own was too much and to be 3km away from his home was a considerable distance.

Neighbour Damon Jeffery, who owns the dog that was with Axle before anyone noticed they were both missing, has described more of the panic that started to set in that Tuesday afternoon.

Jeffery was the last person to see or hear from Axle before he disappeared on Tuesday afternoon.

Axle had been playing with Jeffery’s dog, Bro, as he worked inside his bus.

“All of a sudden they were gone,” he said.

When Bro returned home later without Axle, it sparked even more fears for the little boy’s safety.

Jeffery said he didn’t sleep a wink that night, fearing the worst.

He had been searching high and low ever since the youngster went missing, trying desperately to retrace his steps.

“I looked – honestly – I looked. The chopper looked, the police did. It was unreal how far out he was.”

The community could finally breathe a collective sigh of relief after hours of searching, when the boy was found on the face of a hill in rough terrain 3km from his home at 10.45am yesterday.

Gisborne man Gareth Hailey said he was one of many volunteers who had decided to help with the search as he had been unable to sleep out of concern for the little boy.

He joined friends from Gisborne who had stopped working early on Tuesday afternoon to help with the search.

He said about five people had been searching for the boy in the thick bush when one of the men heard a voice.

“He heard a kid’s voice so shot up and saw him jump out of the bush basically.”

Axle then started asking the rescuer for his mum.

“He was just wanting his mum. All he was asking for was his mum.”

Axle was driven home in a ute while sitting in the passenger seat on a woman’s – understood to be a family member – lap.

Tears filled his mother’s eyes as she approached the vehicle, trying to reach through the window to get to her boy.

She wrapped her arms around Axle, who was clutching a sandwich crust and wearing just a T-shirt, nappy and gumboots.

An emotional Jeffery said he also had to wipe away tears from his eyes when he saw Axle reunited with his parents.

“I can’t even imagine the relief that his parents are feeling right now. Just the look on their faces when they seen him turn up. It’s an unreal moment. I had a tear myself.”

Constable Richard Reeves told RNZ Afternoons he must’ve found somewhere warm to sleep as he was in “fit and healthy” condition when he was found.

“He’s obviously tucked up somewhere for the night, he had a few pine needles and stuff on him,” he said

“I’d say he’s going to be a good little hunter if he’s got those sort of survival skills at that age.”

It was a massive relief to find Axle alive and well because there would not usually be a positive outcome with a child of that age and with the night’s conditions, he said to RNZ.