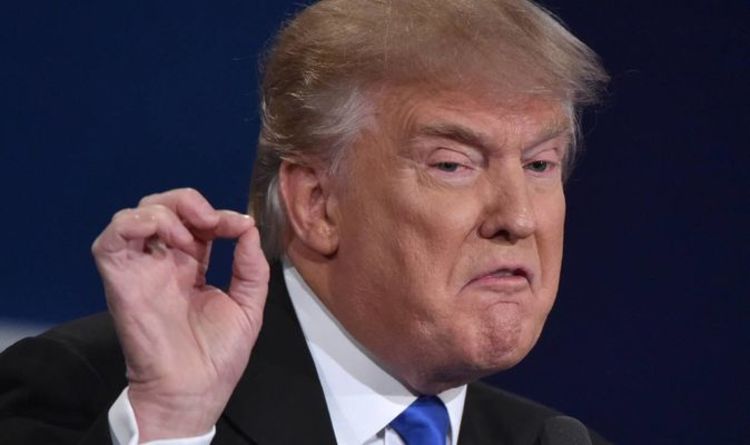 Trump hangs up on reporter asking about election 'lies'

Donald Trump appeared on broadcaster NPR where he discussed the coronavirus pandemic in the US and the future of the Republicans for the looming midterm elections. But the conversation quickly turned to Donald Trump’s accusations of election fraud which saw the former US head of state be relentlessly grilled for almost 10 minutes on the issue. Mr Trump appeared to have had enough after the interrogation and hung up after his claims were repeatedly shot down during a tense interview.

Mr Trump spoke to NPR journalist Steve Inskeep who challenged the former president on his claims the last election was rigged.

In the interview, Mr Trump suggested Joe Biden was unable to attract a sizeable crowd at his campaign rallies and could not believe he secured more votes than him.

He remarked: “Let me ask you this question. How come Biden couldn’t attract 20 people for a crowd?

“How come when he went to speak in different locations, nobody came to watch, but all of a sudden he got 80 million votes?

Mr Inskeep retorted and said perhaps the reason for Mr Biden’s victory was the divisiveness of Mr Trump’s own campaign.

Mr Trump went on to say there was election fraud found in Detroit which was debunked after no evidence was found.

The journalist then asked whether Mr Trump was telling Republicans to fight his corner on his claims of a rigged election if they wanted to secure his support.

Biden: Trump 'spread a web of lies' about 2020 election

“She’s very big on this issue, she’s leading by a lot.

“People have no idea how big this issue is and they don’t want it to happen again.

“It shouldn’t be allowed to happen and they don’t want it to happen again.

“And the only way it’s not going to happen again is you have to solve the problem of the presidential rigged election of 2020.”

Mr Trump thanked Mr Inskeep before cutting the interview off.

Joe Biden addressed Mr Trump during a speech marking the year anniversary of the Capitol Hill riots and attacked his claims of election fraud.

He said in his speech: “Here’s the truth, the former President of the United States has created and spread a web of lies about the 2020 election.

“He’s done so because he values power over principle because he sees his own interests more important than his country’s.

“And because his bruised ego matters more to him than our democracy or our constitution.”

Mr Trump was accused of inciting violence which led to the Capitol Hill riots after claiming he lost the election due to voter fraud.

Mr Trump responded to the speech made by Mr Biden and continued to argue the election was rigged.