Non-binary Royal Navy engineer, 23, is cleared of sexually assaulting male colleague after telling court they are innocent because they are ‘demisexual’ and needs a strong emotional bond before proceeding with sexual contact

A Royal Navy engineer has been cleared of sexually assaulting a male colleague after telling the court he couldn’t have done it because they are ‘demisexual’.

Able Seaman Triss Smythe’s demisexuality means they have to have a strong emotional bond with someone before they can think about sexual contact.

For this reason, AB Smythe said they didn’t find the complainant sexually attractive and could not be guilty of ‘grinding’ and kissing their fellow serviceman.

They told the court they even struggled to kiss their own female fiancee passionately at the start of their relationship, ‘let alone a colleague’.

The 23-year-old, an Air Engineering Technician, insisted they wrapped their arms around their fellow sailor and kissed him in an aircraft hangar in an ‘Intense’ but ‘platonic’ manner.

AB Smythe, who was known to use the phrase ‘I’m here and I’m queer’ around the workplace, had denied one count of sexual assault of non-consensual touching and claimed the kiss was simply a ‘peck’.

At Bulford Military Court, Wiltshire, the three day trial came to an end as the board delivered a not guilty verdict.

Able Seaman Triss Smythe (pictured) was cleared of sexually assaulting a fellow sailor, claiming they could not have done because they are demisexual

The court previously heard Smythe left his fellow serviceman feeling ‘violated and humiliated’ by putting his arms over his shoulders and ‘grinding’ up against him, before kissing him.

Both sailors had been wearing ‘paper thin’ summer overalls at the time and the alleged victim, who cannot be named for legal reasons, told the trial the kiss went on ‘for what felt like a lifetime’.

During the trial, the court heard Smythe ‘circled’ around the back of his colleague in a helicopter hangar at Royal Navy Air Station Yeovilton, Somerset.

Giving evidence, AB Smythe said their ‘demisexuality’ meant the kiss could not have been of a sexual nature. 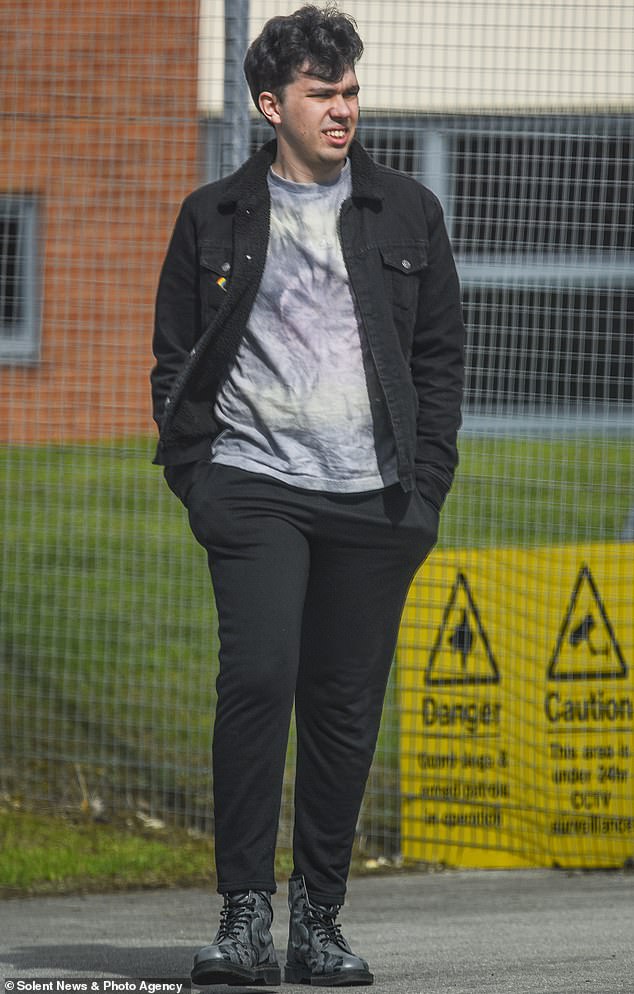 AB Smythe (pictured), 23, told the military court the kiss they gave their colleague was ‘platonic’ and simply a ‘peck’

On thier sexuality, AB Smythe told the court: ‘It’s not something I scream from the rooftops.

‘I always understand how difficult [coming out] is to do. It is hard, I’ve had to do that myself.

‘I am demisexual – with emotional requirements. It is on the asexual spectrum.’

When challenged that they were using their sexuality as a cover, AB Smythe replied: ‘I don’t use it as a cover.

‘The fact is I’m demisexual – sexual urge isn’t something that comes easily with my own fiancee, let alone a colleague.’

The court heard that AB Smythe, who has been ‘out’ as demisexual for ‘roughly two years’ since they started dating their now fiancee, waited three months before starting to feel sexual towards her.

‘I have nothing other than professional and platonic feeling for [the complainant],’ he added. 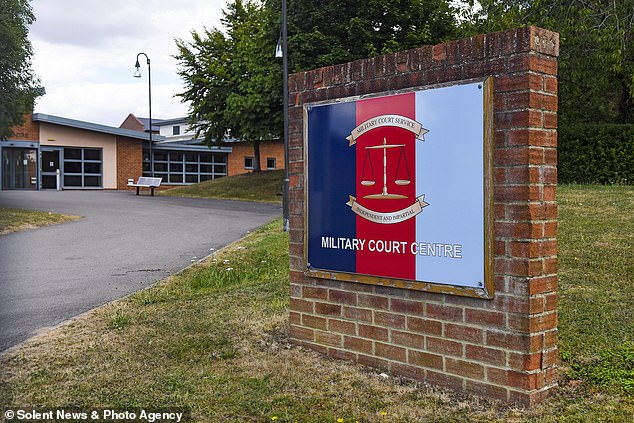 The trial is taking place at Bulford Military Court (pictured) in Wiltshire, where AB Smythe is standing accused of sexual assault by non-consensual touching

AB Smythe told the court that the complainant, had spoken to them in a ‘very personal’ conversation the week before.

They said: ‘After the conversation he came and threw his arms around me in a meaningful hug with a lot of emotion involved and very important that this hug happened.

‘He then went on to place a kiss on my cheek – how you would kiss a family member you care about.

AB Smythe told the court they hadn’t considered that sexual either.

‘I very much viewed it as a friend expressing what they couldn’t quite do in words. I had no impression of a sexual subtext,’ they said.

However, the complainant said this event never actually took place.

On the alleged sexual assault, AB Smythe said: ‘I walked alongside the aircraft.

‘At this point [the complainant] had clearly stopped working, I thought it’s as a good time to quickly go over and say hi.

‘Because of the events of [the week before] I wanted him to know that that display of platonic affection was nothing for him to be worried about and hadn’t changed our relationship.

‘I came up behind him and threw my arms over his shoulders and gave him a quick peck on his cheek.’

AB Smythe denied taking the complainant in a tight grip.

‘I gave him a quick peck on his cheek,’ they added.

When asked if it was slobbery, they replied: ‘No, it was meant to be a very quick split second type of thing.

‘I have no reason to lick him.

‘I don’t find him sexually attractive.’

On the allegation that they pressed their penis up against the complainant’s bottom, AB Smythe said: ‘The closest thing to his centre line would have been my right hip.

‘I won’t deny that he didn’t feel anything. It wouldn’t have been able to be my penis, through overalls, personal clothing system (PCS) and my boxers, and the same on him – it’s a bit of a stretch in my opinion.’

AB Smythe said the contact was ‘not in the slightest’ bit sexual, that they had ‘no reason to thrust into him’ and the kiss was ‘purely platonic, a between friends type of kiss’.

When told they had no right to kiss a colleague in the workplace like that, AB Smythe said: ‘I had the right to kiss him platonically in the same way he did to me.’