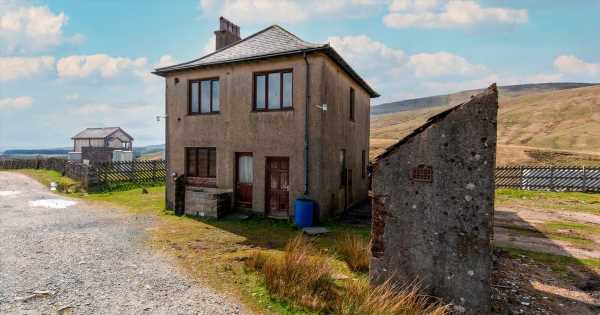 One of Britain's most remote homes, a former railway worker's cottage which is not even accessible by road, is up for sale for £300,000.

The derelict three-bedroom cottage is located next to England's most remote signal box that is still manned by Network Rail, on the Settle to Carlisle train line.

The "interesting investment", according to the estate agent, is a 20-minute walk to the nearest parking spot.

Pictures show how the former railway worker's cottage is surrounded completely by the rolling hills of the Yorkshire Dales.

The property is the last survivor of a row of three and was originally built for workers by the London, Midland and Scottish Railway between the world wars.

The other two cottages were older, built in the 1870s, and were demolished along with a lamp hut in the 1950s.

And despite the whopping price tag, the property is in need of an extensive renovation, with the walls being completely bare.

One of the bedrooms is almost completely blue, from floor to ceiling – whilst another bedroom is the same but in purple.

There is also currently no mains services available in the house.

When it was last occupied, electricity was generated through a windmill and water was transported by a trailer.

Interested parties are advised that it is a 20-minute walk from the parking space to the property, and would only be suitable for 4×4 vehicles and quad bikes.

The house is in Whernside, North Yorkshire, which is part of the Three Peaks challenge which approximately 200,000 people compete every year.

Three Blea Moor Cottages is being sold by estate agents Fisher Hopper, with an asking price of £300,000.

"Plans will be subject to the necessary consents – this is in the heart of the National Park – but for the right buyer with vision, there is great potential here." The cottage was originally built for workers by the London, Midland and Scottish Railway behind the world wars, and is the last survivor of a row of three properties.

The previous owner was John Myerscough, a recluse who was served with planning enforcement action by the Yorkshire Dales National Park Authority in 2010.

This was after he stored a large quantity of scrap vehicles and waste on the land, including five disused oil tanks, a caravan, a small digger and two shipping containers.

He compiled with the order and the site was cleared.