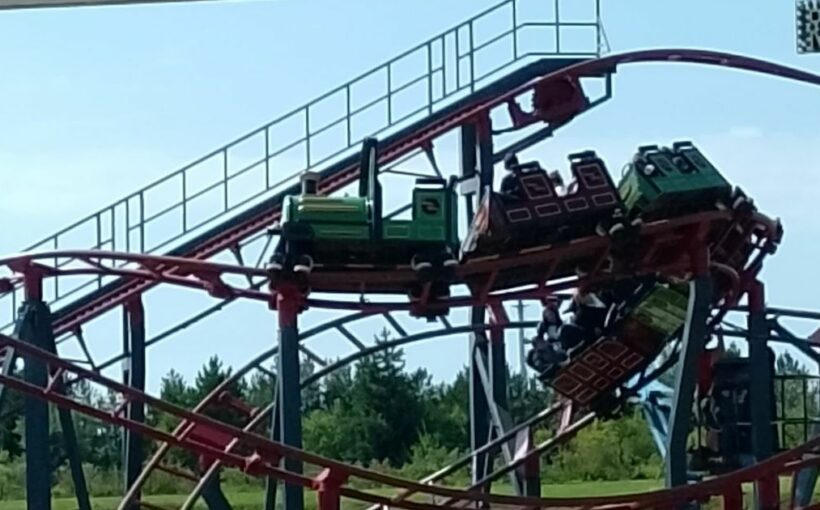 Photos have captured kids screaming as they dangled from a rollercoaster which had stopped on the tracks at Pleasureland in Southport, Merseyside on Saturday.

Horrified families and onlookers watched on as one girl was "carried off the ride unconscious" while her father desperately clambered off the ride to get to her, reports The Mirror.

Michael Bowman, 57, who had travelled with his wife Christine, 35, and eight-year-old son from Stoke-on-Trent told the Mirror that they left the park with safety concerns, after two more rides suffered technical issues.

He said: "We walked towards The Rocket and I thought something's not right there. All of a sudden a cherry picker came past us and all staff were guiding people out the way.

"We looked up and said 'Oh my God, it's stuck all the way round'. You could see that it was on an angle and they were all leaning.

"The parents had hold of the children because they were leaning out of the carriage on the bend. "We know that a young girl had passed out and the father was trying to climb over the barrier out of the ride to get to his daughter. You could see the worry in the father's face.

"The ambulance was on its way at that point. They must have been up there a good hour and a half."

He claimed that they were stranded at least 20ft in the air.

Maintenance teams for Pleasureland were rushed to the scene and began rescuing the 19 people trapped on the 22-person capacity ride with a cherry picker.

Paramedics and fire crews were also called to the scene on Marine Drive in Southport, Merseyside and one child was rushed to hospital with a head injury.

Pleasureland claimed that all other rides were working normally but had to be stopped and reset as a result of the fault with The Rocket coaster.

But Michael said he's now waiting for a £72 refund after telling staff the rides were unsafe – claiming he watched two more people evacuated from the Log Flume.

Michael added: "I said to my son 'Do you want to go on the carousel swings for a bit?', but the guy said 'Sorry mate, it's stopped working. It's got technical issues'.

"We looked up and couldn't believe it, the Log Flume was stuck and a member of staff was walking two people down the wooden ramp down the side.

"I saw a member of staff in a shirt and tie walk past and I said 'Excuse me mate, you can have these wristbands back we want a refund – three rides in two hours have all failed, I'm not taking a chance and going on any of your rides'."

Among the rescued passengers, 17 were given precautionary checks by paramedics.

Merseyside Fire and Rescue said the ride was to be isolated while a full inspection was carried out, which Pleasureland said it was still conducting today (Sunday).

A spokesperson for Pleasureland said: "We are sorry for the distress caused to passengers on one of our coasters yesterday. Our immediate priority was looking after everyone’s safe removal from the ride.

"All routine maintenance checks had been carried out, as they are on all rides each morning, before the ride went into commission.

"The ride did exactly what its safety settings are programmed to do and stopped on detecting a fault."