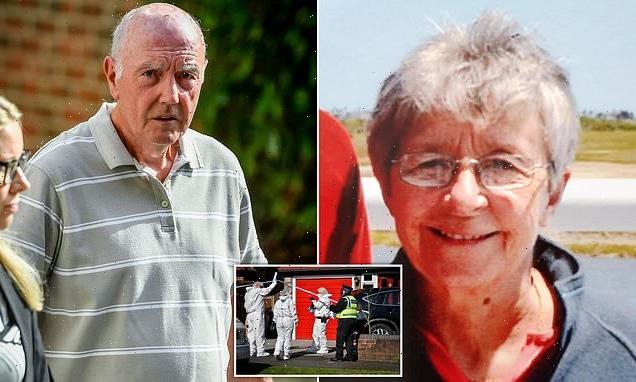 Pensioner, 73, who cut his terminally-ill wife’s throat in suicide pact is cleared of murder after she asked him to take her life, ‘when things get bad for me’

A pensioner who cut his wife’s throat in a suicide pact has been cleared of her murder after telling a jury he killed his terminally-ill partner of 40 years in an ‘act of love.’

Graham Mansfield, 73, was instead found guilty of manslaughter today after he admitted to killing cancer-stricken Dyanne Mansfield, 71, just months after she asked him to take her life ‘when things get bad for me’.

The retired airport baggage handler told Manchester Crown Court they were the ‘saddest words he had ever heard’, but that he agreed to his wife’s request as long as he could kill himself too.

A jury of 10 men and two women took 90 minutes to find Mansfield not guilty of murder but guilty of manslaughter.

On the morning of March 24 last year, he was found lying in a pool of blood at the couple’s home in Hale, Greater Manchester, while the body of Mrs Mansfield was slumped in a chair at the bottom of their garden.

Police and paramedics attended the semi-detached property in Canterbury Road after Mansfield dialled 999 and told the operator he had killed his wife of 40 years at 9pm the previous day before trying to kill himself. 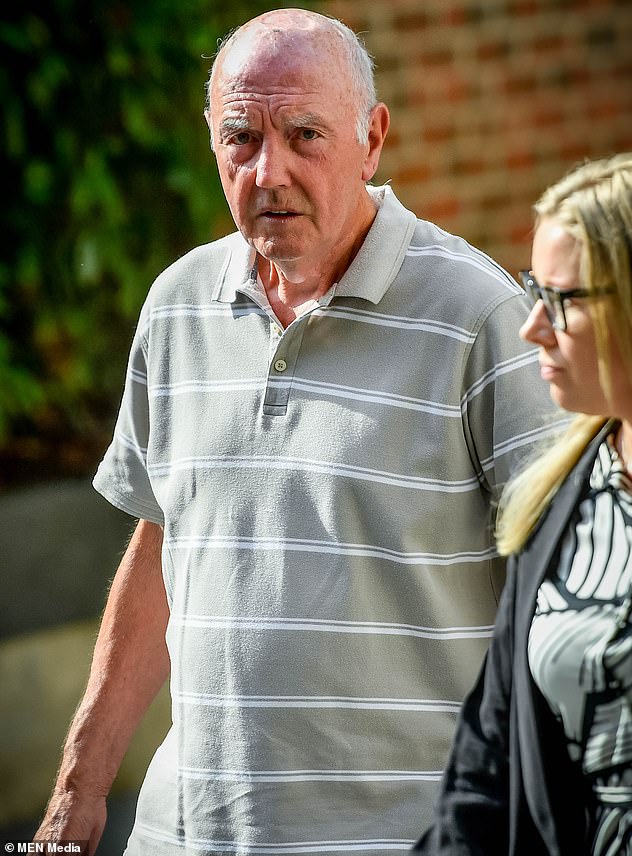 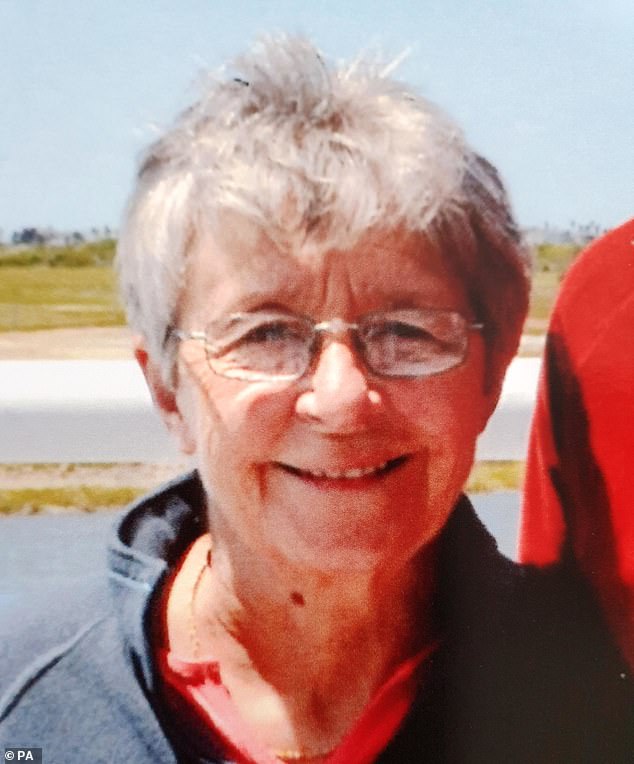 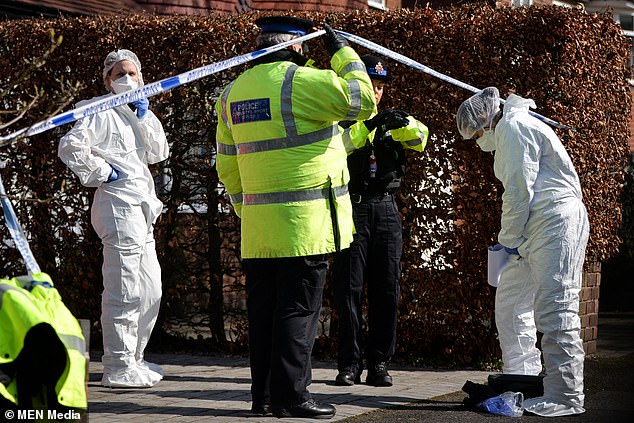 The court was told two notes to loved ones were found at the house after Mrs Mansfield died. Pictured: Police investigators outside the Mansfield’s home in Hale in March last year

Mr Justice Goose said sentencing of the ‘unusual case’ would take place at 3pm on Thursday.

Mrs Mansfield had bled heavily from a 6.3in (16cm) ‘gaping incised wound’ and her windpipe had been severed.

Three knives and a lump hammer were found near her body.

Also discovered nearby were two bricks on top of a plastic wallet containing a note written by the defendant for the police.

‘We have decided to take our own lives’, it said, giving instructions on where to find his house keys and how to contact his sister, the court heard.

Another note written by Mansfield, addressed to his family, was found in an envelope in the house.

It read: ‘We are sorry to burden you with this but there is no other way. We made a pact that when it got too bad for Dyanne we would end it.

‘I couldn’t bear to live without Dyanne and as the months progressed and as things got worse, it only reinforced our decision that the time has arrived. We hope you all understand.

‘Don’t get too upset. We have had a wonderful and happy life together.’

Neither note was signed by Mrs Mansfield, the court heard.

Mansfield was arrested at the scene on suspicion of murder and later underwent surgery for wounds to his neck and both wrists. 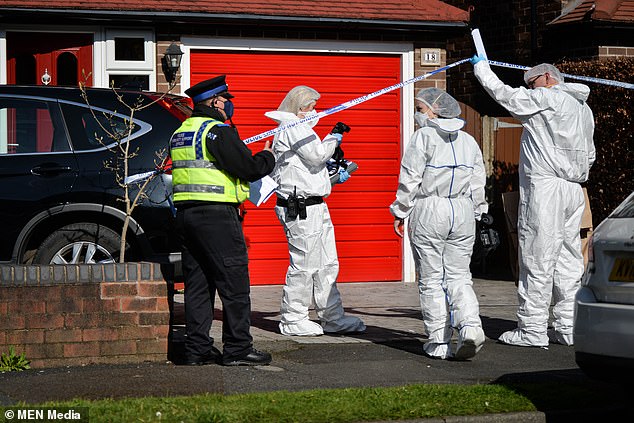 Police say Mrs Mansfield’s body was found in the garden at their home in Hale, Greater Manchester. Pictured: Police and forensics officers outside the couple’s house in March 2021

Police went on to speak to the couple’s family, friends and neighbours, who spoke favourably about the defendant and his ‘unswerving devotion’ to his wife.

Some even expressed no surprise at the suggestion that he had killed her as part of a suicide pact, jurors heard.

Mansfield, who had been on bail, had denied murder. He also pleaded not guilty to an alternative count of manslaughter on the grounds that his actions were ‘undertaken through duress of circumstances’.

Summing up the case, the judge told the jury that if Mansfield was to be cleared of murder they would have to be satisfied on the balance of probabilities that there was a suicide pact and he made a genuine attempt to kill himself.

He added that they may think his intentions were motivated by compassion for his wife, who was in pain, but acting through duress of circumstances did not make it lawful ‘however sympathetic you may feel about it’.

The judge said it was not the Crown’s case that there was no suicide pact but instead it was to ask the jury to consider all the evidence and ask whether it had been proved.

If you are struggling with depression or suicidal thoughts, you can contact The Samaritans helpline 24/7 on 116 123 for help and support.

‘I can’t live without you’: Graham Mansfield’s words to his wife of 40 years as they ‘agreed to take part in a suicide pact’ 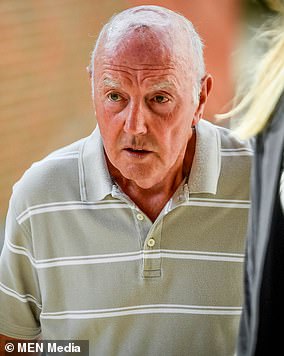 Graham Mansfield, 73, was found lying in a pool of blood in his kitchen on the morning of March 24 last year, while the body of his wife, Dyanne, 71, was slumped in a chair at the bottom of their back garden.

Mansfield told a 999 call operator he had slit the throat of his wife of 40 years at about 9pm the previous night at their home in Canterbury Road, Hale, Greater Manchester, and then cut his own throat.

He was arrested for murder but was today cleared of the charge by a jury, who instead found him guilty of manslaughter.

Giving evidence at trial, he said the couple married in Las Vegas in September 1980.

He said: ‘It was wonderful. The best thing that had happened to me. You don’t want to speak for someone else, Dyanne is not here, but she felt that way.

‘We were very fortunate. We both liked doing the same things – cycling, gardening, walking, playing badminton.’

He said his wife, a retired import/export clerk, was diagnosed with bladder cancer in 1999 which led to the removal of a kidney in 2004.

Years of uninterrupted good health followed, he said, as they later enjoyed an active retirement together.

He said 2020 was the ‘start of another fantastic year’ with three holidays booked and a 40th wedding anniversary trip planned to the United States. 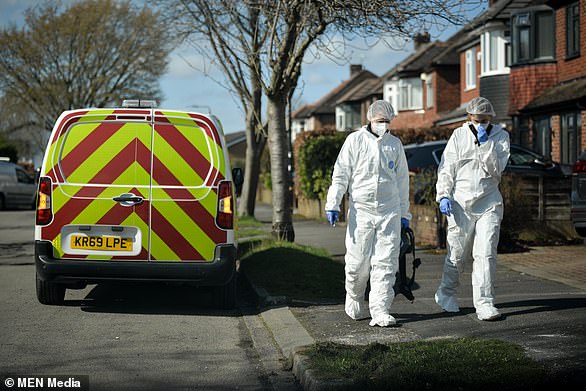 But ahead of the Covid-19 lockdown his wife developed a ‘tickly cough’.

In September that year, a doctor told her a scan had showed she had lung cancer and it had spread to her lymph nodes.

Mansfield said: ‘That was basically when our nightmare began.’

A week later they were told the cancer had reached Stage 4.

He said: ‘We knew there was no Stage 5. There were tears in our eyes. I was inconsolable.’

Mansfield said the couple were ‘shell-shocked’ when they were told in October that she had two years at most to live.

He told the court: ‘Dyanne said to me ‘Graham, this is the best I am ever going to be now. When things get bad for me, will you kill me?’

‘It was the saddest words I had ever heard.I said ‘Dyanne, I will. On one condition. That I go with you’.

‘She said ‘there is nothing wrong with you, there is no reason’. I said ‘Dyanne, I can’t live without you’.’