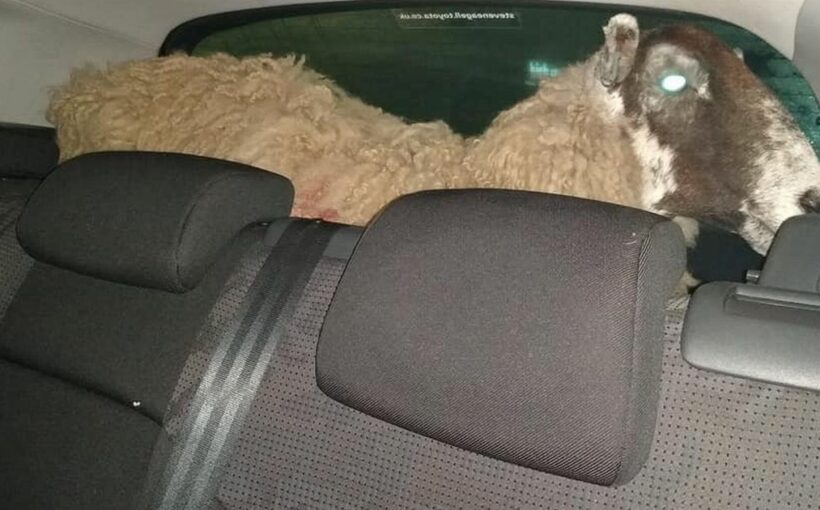 A car stopped by police for running through a red light had a sheep in the boot of the vehicle, Leicestershire Police and Rutland Crime team said in a Facebook post.

Police pulled over a blue Peugeot in Loughborough for running a red light on Friday February 2.

The driver obeyed officers who got out of their car to speak to the owner, only to find an unexpected passenger in the boot.

Shocked cops discovered an ewe stood up in the rear of the vehicle, which was later confirmed to be in good health.

According to the Facebook post, the driver told police the sheep had been purchased legitimately but an investigation is now ongoing to discover where the animal came from.

The force said: "The vehicle ran a red light and so drew officers attention to it.

"The car was seized as it had no MOT or insurance and the ewe has been safely recovered and is in good health.

"The driver and passenger will be spoken to in the near future in a police interview.

"Enquiries are ongoing to locate the owner to identify where it's come from, despite an account from those involved claiming it was legitimately purchased."

It added that until the sheep's previous owner is found, suspects cannot be charged with an offence.

Acknowledging the "emotive subject" of the investigation, Leicestershire Police said it would be speaking to DEFRA, the Department of Environment, Food and Rural affairs about the case.

Police also pleaded with sheep owners to check whether the animal belongs to them, adding that anybody who believes they own the animal will need to "prove ownership with relevant numbers."

The Facebook post said: "Until such time as an owner is identified – we cannot 'charge' the suspects with an offence – despite a lot of comments suggesting that we do so.

"We know this is an emotive subject and it's one that we will be properly addressed as the investigation unfolds.

"We will be speaking to DEFRA next week using the ear tag numbers.

"If you think she belongs to you – please get in touch quoting incident 629 of today. You'll need to prove ownership with relevant numbers."