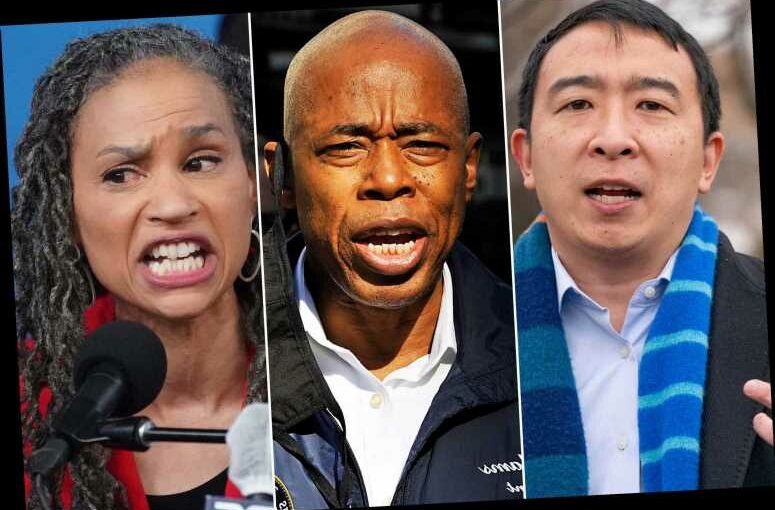 The June 22 Democratic primary race for mayor is still “wide open” — with half of voters still undecided, a new poll released Wednesday reveals.

Entrepreneur and former presidential candidate Andrew Yang is in the lead, but with support of just 16 percent of likely Democratic voters, the survey by Fontas Advisors/Core Decision Analytics found.

But the biggest group is the 50 percent of voters who are still shopping for a candidate with less than three months to go.

“This race is wide open,” said George Fontas, whose lobbying firm paid for the poll.

Pollster Adam Rosenblatt, president of DC-based Core Decision Analytics, said, “Though the candidates may have been campaigning for several months, our survey shows that voters are only now starting to tune in to the mayor’s race.

“With less than one hundred days until the Democratic primary, the majority of likely voters are undecided, unfamiliar with most candidates, and also largely unaware of the new ranked choice process.”

The second mayoral primary survey done by Fontas/Core markedly differs from the one they did in January, when they just interviewed voters online

In the earlier survey, the pollster provided a brief description who each of the candidates were and the support for them was higher. Yang garnered 28 percent; Adams, 17 percent; and Stringer, 13 percent and the number of undecideds was much lower, just 19 percent.

In the latest survey voters were just given the names of candidates with no description.

The number of undecided voters jumped to 50 percent, and while Yang and Adams were still the front runners, their level of support dropped.

Yang benefits from having the strongest name recognition, with 85 percent of primary voters saying they have heard of him, followed by 64 percent for Stringer and 62 percent for Adams.

Aside from making mostly virtual appearances in forums during the coronavirus pandemic, TV advertising appears to have helped raise the profiles of Shaun Donovan, who was budget director and housing secretary to former President Barack Obama, and financier Ray McGiure.

Donovan’s name ID shot up from 33 percent to 44 percent since January. McGuire’s name ID surged from 25 to 38 percent.

Maya Wiley’s name-recognition also jumped from 33 percent to 42 percent. She won the endorsement of one of New York’s most powerful unions, SEIU Local 1199, which represents health care workers.

Other key findings from the poll:

The Fontas Advisors/Core Decision Analytics poll surveyed 800 Democrats from March 15-18 and has a plus or minus 3.46 percentage point margin of error.