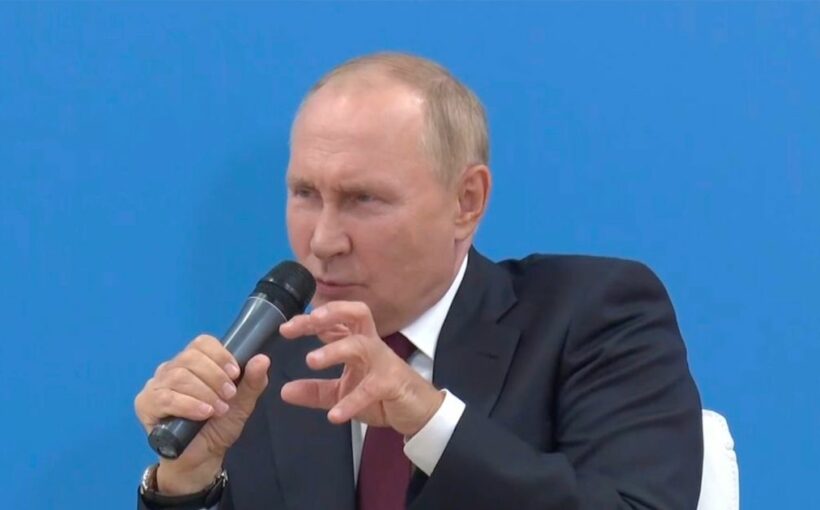 Vladimir Putin has left a group of gifted Russian schoolchildren baffled after he gave a speech to them that included a bizarre joke about a “rubber bum”.

The paranoid Russian leader had insisted that all of the kids attending the event were tested for Covid-19, and then quarantined for two weeks, to avoid any risk of infection.

The pupils were then subjected to a rambling, propaganda-tinged speech about Ukraine’s relationship to Russia in which Putin spoke warmly about his time as a KGB agent.

He told the children that his old boss “did illegal work overseas” for many years, and despite the dangerous missions he undertook “did not expect gratitude from the Motherland.”

Stressing the importance of hard work, he said “You need to be motivated to reach your goal and, of course, work hard. Working hard is a talent in itself."

Giggling to himself, Putin continued: “It's not just, excuse me, a rubber bum. It is a talent to force oneself to work, and to be able to do it productively.”

The audience of nine to 12-year-olds remained silent after Putin delivered his strange "joke" and Russian social media users were also unsure how to react.

One commenter said: “I am confused. I could at least understand his previous ‘jokes’.”

Another demanded: "What's behind the weird joke from our dictator?" Journalist Elena Rykovtseva posted: “God forbid – is this what he’s flogging to school kids at the ‘Speak about the Important’ session in Kaliningrad? What kind of mess is in his head? Somebody cure this president!”

Another said: “What was it for? What did he mean by that? What does the rubber bum have to do with the subject under discussion? Someone please explain.”

One guess is that he muddled his Soviet history, and was alluding to a nickname given to notorious Soviet foreign minister Vyacheslav Molotov, a Bolshevik monster who personally signed off more mass execution lists than Stalin.

During Stalin’s reign of terror, Molotov was known as “Stone Bum” for his ability to work at his desk for 20 hours non stop.

Meanwhile, Putin admitted about himself: "I can’t say I am the most disciplined.

"It’s clear I’ve got to work on myself. Discipline is important to succeed, but discipline alone isn’t enough."