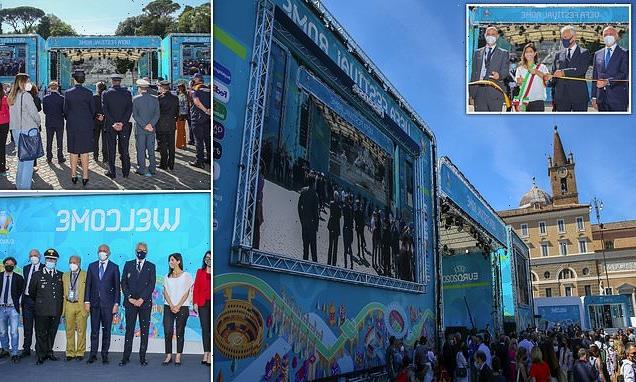 The world’s first post-Covid football tournament kicks off: 18,000 fans will watch Italy v Turkey in Rome tonight as 11 countries prepare to host games before the final at Wembley

Italy is gearing up to host the first game of the Euros tonight as the national side take on Turkey at the Stadio Olimpico in Rome – kicking off the world’s first post-Covid international football tournament.

Strict Covid capacity limits mean just 18,000 fans will be allowed into the arena – a drastic change from previous years but which is likely to feel relatively normal after much of Europe spent the last 18 months in lockdowns with many stadiums closed.

The tournament – which was delayed from last year due to the pandemic but is still called Euro 2020 – will then see games played across 11 stadiums in 11 nations between now and July 11, when the final will take place at Wembley.

All host nations with the exception of Hungary have put capacity limits in place on stadiums in an attempt to stop the spread of Covid, though Boris Johnson has said he hopes to have Wembley at capacity for the final.

In preparation for a month of football, socially-distanced fan zones have started popping up in host cities – with staff pictured putting the finishing touches on big-screen venues in Rome and Glasgow today. 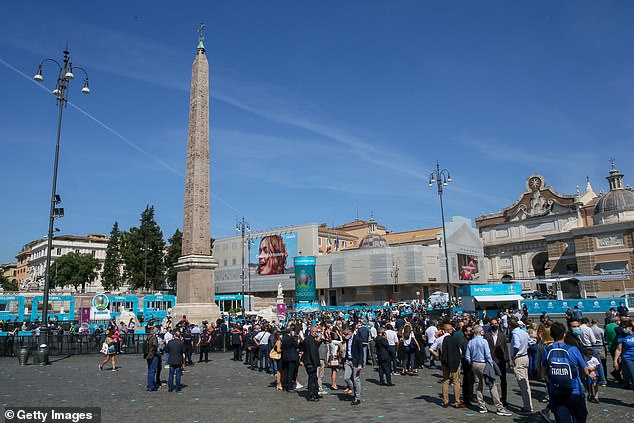 Rome is preparing to host the first game of the Euros tonight as the Italian national team take on Turkey (pictured, the fan zone in Rome) 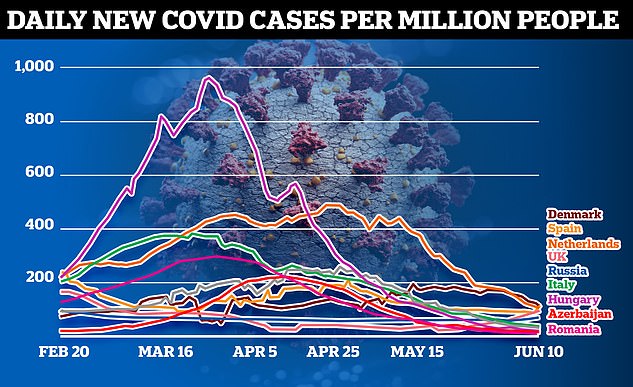 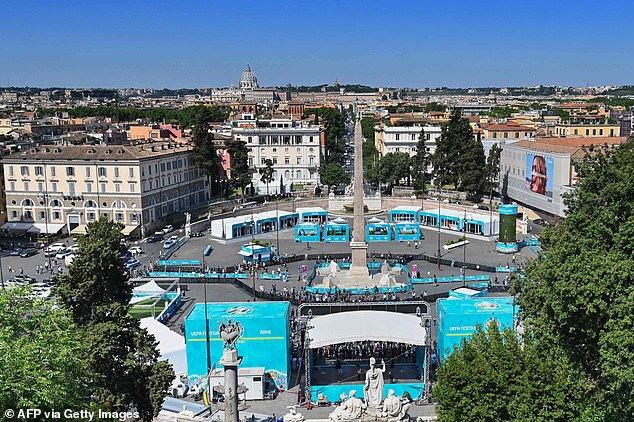 11 cities in 11 countries will host matches that will continue until July 11, when the final takes place at Wembley (pictured, Rome’s fan zone) 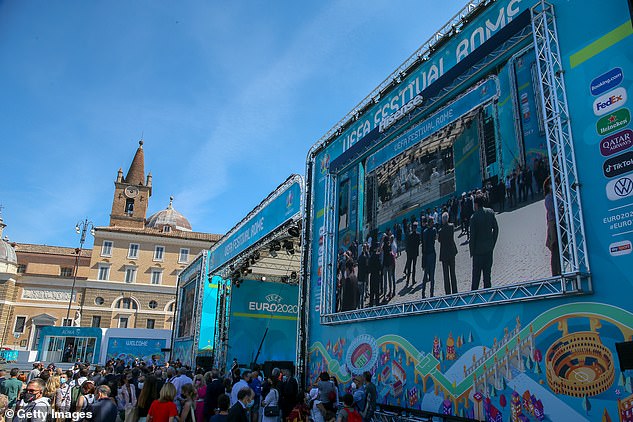 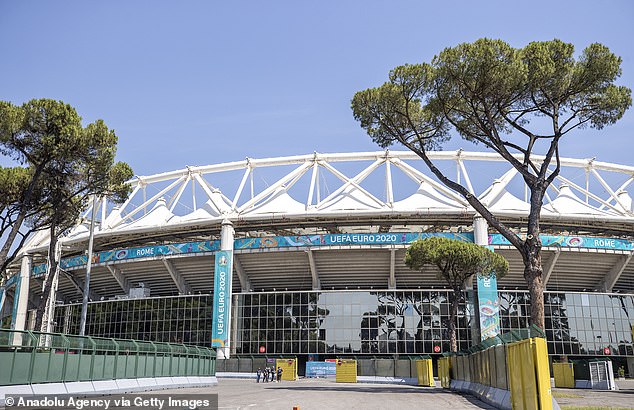 The Stadio Olimpico in Rome will welcome 18,000 fans to watch the Italian team play Turkey tonight in the first game of the delayed Euro 2020 tournament

London will play host to the most games, having secured the rights to the semi-finals and finals due to Wembley being the largest venue.

But the English FA managed to snaffle up some extra fixtures after Dublin pulled out as a host city last month.

UEFA has insisted that all hosts allow fans into stadiums for matches – something the Irish government said it will not be ready to do.

Wembley will therefore play host to a total of eight matches, including all of England’s group stage games in addition to two round of 16 matches, then both semi finals and the final.

St-Petersburg, in Russia, snapped up the rest of Dublin’s dropped matches and will play host to a total of seven games.

All other hosts – which include Spain, Germany, the Netherlands, Denmark, Romania and Azerbaijan – will then host four games each.

But Spain’s matches will take place in Seville instead of Bilbao after a last-minute change due to local Covid infection rates.

The games at Wembley will be used by the UK government to test out vaccine passports for the first time, with fans required to show proof of vaccination or a negative test before being allowed in.

While France are strong favourites to lift the title, having comfortably won the World Cup final 4-2 against Croatia in 2018, tonight’s hosts Italy are being tipped as dark horses despite under-performing at recent tournaments.

Managed by former Manchester City skipper Roberto Mancini, the team won 10 out of 10 of their qualifying matches despite having few big-name players.

Meanwhile Gareth Southgate has set his sights on a semi final finish at minimum for England, but they will face two tough games to get their campaign up and running.

First up is Croatia, the team which dumped Southgate’s men out of the World Cup at the semi final stage in 2018, followed by bitter rivals Scotland.

An easier game against the Czech Republic rounds out the group stages, before a Round of 16 where opponents could include the likes of Poland, Sweden, Portugal, and age-old foes Germany.

England’s opening game alone is expected to boost pint sales in pubs by at least £3 million – though industry bosses have warned that current Covid restrictions will cost them millions more in lost earnings.

Scotland will begin their tournament by facing the Czech Republic on Monday, before playing the Auld enemy at Wembley next Friday.

The highly-anticipated match is the first time England have played Scotland at a major tournament since 1996 and is expected to fill pubs across the land. 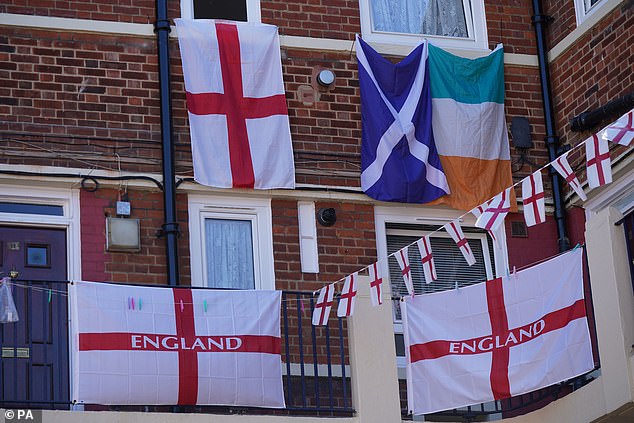 English, Scottish and Irish flags are seen hanging on a housing estate in London ahead of the opening game of the Euros tonight 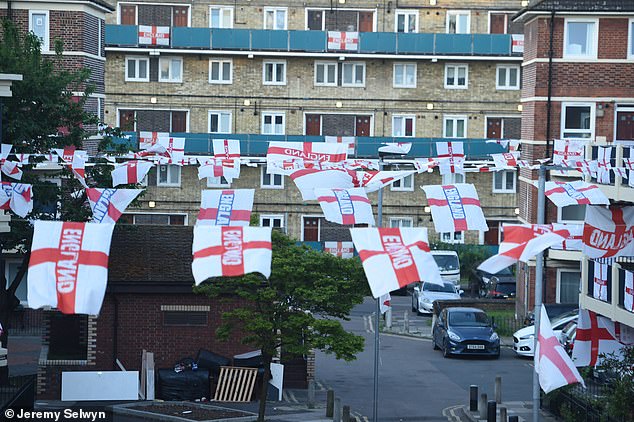 England flags adorn a housing estate in London, with the city due to play host to eight Euros fixtures – the most of any host city

Euros 2021: Where are the games being played, and when?