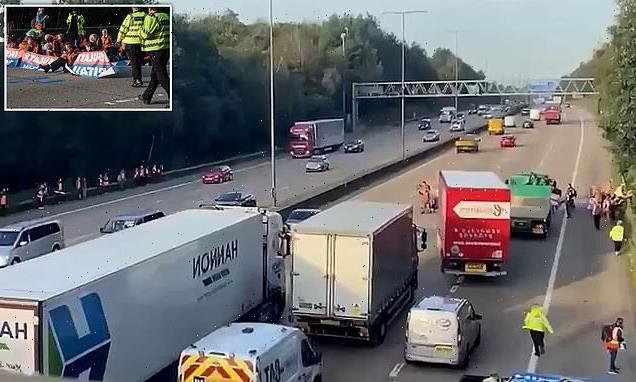 A second police force has asked motorists whose lives were seriously impacted by Insulate Britain to come forward.

Surrey Police are building a case against the protesters who targeted a number of junctions of the M25 and M3 on September 13, 15, 17 and 21.

It will help the Crown Prosecution Service – which the force is in consistent dialogue with – to prove the impact the activists had on people’s everyday lives.

It comes after Essex Police said they wanted to speak to people who could not attend medical appointments, planned work or missed anything significant due to the motorway chaos.

Surrey Police are building a case against the protesters who targeted a number of junctions of the M25 and M3 on September 13, 15, 17 and 21

It comes after Essex Police said they wanted to speak to people who could not attend medical appointments, planned work or missed anything significant due to the motorway chaos

The most recent activity in Surrey resulted in 38 people being arrested after it was reported that protesters were walking down the embankment to the hard shoulder between J9 and 10 on the M25 at 7.57am on September 21.

Officers were at the scene within three minutes after the protesters made their way onto both the anti-clockwise and clockwise carriageways of the motorway.

Earlier protests which took place at J6 and 14 of the M25 on September 13, J8 and 10 on September 15, J9 of the M25 and J1 of the M3 on September 17, resulted in far greater disruption, with many motorists held up for several hours and diversions put in place.

During the four days of activity on Surrey’s roads, the protesters were arrested on suspicion of a variety of offences, including criminal damage, causing danger to road users, wilful obstruction of the highway and causing a public nuisance.

More than 30 protesters were seen running into flowing traffic near Woking. There were groups on both sides of the eight lane motorway

Temporary Detective Sergeant Steven Cassidy, who is part of the investigation team, said: ‘We are keen to be able to present the fullest evidential picture we can to the Crown Prosecution Service in order that we can reflect the seriousness of the situation and seek to prosecute the most appropriate offences.

‘Therefore, we are appealing for help from anyone who suffered a serious personal impact as a result of the disruption.

‘However, please only come forward if you have suffered serious impact.

‘You also need to be willing to provide us with a statement and then go to court to give your evidence for any trials that may follow – this could mean more than one visit to court as we may have a situation where we are running a number of trials.

‘I must reiterate that the impact needs to be serious – it cannot just be that it was inconvenient.’

He added: ‘My team is continuing to work tirelessly to collect evidence to ensure anyone breaking the law is brought to justice.

‘This has included sifting through numerous social media posts to find those heart-breaking stories of people who were seriously affected by these protests.

‘If that was you, and you have not already come forward, please do so – we would really like to hear from you.’