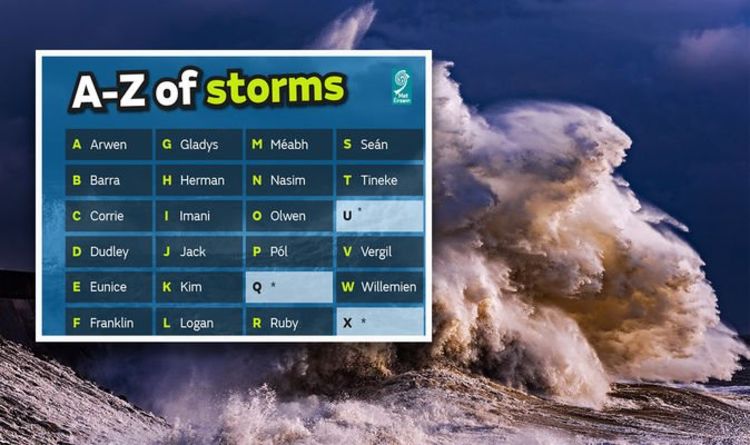 BBC Weather: Drastic change in conditions as weekend to be hot

Every year, the Met Office decides the names for the 2021/2022 storm season, along with the meteorological services in Ireland and the Netherlands. Storms are named to help make the public aware of severe weather before it hits. The last UK storm to be named was Storm Evert in late July, which brought severe winds and weather to several areas, particularly South West England.

The Met Office works with Met Éireann and KNMI, the national weather forecasting service in the Netherlands, to agree on the storm names every year.

More than 10,000 suggestions were submitted to the Met Office by the public in recent months for the 2021/2022 season.

The names have now been announced, and the first named storm of the 2021/2022 season will be named Arwen.

The name is thought to be of Welsh origin, and it was popularised by JRR Tolkien’s Lord Of The Rings books.

Kim, Logan, Ruby and Dudley are just some of the names put forward by the UK public and selected by the Met Office for a number of sweet reasons.

A Met Office spokesman said Kim was nominated in recognition of a “whirlwind” relative and a self-confessed weather watcher.

The name Logan, a name of Scottish origin, was nominated by several parents and grandparents, including a mention of a grandson who “runs through the house like a tornado” and another who is “as quick as lightning” when playing as a goalkeeper.

The name Ruby was selected after being nominated by a pet owner whose cat “comes in and acts like a storm” and a parent whose daughter “leaves a trail of destruction” when she enters the house.

The name Dudley topped a poll on Twitter for the name starting with D, after being submitted by a couple who will share the last name of Dudley when they get married in 2022.

The couple wrote that they “find it comical to name a storm for us getting married.”

Names that start with Q, U, X, Y and Z are not included in the storm names list, to align with international storm naming conventions.

Will Lang, Head of the National Severe Weather Warning Service at the Met Office, said storm names “ensures clarity for the public when they need it most.”

Mr Lang said: “This is now the seventh year of us naming storms with our European partners and we look forward to continuing to work together with them to raise awareness around the impacts of severe weather in order to help keep people from all nations safe.

“We’re all aware of some of the severe weather that has been witnessed across Europe and globally in recent months and we work to use any tool at our disposal to ensure the public is informed of potential risks, and naming storms is just one way we do that.

“We know naming storms helps raise awareness of the impacts of severe weather and ensures clarity for the public when they need it most.”