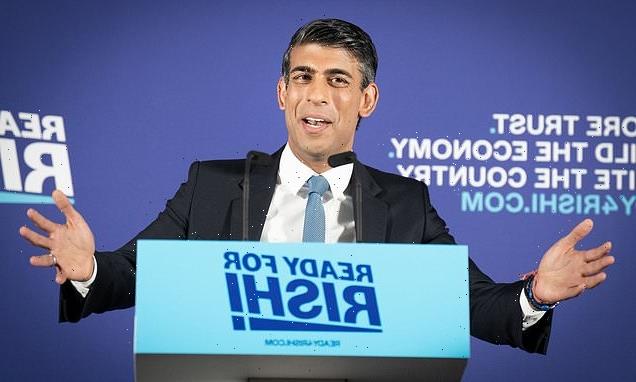 Bookies’ favourite only one-in-nine could pick out in a crowd: JASON GROVES analyses the way ahead in the Tory leadership race

Rishi Sunak failed to deliver a knockout blow last night, leaving the race to succeed Boris Johnson wide open. The former chancellor topped the first-round ballot of Tory MPs but did not manage to establish the kind of unassailable early lead seen when Mr Johnson seized the crown in 2019.

Mr Sunak has been the hot favourite to win the backing of Tory MPs. But in a secret ballot yesterday he got a slightly underwhelming 88 votes, ahead of Penny Mordaunt on 67 and Liz Truss on 50.

His tally amounts to just under a quarter of Tory MPs and will alarm those on his team hoping that he would be out of sight after the first round. 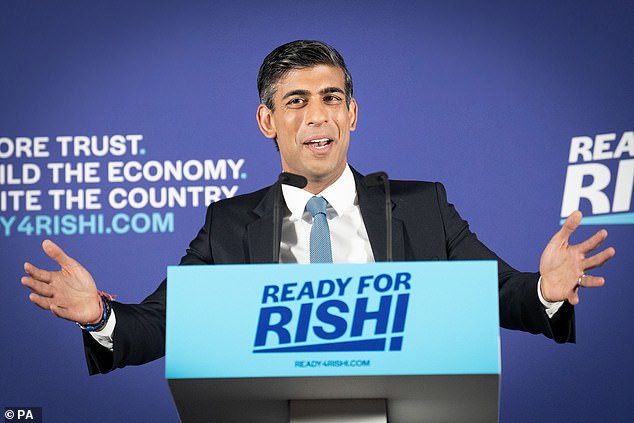 Rishi Sunak (pictured) has been the hot favourite to win the backing of Tory MPs. But in a secret ballot yesterday he got a slightly underwhelming 88 votes, ahead of Penny Mordaunt on 67 and Liz Truss on 50

By contrast, Mr Johnson crushed his opponents in the first round in 2019, taking 114 votes to Jeremy Hunt’s 43. Tory MPs with long memories were last night recalling the 2001 leadership contest when Michael Portillo took a narrow first-round lead but ended up being dumped out in subsequent rounds after his campaign stalled.

Mr Sunak’s team were last night putting a brave face on things, pointing out that it was no mean achievement to secure a quarter of the vote in a crowded field of eight candidates.

He is still well-placed to make the final two candidates who will then go forward to a vote by Conservative Party activists next month.

But he cannot yet be certain, and may need to be bolder in what has so far been a safety-first campaign.

Last night’s result left it all to play for, with at least four candidates still in with a good chance of making the final round.

The other key surprise was the success of Miss Mordaunt, who has been a relatively low-key figure at Westminster in recent years but now looks well-placed to challenge for the Tory crown.

And her strong second place among Tory MPs suggests that she may have what her supporters dub the ‘Mormentum’ to make the final ballot.

This claim was underlined yesterday when the popular Tory veteran Sir Mike Penning quit his post as party vice-chairman to campaign for her. Last night, bookmakers made her favourite to be prime minister, despite a new poll finding only one in nine people could pick her out in a crowd.

Miss Mordaunt has had little scrutiny so far. That is about to change as rival camps move to highlight her weaknesses, particularly her reputation as a ‘woke warrior’. 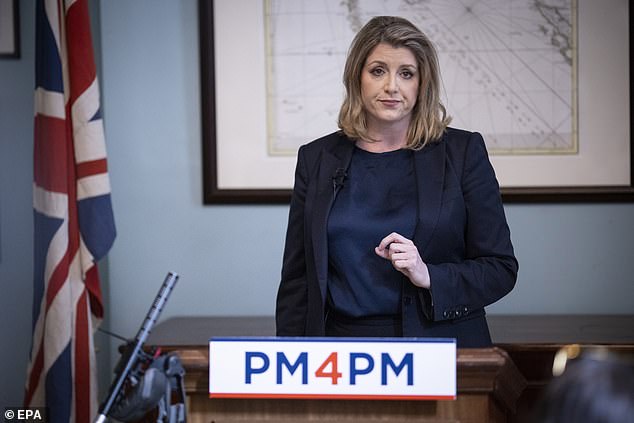 The other key surprise was the success of Penny Mordaunt (pictured), who has been a relatively low-key figure at Westminster in recent years but now looks well-placed to challenge for the Tory crown

Miss Truss also polled strongly with 50 votes. But her third-placed position will highlight frustration within the Tory Right that a split in their vote risks squeezing them out of the contest.

Fellow Right-wingers Kemi Badenoch and Suella Braverman polled 40 votes and 32 respectively, suggesting that a united candidate of the Right would be almost certain to face the final two.

The split suggests that Priti Patel was right to graciously step aside rather than splinter the Right vote further.

But it also shows that if the Right wants to be certain of putting a candidate before Tory activists next month it needs to end the infighting and choose a champion.

If two of the Right candidates are still standing when the field is whittled down to the last four then there is a very strong chance that neither of them will make the final ballot.

Yesterday, the European Research Group of MPs split its support between Miss Truss and Mrs Braverman to keep them both in the race. It is a strategy that is doomed to end in failure if it continues.

Both women also face a real threat from Mrs Badenoch. The no-nonsense Equalities Minister, who enjoys the backing of Michael Gove, is attracting support from a broad range of MPs and could yet prove to be the wild card in the pack. 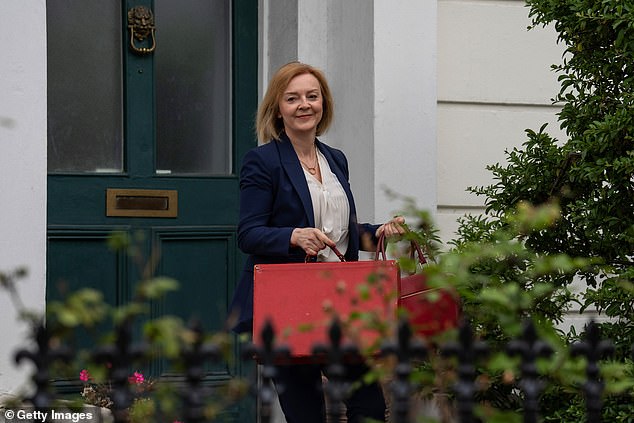 Liz Truss (pictured) polled strongly with 50 votes. But her third-placed position will highlight frustration within the Tory Right that a split in their vote risks squeezing them out

Attention will now focus on where the supporters of failed candidates Jeremy Hunt and Nadhim Zahawi will go in the second ballot today after they were knocked out.

For Mr Hunt, it was a campaign too far, with Mr Johnson’s supporters punishing him for his disloyalty.

A week ago Mr Zahawi had a chance to win, but killed his campaign at birth by first backing the Prime Minister to stay in office only to pull the rug from under him a few hours later.

Mr Hunt looked certain to back Miss Mordaunt, who was his running mate last time round, but late last night said he would join Mr Sunak’s supporters.

Mr Zahawi is being courted by surviving moderate Tom Tugendhat but may ultimately end up siding with Mr Sunak if he can cement his position as the Establishment choice.

As of this morning, Mr Sunak appears to be halfway there in his bid to make the final run-off. Miss Mordaunt has the momentum that is crucial in a short contest.

And the Tory Right has a big decision to make. Divided they will fail.