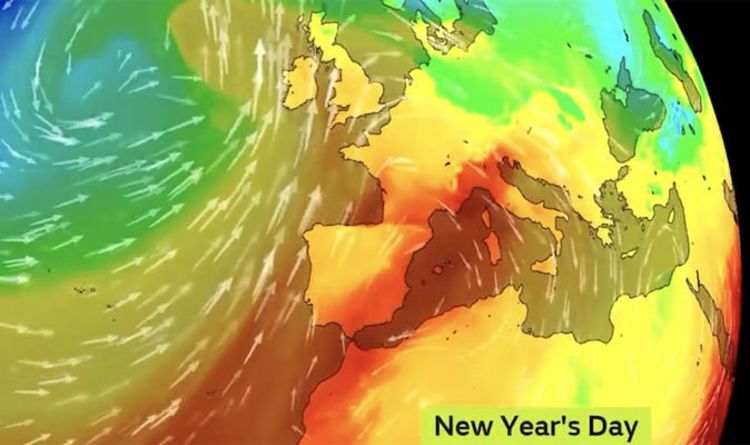 Britain is set for a rollercoaster week of weather, according to the latest Met Office forecast. Meteorologist Aidan McGivern said that the UK could experience its hottest New Year’s Day on record tomorrow. The country is also set for the warmest New Year’s Eve on record tonight as temperatures continue to climb across the UK.

However, Mr McGivern warned that a cold change on Monday will see temperatures drop back “towards average for the time of year”.

Northern parts of Scotland could even see wintry weather and snowfall on Monday and Tuesday.

He told Met Office viewers: “2022 will begin just as 2021 finishes, with remarkably mild air across the UK.

“There will be showers throughout this weekend but away from the showers, there is a decent chance of drier and brighter interludes, so certainly not a washout weekend.”

Mr McGivern continued: “As the clock strikes midnight, the wind is coming from a very mild direction so temperatures will be remarkably high for nighttime in late December, as high as 13C.

“2022 sails in on those very mild south-westerlies, coming up all the way from the Sub-Tropics.

“They do contain a lot of moisture so there will be plenty of cloud cover as we begin the new year but the rain will not last particularly long.

“It will turn increasingly windy on New Year’s Day, with coastal gales in the north and west and particularly strong winds towards Scotland.

“But those winds are again coming from that mild direction, so temperatures are widely in the double-figures. And if we beat 15.6C that would make it the warmest New Year’s Day on record.”

However, the senior Met Office presenter warned that a big weather change was set for Monday.

He explained: “As we end Sunday and go into Monday, there will be a start of a change in the weather.

“These colder, northerly winds arrive into Scotland and we will see a weather front arriving into northern Scotland on Monday.

“That will initially bring rain, but later in the day we could see wintry weather, and potentially some sleet and snow in the north ion Scotland.

“Temperatures will dip back into the single digits further north so we will be back to around average for the time of year.”

He suggested that “further wintry showers” are also expected on Tuesday.