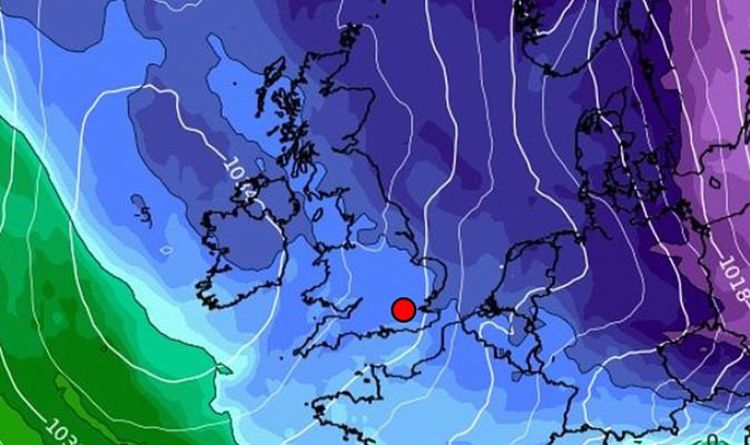 UK forecasters have noted the country has been experiencing a milder period compared to the average November, with highs of 14C across the south. But normalcy seems to be on the way as the latest WX Charts shows a cold front moving into the UK towards November 20, with a two-day stint during which thermometers are likely to dip below zero. Scotland will take the brunt of the front, with northeast areas turning a deeper blue compared to the west.

The meteorological graphics also show a 40 percent chance of snow for the north, with the possibility of snowflakes hitting northern England, East Anglia, Wales, and the south also growing.

Speaking to Express.co.uk, lead European forecaster Tyler Ros, AccuWeather’s senior meteorologist said: “The threat for snow between November 17-22 looks to be around normal for the time of the year, which is any accumulating snow is likely to occur in the higher elevations of northern England and Scotland.

“We do have to watch a cold snap that appears to move into eastern Europe early next week.

“If this bleeds westward towards the UK (with the core of the cold remaining in eastern Europe), then the temperatures will be near to slightly below normal during this stretch.

“This then would fire up some North Sea Sea Effect showers coming in from the east.

“If the hills are cold enough in northern England and in Scotland, these showers are more likely to be wintry.

“This is something that we are going to have to watch over the next few days.”

But before the cold stint takes over, BBC Weather forecaster Carol Kirkwood said Britons are set for more mild conditions over the coming weekend.

The BBC forecaster said the above-average conditions will persist through Friday, when lingering winds and cloud will slowly move away to give way to clearer skies.

“As we head into the evening and overnight, in comes the rain – heavy across Northern Ireland, and also Scotland.

“Gusty winds with exposure in the west, gusting as much as 40mph, possibly 50mph as it moves across Shetland. And we’ve got the tail end of a weather front, it’s all wrapped around this area of low pressure.

“And the tail end is bringing some lighter rain across England and also Wales.

“As we head through tomorrow, here is the low pressure, as as it moves across Scotland, the centre of it will mean there’s not going to be much wind, for the rest of us, it’s going to be a windy day.”

Ms Kirkwood added: “It’s still going to be quite windy in the east first thing during the course of Saturday but they will ease.

“For the outlook, it is going to be mainly dry. There will be a lot of cloud around at times, and any sunshine will be at a premium.”