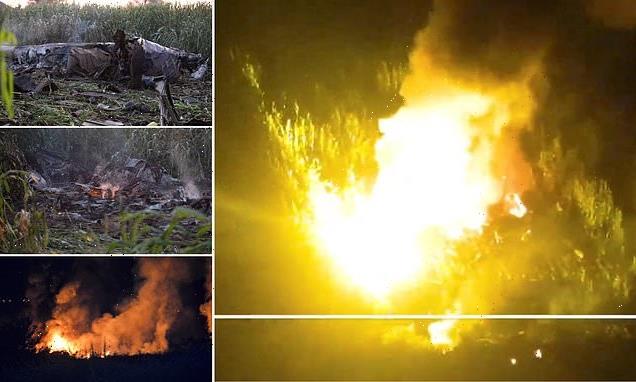 A Ukrainian cargo plane which crashed in northern Greece last night was carrying nearly a dozen tons of mortar shells and land mines to the Bangladeshi army.

The Antonov An-12 light aircraft had eight Ukrainian crew members, all of which were killed.

An official at cargo firm Meridian told Reuters: ‘Of course they didn’t survive this.’

Eyewitnesses filmed the fireball crash in the early hours today, with explosions continuing for two hours and the charred wreckage burning until morning.

Drone images from the scene showed debris from the bulking aircraft strewn in fields.

Serbia’s defense minister said the plane was carrying 11.5 tonnes of products made by its defense industry and the buyer was Bangladesh defense ministry.

Greek authorities could not provide any more information on the aircraft’s cargo. 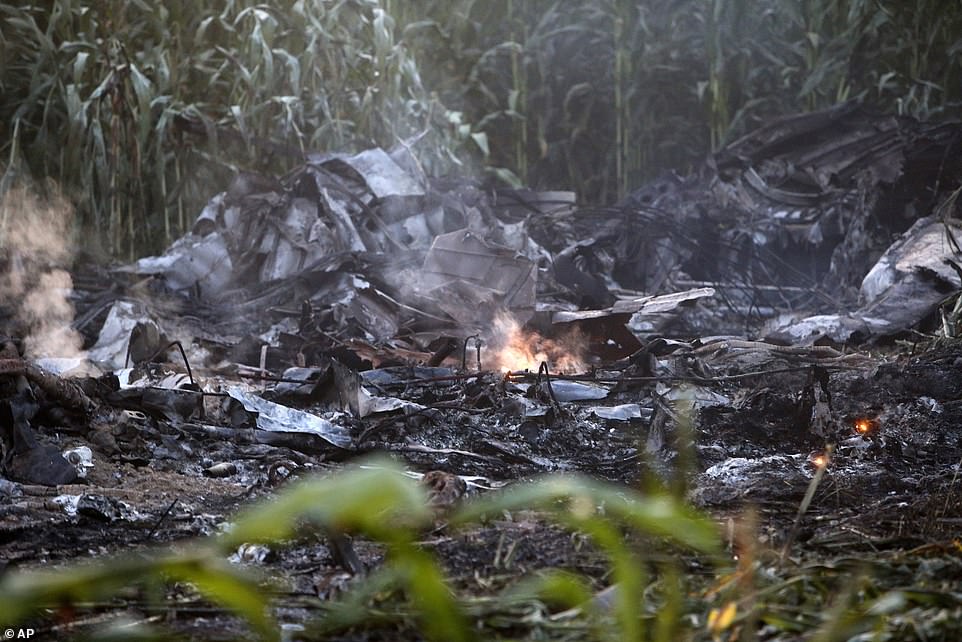 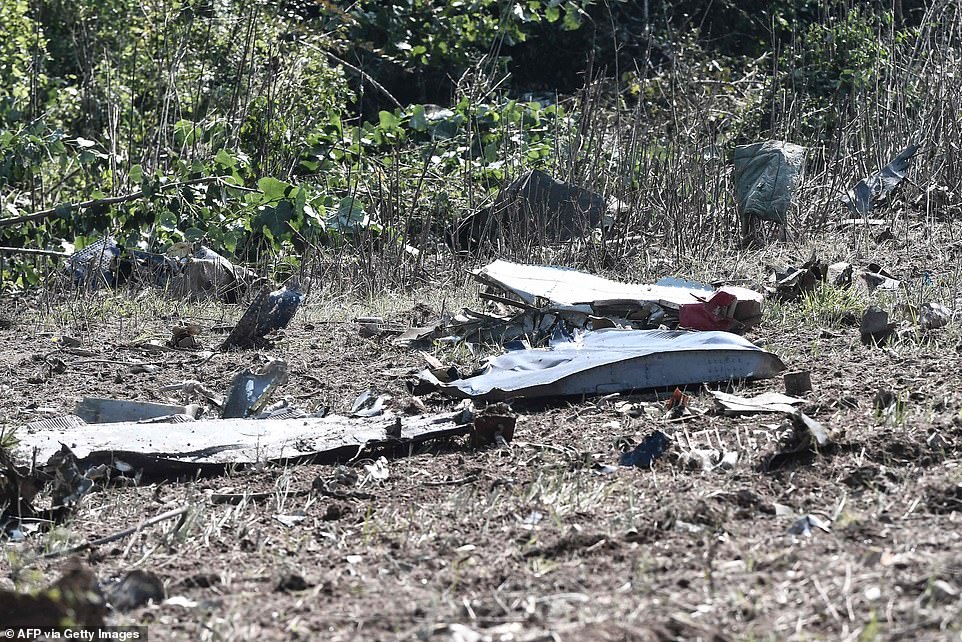 Images from today show hunks of metal scattered around the field, with crew members’ conditions still unknown. Ukrainian media has reportedly suggested all eight were killed 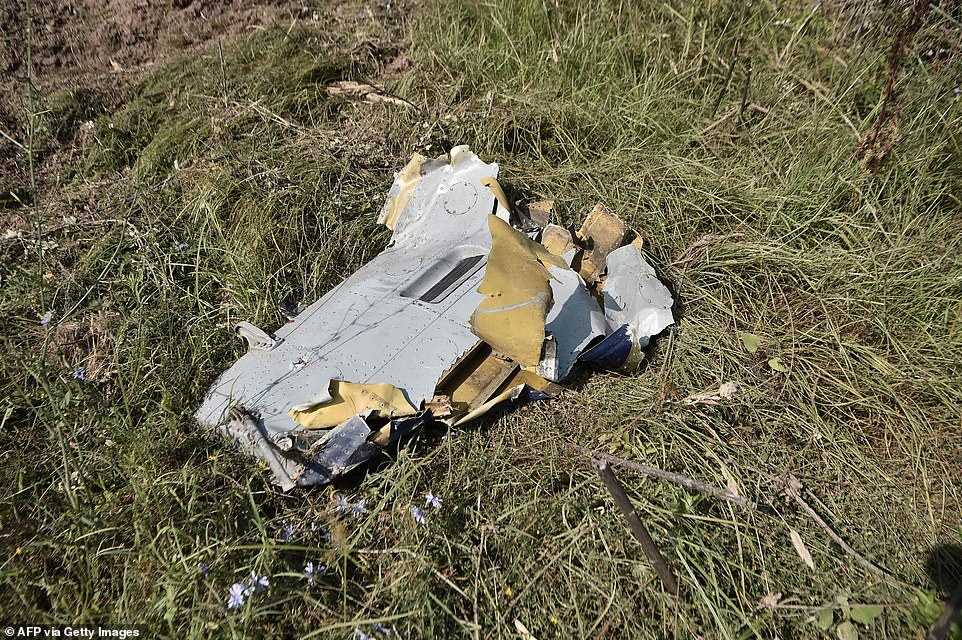 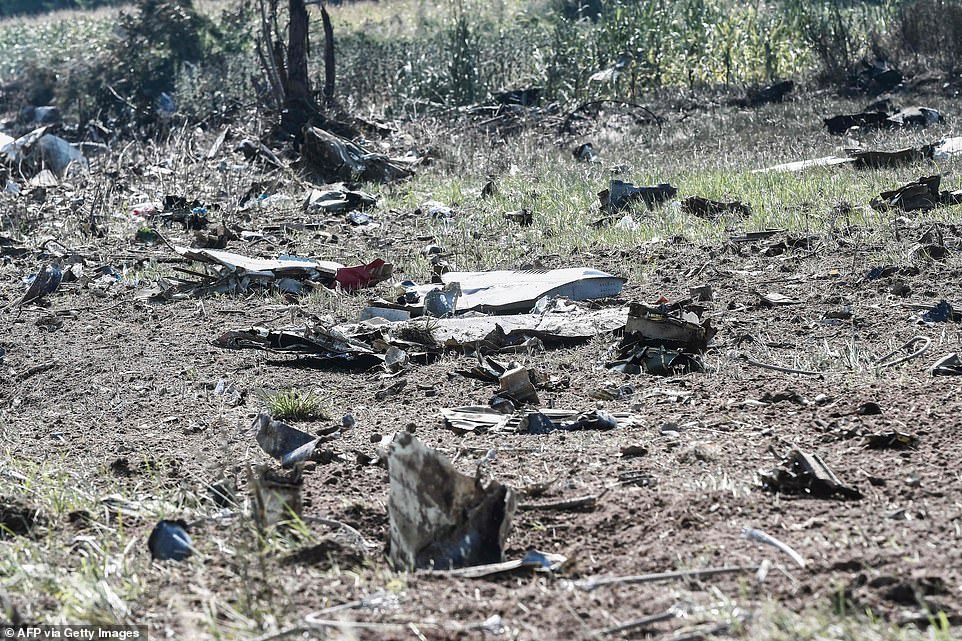 A special army unit arrived at the site to search for nuclear, biological and chemical substances

A special army unit arrived at the site to search for nuclear, biological and chemical substances at 1pm local time (10am GMT).

A lead firefighter told reporters that his crew ‘felt their lips burning’ at the site, with white dust floating in the air.

‘We don’t know what has been affecting us,’ fire brigade coordinator Marios Apostolidis said.

State TV ERT said that the signal of the aircraft was lost soon after the pilot requested an emergency landing from Greek aviation authorities due to an engine problem.

Amateur video footage showed the aircraft in flames descending fast before hitting the ground in what appeared to be an explosion. 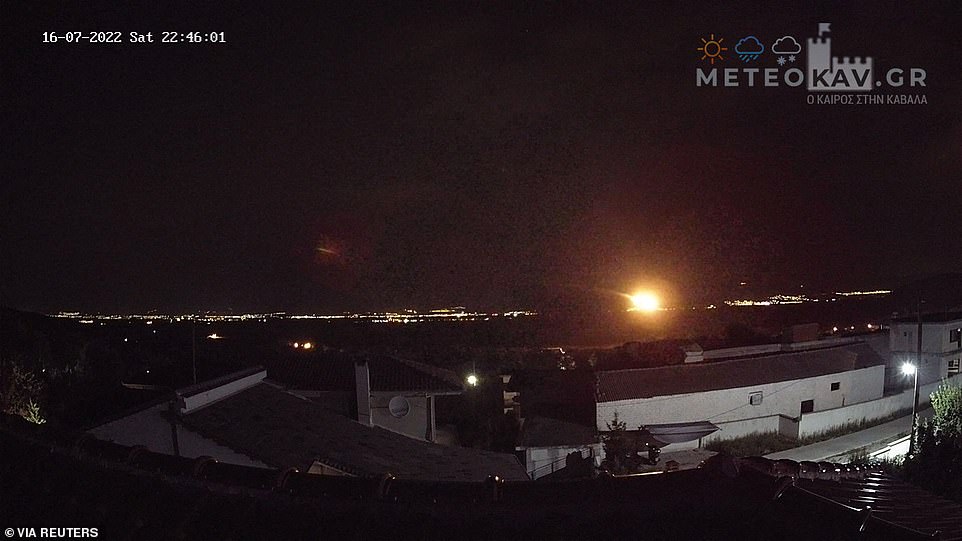 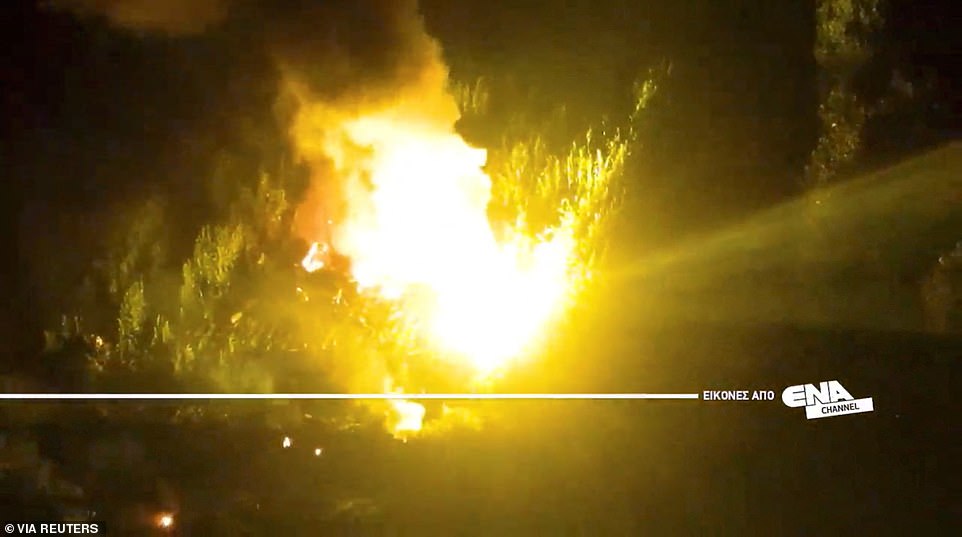 Drone footage shows the flaming body of the plane after the crash in Kavala, north Greece 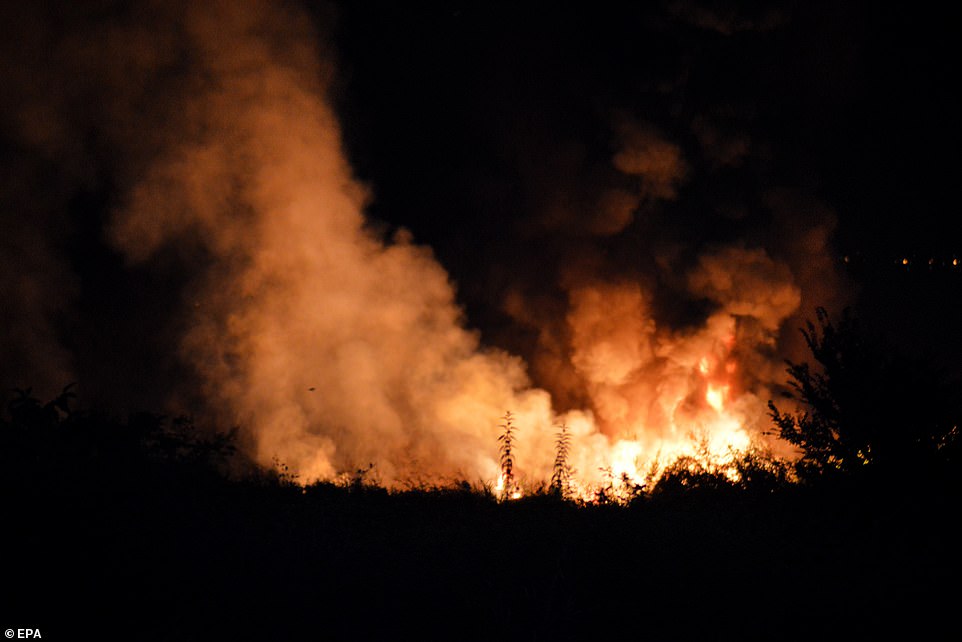 A Ukrainian cargo aircraft which had eight people on board was already on fire before it crashed last night near the city of Kavala in northern Greece , footage shows. Pictured: Flames and smoke are seen at the area where an Ukraine Antonov cargo aircraft has crashed in the Paleiochori area, west of Kavala 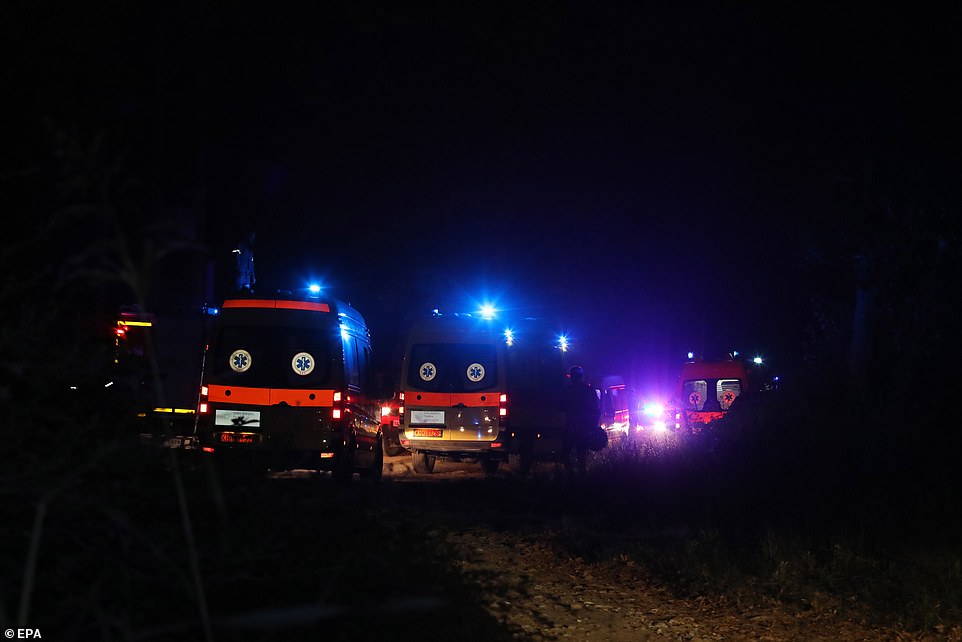 The Antonov An-12, owned by Meridian, exploded in a burst of flames while it was flying from Serbia to Jordan with ‘dangerous materials’ believed to be explosives onboard. Pictured: Ambulances are seen at the area where an Ukraine Antonov cargo aircraft has crashed in the Paleiochori area, west of Kavala, north Greece last night

A senior source at Jordan’s civil aviation regulatory commission (CARC) denied earlier reports that the plane was headed to Jordan.

The wider area in Greece where the aircraft crashed has been cordoned off since Saturday night.

Residents nearby have been advised to keep windows and doors shut and avoid the area of the incident.

The fire service has cordoned off the area at a radius of about 400m.

The mayor of the municipality of Paggaio, to which the two villages close to the crash belong, closed nearby roads.

Eye-witnesses said the Antonov An-12 was on fire and that they had heard explosions, Athens News Agency reported.

A local man, from the mountainous region, Giorgos Archontopoulos, told state broadcaster ERT television he had felt something was wrong as soon as he heard the aircraft’s engine.

‘At 10.45pm I was surprised by the sound of the engine of the aircraft,’ he said. ‘I went outside and saw the engine on fire.’

Locals, who reported seeing a fireball and a plume of smoke, and Greek media think the plane was carrying explosives.

State broadcaster ERT reported that army explosive experts were en route to the site, located on farmland close to two villages that are part of the Paggaio municipality.

It also said villagers are saying it was already in flames before it crashed and ERT has been told its cargo ‘was dangerous’.

Police were asking journalists at the scene to wear masks, the report added.

‘You need to go away for your safety. There is an information that the aircraft was carrying ammunition’, one firefighter told reporters at the scene.

Filippos Anastasiadis, mayor of the nearby town of Paggaio, told Open TV: ‘The aircraft crashed around two kilometres (one mile) away from an inhabited area.’

He also told AP: ‘We were hearing explosions until a few minutes ago. I am about 300 meters from the site of the crash.’

A total of 15 firefighters and seven engines were deployed to put out the blaze that broke out after the crash with more rescuers on their way. 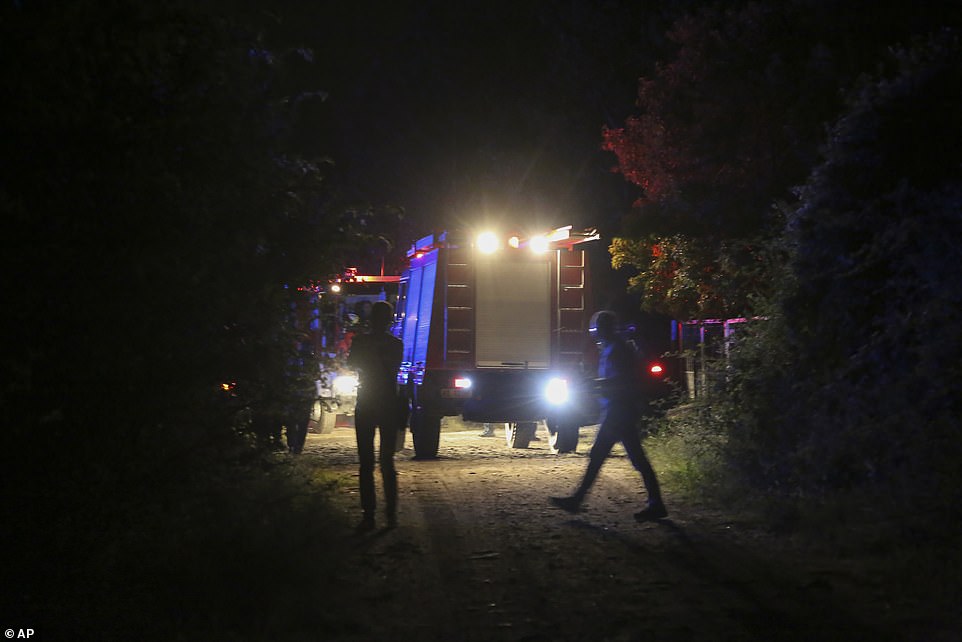 Firefighting vehicles are seen near the site of a plane crash, a few miles away from the city of Kavala, in northern Greece on Saturday 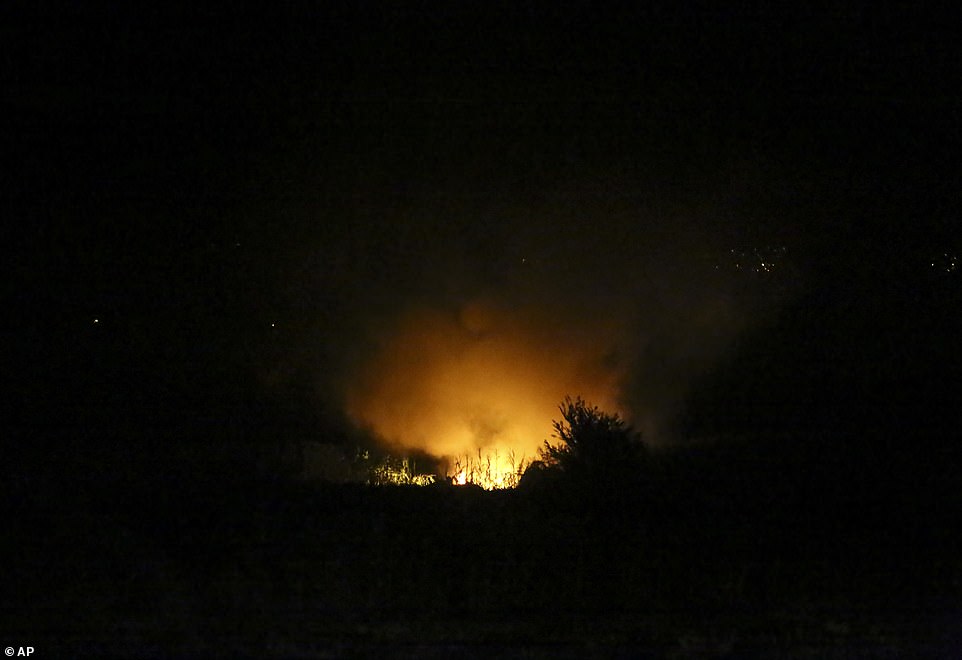 Flames are seen at the site of a plane crash, a few miles away from the city of Kavala, in northern Greece yesterday 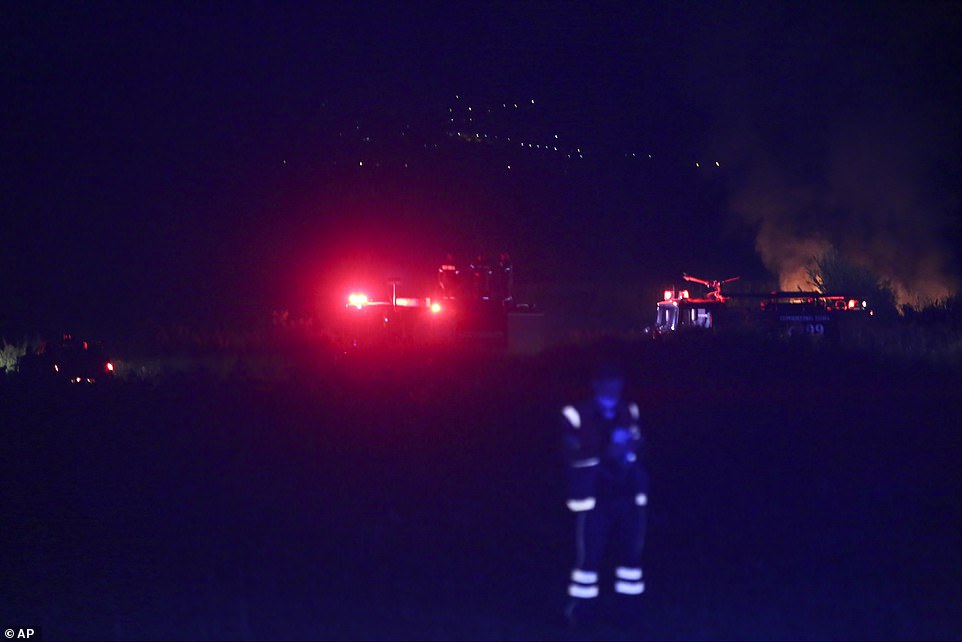 A night view taken yesterday of the site of a plane crash, a few miles away from the city of Kavala

It was not clear what the aircraft’s cargo was but the special disaster response unit was also investigating the scene.

‘We are treating the cargo as dangerous material,’ said a fire brigade official.

The fire service has cordoned off the area and has been finding it difficult to approach the scene.

The pilot managed to alert authorities about a problem in one of the plane’s engines and he was given the choice of landing in either the Thessaloniki or Kavala airports.

He opted for Kavala, which was closer, but the plane crashed about 25 miles west of the airport, Greece’s Civil Aviation authority said.