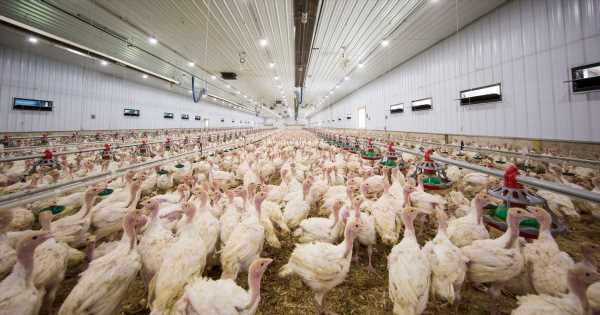 Millions of Brits are facing Christmas without turkey as the bird flu outbreak continues to spread across the UK, it has been revealed.

Farmers have warned that the disease could cause "carnage" over the winter period as fears mount on what will be available during festivities.

The alarming outbreak, which is said to be the worst in UK history, has seen over three million turkeys been culled so far.

In response to the crisis, special protection zones have been put in place in Norfolk, Suffolk, parts of Essex and the whole of the south-west of England.

The Government currently warns the risk from bird flu is medium, reports The Mirror.

A statement on gov.uk reads: “The risk of incursion of highly pathogenic (HPAI) avian influenza H5 in wild birds in Great Britain remains at medium (that is, event occurs regularly).

“The risk to poultry with stringent biosecurity is maintained at low (with low uncertainty).

“However, the risk to poultry exposure to HPAI H5 in Great Britain with suboptimal biosecurity has been increased to medium (with medium uncertainty), in light of the increased number of infected premises observed during September and the distance of some of these, as well as some wild bird cases, from the coast.

“The UK Health Security Agency (UKHSA) has said that avian influenza is primarily a disease of birds and the risk to the general public’s health is very low.”

The Daily Mail reports James Mottershead, chairman of the National Farmers' Union poultry board, as saying the disease could cause major disruption at Christmas.

“If bird flu gets into turkeys that could cause holy carnage; that could cause real supply chain issues in the run-up to Christmas,” he said. “I know of some instances where seasonal turkey producers have been affected.”

He added farms that have an outbreak and are classed as infected could have to stop raising birds for up to a year.

The Department for Environment, Food and Rural Affairs said officials were working to “eradicate the disease as quickly as possible”.

Around one billion birds are farmed in the UK each year and other species, such as ducks, are also at risk.

James Coleman, who has had to cull 20,000 ducks at his Devon farm, told Sky News: “At the moment everybody in the industry is just on tenterhooks constantly.”

He said Defra needed to conduct a “massive review” of its handling of the outbreak and offer financial aid to farms forced to shut down.