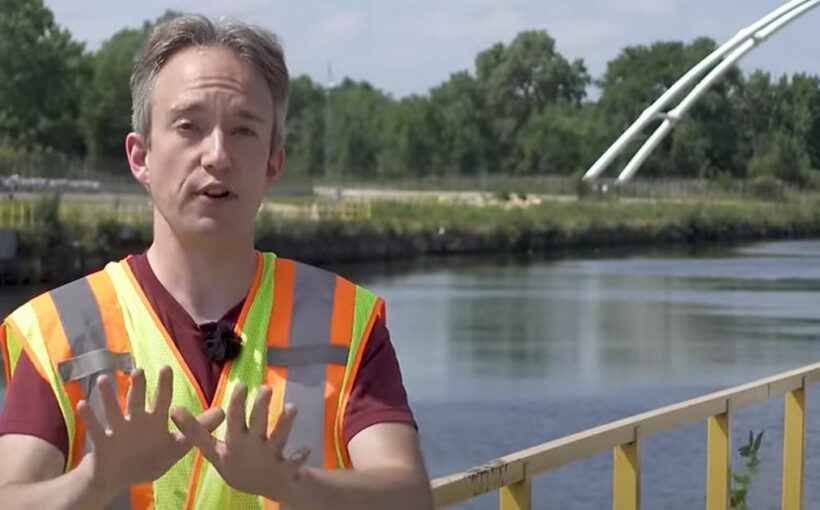 In order to stem a potentially devastating infestation of enormous carp destroying America's Great Lakes, the US army has built an electric barrier that has turned a stretch of canal into one of the most hostile places on earth.

In the mid-20th century, wastewater plants began to import species of carp into their reservoirs to consume algae.

However, during flooding, these massive fish escaped into neighbouring water systems and became dominant, out-competing all in their area and threatening a biological disaster.

In the Missippi and Illinois rivers, these massive fish now make up a staggering 95% of the fish biomass and scientists have engineered an ingenious if brutal solution to stop them from spreading further.

YouTuber Tom Scott travelled to Romeoville, Illinois at the foot of America's imposing Great Lakes to inspect Chigaco's sanitary and ship canal which has become a zone of death for the 30kg fish.

The waters of the chokepoint, which offers access to the great legs are ground zero for amphibious life.

The US Marine Corps have installed a fearsome set of electric barriers under the river that kill any carp in their tracks.

On the rare occasions this machine is turned off for maintenance, officials ensure nothing can swim past by pouring toxins into the water.

If a fish swims into the barrier, the electric current will stun them and they will float downstream none the wiser of what happened.

If a human was to fall into the water around the barrier, they could expect pretty severe side effects including cardiac arrest.