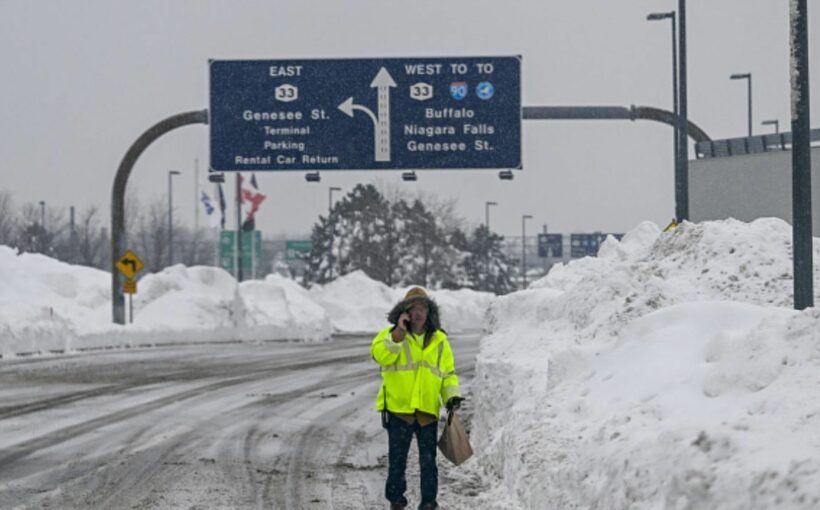 A large part of the US is preparing for another snow storm this week which threatens to bring more dangerous conditions to the north east. The wintry conditions will add to what has already laid in the previous day in a storm surge which killed at least two people who were travelling in treacherous weather. This sparked thousands of school closures across New York and Maine, or delays to opening times, with speed limits being implemented on particularly hazardous roads.

According to Accuweather, heavy snow “weighed down tree limbs and power lines” causing major outages yesterday for “tens of thousands of people” in New Hampshire and Maine.  The running total of those without access to electricity sat at 27,000 by the afternoon.

AccuWeather meteorologists said: “Snow lovers will be in luck across the Northeast this week. Although the snow drought is expected to continue across parts of the Interstate 95 corridor, another storm is expected to bring more snow to the interior Northeast later this week.”

But with such a violent frontal system dominating north eastern US states, what does this mean for Britain? Jim Dale, a senior meteorologist for British Weather Services gave Express.co.uk a detailed explanation as to how much it can influence the UK’s mercury, if at all.

He said: “It’s a major deep low tracking across the Central Plains into the North East over the next few days and even into the weekend. There is everything involved in terms of heavy rain, big snow tornado risks and stormy winds.

“The north east itself picking it all up on Wednesday and particularly through Thursday, as the low tracks over them. Snow, high winds, tidal surges.”

Mr Dale said these extreme conditions will not translate to the UK from across the Atlantic, however, it can make precise forecasting harder, he claimed. “There is little connection to that storm and us bar to say it complicates matters for our own colder spell,” he added.

“It makes things more complex and uncertain with potentially lows tracking further north as they move across the Atlantic.

“There is always an influence of one kind or another, direct or indirect. In this case it’s likely to be indirect but it could end up keeping the cold weather to be less pronounced. Time will tell.”

Mr Dale said yesterday that the UK was anticipating another cold spell at the start of February. This, he said, could see snow hit Scotland and northern regions from February 2 – lasting around a week.

He said: “It’s more like February 2 and 3 when it’ll start unwinding with snow into February 4 and 5. Again northern areas most at risk but universal frosts/ice will be deep for Scotland and the north. The polar front will be down near the north Mediterranean by then so it’s moderated Arctic air all the way.

“It looks set for at least a week so it won’t be a one-day wonder.” He said Scotland will cop the brunt of it with northern England and Wales “coming a good second.” He confirmed other more southerly areas would have to wait and see.

Weather maps show nearly all of Britain set to see some form of snow – and Mr Dale said if this weather front gains traction, it has the potential to cause quite a bit of disruption. He added: “Certainly for Scotland and parts of the north, if it comes off as currently seen. There is every potential for disruption on top of high energy usage.”

Looking ahead into the middle of February, the Met Office long-range forecast offers some indication of what’s to come. From February 7 to 21 it says: “During the period, generally changeable weather conditions are expected across the UK.

“Temperatures overall will be near normal, but colder with possible overnight frost at first.”