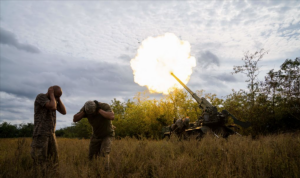 The destruction of the fuel storage unit took place in the Eastern region of Ukraine. There have been no reports of Russian casualties, and there appear to be no Russian military personnel on the ground during the scene of the attack. Ukraine’s military managed to target another vital resource for Russian troops, whilst filming the destruction on what appears to be a military drone. The attack comes in the wake of heightened tensions between the two neighbouring countries, as both have been ramping up war efforts which have intensified the ongoing battle.

It is still unknown what weapons were used to target the Russian passion but users online have been speculating that it may be Western gifted HIMARS.

The strike caused the fuel storage unit to explode dramatically, and thick grey smoke began immediately billowing up into the sky on impact.

A small fire can be seen burning away at the reminiscence of the highly flammable site.

Users on social media have been reacting to the video clip.

@Jlsnogood wrote: “The landscape of Ukraine is so pretty. Without Russians, it would even be more pretty.”

@Scorpionclaus said: “Just off-topic, but I wonder what environmental impact will be of this war..not only tiny parts of vehicles ppl will find in the next 30 years in the soil.”

@DimitryLeschi1 wrote: “Oh good shot. Keep it up. Everyone in the West is supporting you.”

READMORE:Spy chief warns that China’s control of cyber technology ‘poses a threat to us all’

There have been ongoing reports of Russian losses, and experts have been confirming them.

Sir Jeremy Fleming will explain in his keynote address that Russia is experiencing major losses in Ukraine.

Sir Jeremy will add: “Their gains are being reversed. The costs to Russia – in people and equipment are staggering.

“We know – and Russian commanders on the ground know – that their supplies and munitions are running out.

“Russia’s forces are exhausted. The use of prisoners to reinforce, and now the mobilisation of tens of thousands of inexperienced conscripts, speaks of a desperate situation.”