Home » World News » Weather forecasts MAJOR downpours: Where will it rain in the UK this weekend? 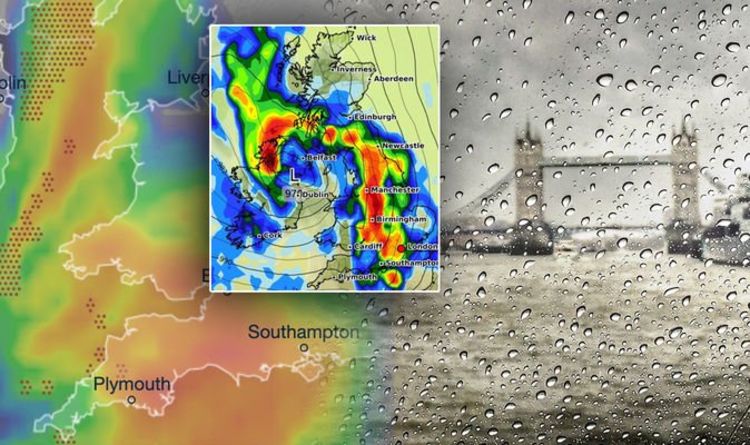 While this week is due to stay dry and relatively warm for this time of year, the weekend will bring cooler temperatures and plenty of rain according to the latest maps. Maps show low pressure arriving on Saturday morning from the southwest, coming across Ireland and hitting Britain by the middle of the morning.

According to graphs from WX Charts, Britons could suffer rainfall approaching 5mm at the weekend, particularly those in northwestern parts of the country.

The low pressure is also set to bring strong winds, which will stay in place throughout much of Saturday, with most of central England and Wales expecting downpours.

Eventually the low will move upward to northeast Scotland overnight.

On Sunday there will be patchy rain across Wales and England, most concentrated on the west coast at the start of the day and through lunchtime into the afternoon

Later in the evening, patches of rain will fall in and around Manchester, as well as the south of Wales and across the northern coast of Devon and Cornwall.

The northwest of Scotland is expected to see plenty of rain on Sunday, with more eastern areas expected to stay mostly dry as the weekend draws to a close.

However, NetWeather has predicted the weather overall will be unpredictable across the weekend.

NetWeather meteorologist Jo Farrow said: “If you have outdoor plans for the weekend don’t hold too tight to any weather app timings of when it will and won’t rain.

“The low showing for southern Britain on Saturday may end up being earlier or later or deeper, so further north or flatter, less developed and staying over the Channel.”

Following the weekend, it looks like autumnal weather will be here to stay.

“This will bring organised bands of rain, heavy at times, interspersed with cooler and showery periods but some sunny spells too.”

The first half of October will experience low pressure which will result in showers or longer spells of rain.

Strong winds are also very likely at this time of year, especially in areas along the coast.

Temperatures are expected to fall to a low as 3C at the beginning of October, with the coldest temperatures expected in the north and Wales.

Due to the cold snap expected to hit the UK, anomaly charts predict temperatures dropping by 4C below what is usually expected for early October.

The Met Office stated for the period on October 3-12: “Temperatures are likely to start out slightly below average, before returning to near average later in the period.”

For the rest of October, a persistent washout is expected for swathes of the UK.

Temperatures are expected to stay low due to long-lasting low pressure.

Rain and wind are also expected to stick around across all parts of the UK.