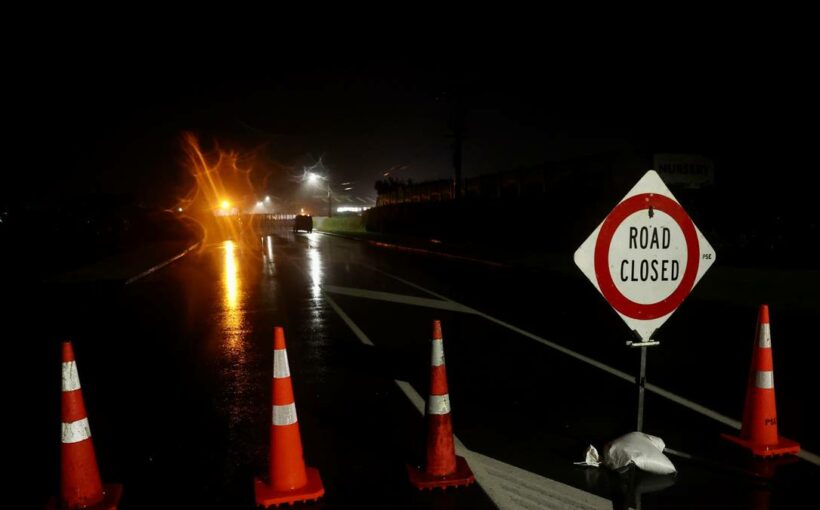 The Army has been brought in on the West Coast of the South Island after a state of emergency was declared in the Buller District following torrential rain and warnings for people to evacuate to higher land.

The Army has tonight deployed 14 personnel and seven vehicles from Burnham Military Camp in Canterbury to assist with evacuations following flooding.

“We currently have two liaison officers at the Greymouth Emergency Operations Centre. More personnel are en route to Westport to assist in evacuations tonight.

“Two of those personnel will base themselves as liaison officers at the Buller Emergency Operation Centre,” the army said in a statement.

Residents whose homes are prone to flooding are being told to have a grab bag handy to evacuate to higher ground.

He told RNZ the Buller River is currently running at a 50-year flood level, and it is tracking towards a once in 100 year event.

“The key risk area is overnight, so with the river’s already running high we’ve got another 200-280 millimetres of rain forecast in the next 36 hours so it’s highly likely that the river will continue to rise.”

He said the state of emergency declaration will allow emergency services to swing into action as they start to look at areas which may need to be evacuated later today.

The state of emergency follows a rare “red warning” being issued by MetService for parts of the West Coast, with residents facing heavy rain, flooding, slips and possible thunderstorms.

It is only the third “red warning” since 2019 and covers part of Buller and Westland, north of Fox Glacier, from 9pm last night to 6am on Saturday.

“A red warning is in force for significant heavy rain from central Westland to Buller. Flooding is likely, as are slips and disruption to transport. Some communities could become isolated, and livestock should be moved to high ground,” MetService said.

It also said up to 400mm of rain in the ranges, and 200mm on the coast, is expected to fall through to Saturday morning.

The red warning – reserved only for the most impactful weather events – was issued in consultation with Civil Defence and regional authorities.

There have been two slips on State Highway 73 – one at Rocky Point and one at Otira.

The West Coast Civil Defence is asking people at the Gladstone and Russell streets intersection and nearby areas, and those who live on Colvin, Rintoul, Menzies, Roebuck, Bentham, and Disraeli streets, or in the Westport Domain Area, to voluntarily evacuate.

An evacuation centre have been set up at South School.

The crunch could come at tomorrow’s 3.40am high tide.

Fire and Emergency said crews in Westport have been helping with precautionary evacuations of residents in low-lying areas of the town today.

It has activated its regional coordination centre in Christchurch and an Urban Search and Rescue squad has arrived on the West Coast in case there is a need for rapid assessments in the event of storm damage.

The West Coast Regional Council has recorded up to 267mm of rainfall in the Buller district in the past 24 hours.

The road to and from the West Coast is closed at Arthur’s Pass.

The road between Hokitika and Haast has surface flooding – so caution is recommended for drivers.

MetService has also issued a spate of weather warnings for other parts of the country – from 140km/h gales in Wellington to heavy rain and strong wind in Taranaki.

Motorists are being warned the wind has already picked up on the Remutaka Hill Rd and the Desert Rd, with those in high-sided vehicles or on motorcycles told to take extra care.

Strong winds are also beginning to buffet the lower half of the North Island as torrential rain falls in the South Island.

The Insurance Council of New Zealand is warning West Coasters to check their property now for the wild weather starting to hit the region.

“There are some simple things you can do that don’t cost anything that will help make sure you and your property stay safe,” says chief executive Tim Grafton.

“High winds cause trees to come down on roads, fences, cars and houses which creates havoc.Our infrastructure in many towns and rural areas are unable to cope with the weather we are facing this century, which causes widespread flooding and damage.

“Many West Coasters are either living near rivers or the sea and are used to dealing with heavy rainfall and know what to do.Farmers should secure irrigators and machinery as well as light structures and move property and stock to higher ground” he said.

Overnight weather stations in the region measured more than 140mm rainfall, with MetService warning there was “plenty more to come”.

It warned flooding was likely while slips could close roads, disrupting transport routes and isolating communities.

The red warning was prompted by an active front moving across southern and central New Zealand and preceded by heavy rain for western areas.

MetService meteorologist Andy Best said the warning was issued due to the amount and intensity of the rain.

“It is of particular concern for people who are on the roads,” he said, urging anyone going away for the school holidays to check the weather conditions before venturing out.

This morning winds across the lower North Island were starting to ramp up with severe northwest gales reaching up to 140km/h expected to batter the capital and 120km/h in southern Wairarapa from this afternoon.

Taranaki would also be hit by powerful gales from tonight.

MetService says the gales are expected to be damaging, bringing down trees and powerlines and sending unsecured structures airborne.

Heavy rainfall warnings were in place for the headwaters of the Canterbury lakes and rivers from the Rakaia river northwards, and between Aoraki/Mt Cook and the Rakaia River, Nelson, west of Motueka, and the western ranges of Marlborough.