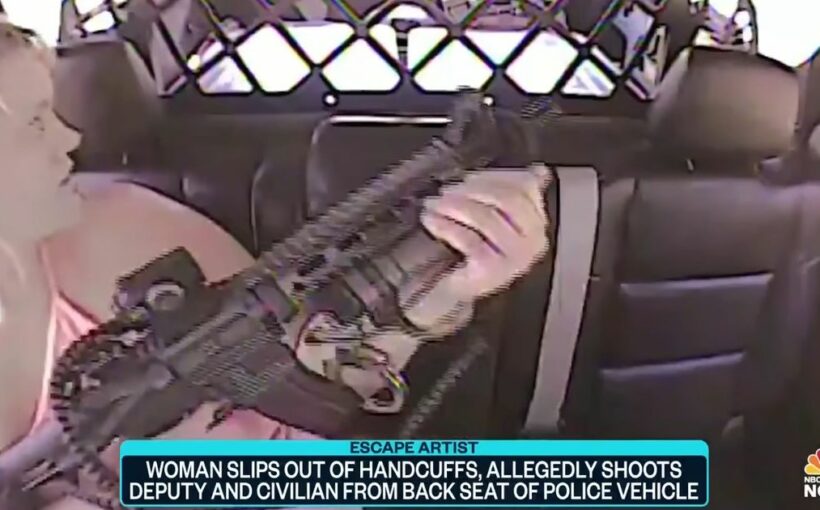 A woman from the US is facing up to life in prison after freeing herself from handcuffs in the back of a police car, before finding and unlocking a rifle, which she used to shoot a cop and a member of the public.

On August 12, Rachel Zion Clay, 36, had been apprehended and cuffed after “crawling about on her hands and knees in a backyard and howling” in the Grady County area of Oklahoma, with police saying they did this for her own safety.

But it was while officers were taking a statement from civilian witness Dale Moses, that Clay managed to wriggle free of the handcuffs, before reaching inside the console of the patrol cruiser, where she found the gun-release switch and unlocked a police AR-15 rifle, with the incident being captured on a dashcam from inside the vehicle.

READ MORE: Britain under attack from 'drunk' German wasps that 'go nuts' and sting for no reason

She then fired around 10 rounds, hitting a deputy as well as Moses, although neither suffered life-threatening injuries.

What then followed was a three-and-a-half hour stand-off, with Clay barricading herself in the car and firing at the patrolmen, before she eventually surrendered following lengthy negotiations and after the arrival of an armoured truck.

Grady County Undersheriff Gary Boggess revealed: “While in the back seat of a patrol car, she was able to get her wrist free from the handcuffs and the handcuffs were put on properly.

“There’s several switches, one is a gun switch to unlock the gun lock and she found it, unlocked it, and was able to retrieve an AR-15 rifle.

“Then she was able to figure out how to put a round in it, put it on fire and she fired approximately 10 rounds at our deputies and a civilian.”

Once she had given herself up, she was then taken into custody, while she also tested positive for methamphetamine and is being charged with three counts of shooting, with the intent to kill, and is being held on a $1million (£850,000) bond.

There were several notes found in the vehicle, which revealed that Clay was in a disturbed state of mind at the time.

She could now face anywhere from two years to life in prison, while Boggess is recommending a number of safety changes following the incident.

He said: “One, I will say, is our console where it actually said ‘gun’. She was able to see that. That’s going to be replaced. We’re going to put a switch someplace else in the vehicle to lock our gun.

“It’s one of these… I’m not going to say one in a million, but you know, it’s one of those deals that, you know, once it happens, then you go back and try to make sure it never happens again.”